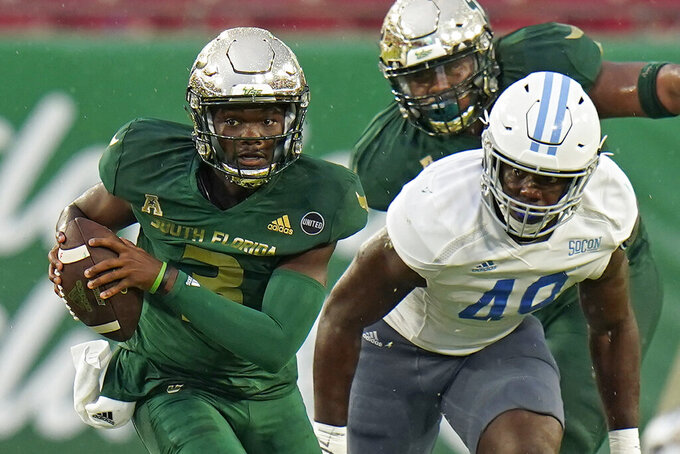 Last week was the Sun Belt's time to shine. This week, the American Athletic Conference gets its chance to plant its flag.

The conference that prides itself on being “Power Six” will get only a few opportunities to prove it this season. The Power Five conferences have decided to play mostly league games as a way to navigate the inevitable pandemic-related disruptions.

The American, which is always looking to punch up, gets four cracks at Power Five teams this season — all this week: No. 14 UCF is at Georgia Tech; South Florida visits No. 7 Notre Dame; Tulsa is at No. 11 Oklahoma State; and, in a late add to the schedule, Houston faces Baylor.

That's one favorite (UCF), one small underdog (Houston) and two long shots (USF and Tulsa). A good week could help bolster the American's case later in the season for big-time bowl bids. Maybe even a spot in the College Football Playoff.

The Sun Belt made its mark last week when Louisiana-Lafayette won at Iowa State and Arkansas State beat Kansas State. Coastal Carolina knocking off Kansas was less impressive, but still 3-0 against the Big 12 looks nice.

A split of its Power Five games this week would be a solid response by the American.

Could be a good day for Clemson to get some work for freshman QB D.J. Uiagalelei, the heir apparent to Trevor Lawrence ... CLEMSON 52-6.

The Bearcats, the American's other preseason favorite, eases into its season ... CINCINNATI 45-7.

Knights had both North Carolina and Georgia Tech on their original schedule, but the homer date against the Tar Heels was dropped — which is sort of typical for their schedule luck ... UCF 31-14.

An early test to sort out potential ACC contenders ... MIAMI 24-21.

No. 19 Louisiana-Lafayette (minus 17) at Georgia State

Ragin' Cajuns need to keep their keep their guard up after a big upset ... LOUISIANA-LAFAYETTE 31-17.

In a sport where nonconference games are often scheduled more than a decade out, the Cougars and Bears put this together a week before kickoff ... HOUSTON 31-28.