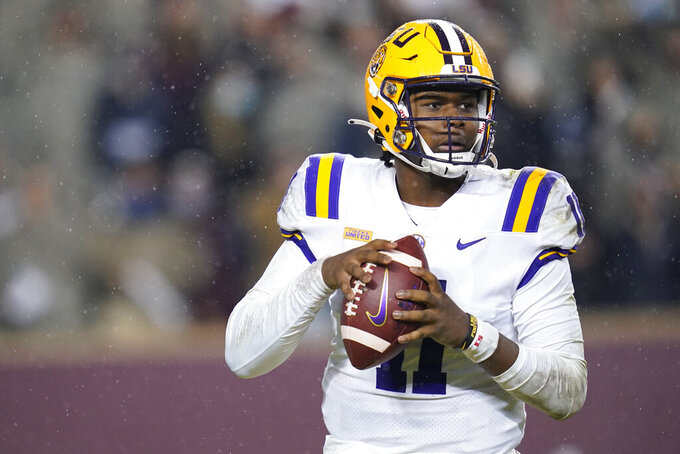 Alabama-LSU has in 13 months gone from Game of the Century to not even as interesting as BYU at Coastal Carolina.

The top-ranked Crimson Tide visit the defending national champion Tigers on Saturday for a game that is likely to be a name-the-score blowout for Alabama, which is favored by more than four touchdowns.

Looking for a game matching ranked teams this week? Try Conway, South Carolina, for a battle of unbeatens. No. 14 Coastal Carolina faces No. BYU in a game that was finalized Thursday after No. 25 Liberty had to cancel its trip to Conway because of COVID-19 issues.

That’s where ESPN’s “College GameDay” will be Saturday.

As for the Tigers and Tide, it was a No. 1 vs. No. 2 matchup in Tuscaloosa last season. Joe Burrow and LSU broke an eight-game losing streak in the series with a thrilling victory that vaulted LSU to a national title.

The last time LSU faced Alabama as an unranked team was 2001, when neither was in the poll. An unranked LSU team last faced a ranked Alabama team in 1999 and the 12th-ranked Tide won 23-17.

Irish needed a win over the Orange to clinch a spot in the ACC title game until the league decided to eliminate the Irish's last game; that should tell you how much of a forgone conclusion this one is ... NOTRE DAME 45-7.

If the Buckeyes can play, the next question is: What players are unavailable? ... OHIO STATE 39-13.

Tigers have won three straight and four of five in the series ... AGGIES 24-19.

Hurricanes could still earn a spot in the ACC title game if Clemson loses ... MIAMI 41-20.

Will the Commodores get close enough to the end zone this week for soccer player-turned-kicker Sarah Fuller to attempt to score? ... GEORGIA 45-7.

Cyclones have all but locked up a spot in the Big 12 championship game and now are long-shot playoff contenders. Very long shots, but still ... IOWA STATE 24-14.

Sooners have won six straight against the Bears, including two last year by a combined 10 points ... OKLAHOMA 48-17.

Undefeated Thundering Herd has not played since Nov. 14 ... MARSHALL 35-7.

Horned Frogs need a victory to avoid three straight losing Big 12 seasons for the first time since joining the conference in 2012 ... OKLAHOMA STATE 28-24.

No. 20 Louisiana-Lafayette (plus 2 1/2) at Appalachian State

Mountaineers have won all eight meetings, including the last two Sun Belt championship games, against the Ragin' Cajuns ... LOUISIANA-LAFAYETTE 27-24.

Golden Hurricane clinch a spot in the AAC title game with a victory ... TULSA 28-20.

Cardinal will relocate to the Northwest to escape COVID-19 restrictions in Santa Clara County ... WASHINGTON 28-14.

Hawkeyes have won four straight overall and six straight against the Illini ... IOWA 24-14.

Arkansas (plus 3) at Missouri — @lakehog_stephen

Tigers have won four straight and five of six in the series since they joined the SEC, which kind of sums up the Razorbacks' recent struggles ... ARKANSAS 28-26.

Scarlet Knights have desperately wanted this to be a rivalry, but the Nittany Lions have won 13 straight dating back to 1988 ... PENN STATE 38-21.