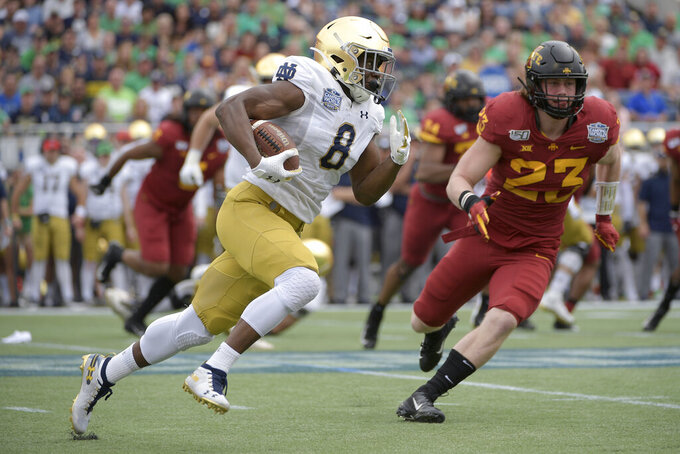 FILE - Notre Dame running back Jafar Armstrong (8) rushes for yardage in front of Iowa State linebacker Mike Rose (23) during the first half of the Camping World Bowl NCAA college football game Saturday, Dec. 28, 2019, in Orlando, Fla. With all the success Notre Dame has enjoyed its last three seasons, amassing a 33-6 record under coach Brian Kelly, it has been the inability to run the football successfully in big games that has curtailed the championship hopes of the Fighting Irish. (AP Photo/Phelan M. Ebenhack)

Under even normal circumstances, season-opening games can be deceiving. After an offseason that was anything but normal, who knows what to glean from a Game 1?

Sure, BYU looked awesome, but Navy spent its preseason tackling bags and blocking dummies to limit possible exposure to the coronavirus. Army was a machine against Middle Tennessee, which had its opening opponent change three times because of pandemic-related schedule alterations.

The Labor Day weekend launch of the college football season was whittled down to an appetizer but this week, the Big 12 and Atlantic Coast Conference get involved. Or at least try to: Three games involving Big 12 teams this weekend have already been postponed. TCU did not have enough available players to face SMU. Louisiana Tech had an outbreak, so no trip to Baylor. And No. 15 Oklahoma State's opener against Tulsa was pushed back a week because the Golden Hurricane did not have enough practices to prepare.

That's not many but there will be major changes when the new Top 25 comes out Sunday, regardless. For the preseason Top 25, voters were permitted to include all teams. Now that the season has started, only teams scheduled to play this fall will be eligible. Nine Big Ten and Pac-12 teams will need to be replaced.

Welcome to the 2020 football season. It's going to be weird. Hopefully, weird is the worst of it.

Missouri State (no line) at No. 5 Oklahoma

Longhorns have won all five meetings against the Miners, average score 39-7 ... TEXAS 39-7.

Maybe the most interesting game of the weekend. The Ragin' Cajuns won 11 games last season and much of that team is back ... IOWA STATE 31-21.

Coastal Carolina (plus 7) at Kansas — @DanaBecker

Another new era begins for the 'Noles as Mike Norvell coaches his first game with Florida State ... FLORIDA STATE 28-17.