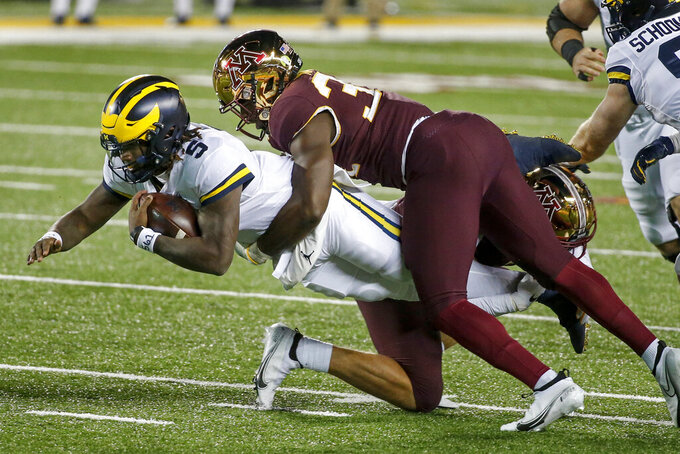 After the big game, comes the validation game.

Week 9 of the college football season — or maybe Week 8 depending how you count in this odd season — features several teams that made statements last week looking for strong follow-ups.

No. 6 Oklahoma State took control of the Big 12 with a staunch defensive effort against Iowa State last week. This week, the Cowboys get to back it up with Texas coming to town on Halloween.

No. 13 Michigan unveiled an imposing new quarterback, directing an explosive offense, in a road blowout of Minnesota as the Big Ten opened play. The Wolverines return home this week to face rival Michigan State. Let's see how Joe Milton does in his first start in the Big House.

No. 17 Indiana had its most notable victory in more than three decades with a wild overtime upset of Penn State. The Hoosiers go to Rutgers on Saturday, which seems like a good place to build on a great start. Not so fast. The Scarlet Knights also won their opener, knocking off Michigan State to end a 21-game Big Ten skid.

After two weeks of Big Ten football, either Indiana or Rutgers will be tied for first place in the East, one of the toughest divisions in the country.

Tigers have won nine straight in the series and the Eagles have only scored more than 17 points once during the streak ... CLEMSON 42-14.

Mississippi State (plus 30) at No. 2 Alabama

Nittany Lions have only beaten the Buckeyes once since 2016, but no Big Ten team has consistently played them closer over the last six years ... OHIO STATE 31-21.

Fighting Irish have a second straight road trip and Clemson on the horizon; only question is whether they have their full attention on Tech ... NOTRE DAME 38-17.

Cowboys and Longhorns have played three times before when Oklahoma State is ranked and Texas is not; Cowboys went 3-0 in those ... OKLAHOMA STATE 27-21.

Razorbacks have been the turnaround story of the SEC so far, but beating the Aggies would push it to another level ... TEXAS A&M 31-14.

Cougars have buried almost everyone on their schedule so far, with an average margin of 31 points ... BYU 42-10.

Wolverines looked really good in their opener and the Spartans were quite bad; Does the truth lie somewhere in between? ... MICHIGAN 35-14.

Tar Heels RBs Javonte Williams and Michael Carter have been the most productive duo in the country, averaging 229 yards rushing per game ... NORTH CAROLINA 38-23.

Oddsmakers are not buying the Wildcats' strong start ... WEST VIRGINIA 28-27.

If the Hoosiers can avoid turning it over seven times the way Michigan State did against the Scarlet Knights, they should be OK ... INDIANA 28-13.

Hard to get a read on Navy, which has been blown out several times and won some close games ... SMU 35-17.

Average score of the last three games of the series played in Lubbock: Oklahoma 53, Texas Tech 45; These Red Raiders might not be able to keep up ... OKLAHOMA 45-23.

Falcons have beaten the Broncos in two of three meetings at the academy ... BOISE STATE 28-17.

Hawaii (minus 1) at Wyoming — @AidenTugman

Green Wave is on a three-game losing streak, where it has allowed 46.3 points per game; Owls are banged up including QB Anthony Russo ... TULANE 35-30.

LSU (minus 3) at Auburn — @SportsMasterDan

Huge swing game that allows the winner to still salvage a solid season and leaves the loser with three losses and Alabama and Texas A&M still on the schedule ... LSU 38-37.