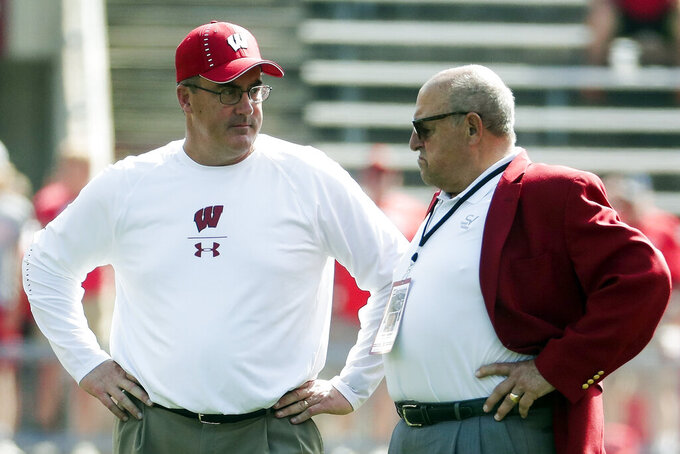 FILE - In this Sept. 15, 2018, file photo, Wisconsin head coach Paul Chryst, left, talks to athletic director Barry Alvarez before an NCAA college football game against BYU in Madison, Wis. Wisconsin announced Saturday, May 9, 2020, it is asking 25 of its highest-earning employees to volunteer for a 15% pay cut over the next six months. That group includes athletic director Barry Alvarez, football coach Paul Chryst and men's basketball coach Greg Gard. There won't be any reduction of work hours. (AP Photo/Morry Gash, File)

MINNEAPOLIS (AP) — With the end of this virus-disrupted school year drawing nearer, a predictably bleak financial outlook for major college sports has emerged from the budgeting process.

The West Virginia athletic department announced Friday a projected $5 million shortfall, with pay cuts for coaches and staffers queued up in response.

There's a $4 million deficit in the Minnesota athletic department's forecast for the fiscal year ending June 30, and athletic director Mark Coyle said Friday “no doubt, everything is on the table” for cost-savings consideration. High earners there have already agreed to pay cuts and hiring and spending freezes have been enacted, but future measures like travel reduction could also lead to the elimination of sports programs.

In February, before the virus outbreak caused the cancellation of the NCAA basketball tournaments and the corresponding sharp decrease in revenue, the Gophers were forecasting a $1 million surplus for the 2019-20 fiscal year thanks in part to a surge in football ticket sales and fundraising related to a strong 2019 season for that team. Now they're likely to finish in the red, Coyle said at a Board of Regents meeting conducted by video conference.

“We’re trying to be incredibly nimble with our response,” Coyle said.

Minnesota's $123 million budget is the eighth-largest in the Big Ten, trailing in order Ohio State, Michigan, Penn State, Wisconsin, Nebraska, Michigan State and Iowa. The Gophers have 25 varsity teams, the fourth-most in the conference. Both regents during the meeting and reporters in a news conference afterward asked Coyle about cutting sports from an overall program that has enjoyed sustained, national success in sports like volleyball, wrestling and softball. Coyle kept to the script and did not offer many specifics, but clearly such a measure would be a last resort for a department that has long held a strong sense of pride in the diversity of the Gophers program.

“I would argue we have maximized our revenue better than most across the country,” Coyle said.

The Gophers were ahead of the curve in some areas. Three senior staff members departed the university for other jobs and were not replaced. Still, difficult decisions will have to be made in the coming weeks as the projected 2020-21 budget cycle approaches.

The cancellation of the NCAA men’s basketball tournament cost schools a collective $375 million. Minnesota's athletic department is bracing for a $75 million loss of expected revenue in the worst-case scenario of no fall sports and thus no televised football games. Games played without fans admitted projects to a $30 million drop in revenue. The best-case scenario of campus reopening in the fall and sports played as scheduled would bring an estimated $10 million hit. Those figures don’t account for reduced expenses in travel and other areas due to the pandemic.

“We’re not alone in this situation,” deputy AD and chief financial officer Rhonda McFarland told the board. “There are only a handful of athletic departments that could manage a $30 million loss and likely very few that would survive $75 million reduction in revenue. That is the nature of the national landscape at this time.”

Wisconsin announced Saturday it is asking 25 of its highest-earning employees to volunteer for a 15% pay cut over the next six months. That group includes athletic director Barry Alvarez, football coach Paul Chryst and men's basketball coach Greg Gard. There won't be any reduction of work hours.

Also, most employees would be participating in a state work-share program in which hours will be reduced by 20% or 50%.

Wisconsin's plan tentatively takes effect May 18 and runs through July 25. School officials believe the plan should save the athletic department about $2.8 million.