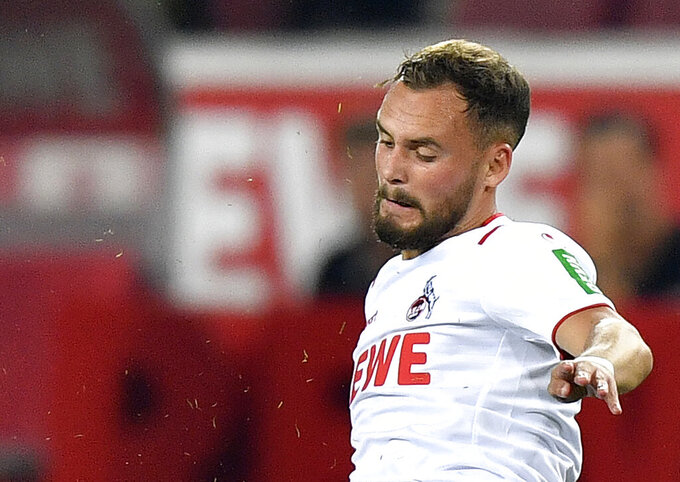 FILE - In this file photo dated Friday, Aug.23, 2019, Cologne's Birger Verstraete during the German Bundesliga soccer match against Borussia Dortmund, in Cologne, Germany. Cologne said Sunday May 3, 2020, that Verstraete had given a false impression about training safety measures to protect against the coronavirus at the club, in an interview he gave Saturday with Belgian TV station VTM. (AP Photo/Martin Meissner, FILE)

BERLIN (AP) — Cologne has called midfielder Birger Verstraete to account for an interview he gave in which he criticized the club for its handing of three positive cases of the coronavirus.

The Bundesliga side said Sunday that Verstraete had given a false impression about training safety measures at the club in an interview Saturday with Belgian TV station VTM. It said it was abiding by the league’s medical advice and that all players would be tested again before training can resume Monday.

In a statement on the club website, Verstraete said, “Instead of giving an interview out of emotion, I should have contacted our doctor and had my questions answered. It was not my intention to blame the responsible authorities or FC Cologne.”

Verstraete had told VTM in an interview Saturday that two players and a physiotherapist were confirmed with COVID-19 and that he was finding it hard to focus on soccer, especially as his girlfriend is at high risk due to a previous heart condition.

“I want everyone to be healthy before we play soccer again,” Verstraete said.

The players had been training in small groups, but that hadn’t eased Verstraete’s concerns.

“We train in two groups and you know that the boys were extremely close to me,” Verstraete told VTM. “The test was done on Thursday around 4 p.m. and before that we had been together constantly from 9 a.m. to 3 p.m. We did fitness work together, trained together. Thursday’s test didn’t show that I am positive and that is why there will be another test tomorrow.”

The three affected individuals were immediately ordered to quarantine for 14 days, but otherwise training was to continue as before.

Team doctor Paul Klein defended the club’s handling of the cases on Saturday, saying training with those who tested negative was still possible “due to the hygiene and infection prevention measures in group training” as no one had come into prolonged contact with those affected.

But Verstraete said the decision not to quarantine the whole squad “is a bit bizarre.”

Verstraete said the club was correct “in a literal sense. But the physiotherapist is the man who treated me and other players for weeks. And I paired up with one of the two players in the gym on Thursday. So to say we did not come into contact with them is not entirely correct.”

Players and staff around the Bundesliga began giving samples Thursday as part of an ongoing process targeting a return to full training, then to games later this month.

“It’s not up to me to decide what to do with the Bundesliga but I can say that my head is not on soccer. If you see how close (the virus) is,” Verstraete said. “The health of my family, girlfriend – everyone in fact – is paramount.”

On Sunday, Verstraete told Cologne’s website that his girlfriend “will head home to Belgium and stay there for the time being.”

Most teams have not commented on test results. Werder Bremen, Bayer Leverkusen, Eintracht Frankfurt, Hoffenheim Hertha Berlin and Union Berlin all reported negative results before another round of testing Sunday.

Second-division side Stuttgart reported an “inconclusive result” from a person, reportedly a player, who was separated from his colleagues and placed in quarantine for 14 days before another test on Monday.

On Thursday, Chancellor Angela Merkel and 16 state governors postponed a decision on whether the Bundesliga could resume without fans present until next Wednesday. She warned there was still a danger that COVID-19 infections could rise if containment measures were relaxed too soon.

German clubs had committed to finishing the season by the end of June.