Colombia court calls on Uribe to testify in massacre probe 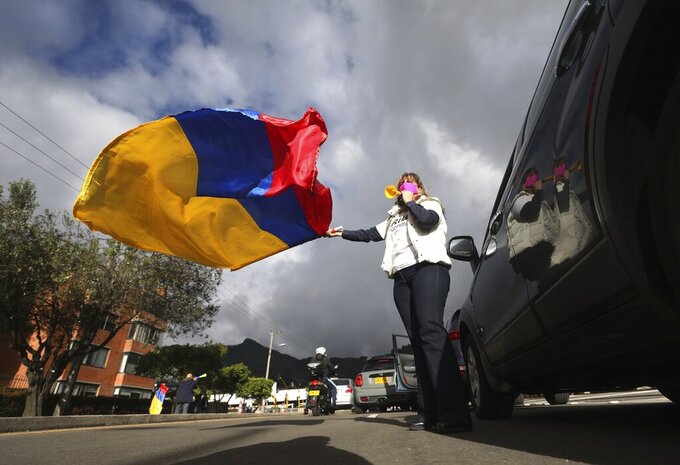 A supporter of former President Alvaro Uribe waving a national flag takes part in a caravan to protest the Supreme Court decision to place Uribe under house arrest while it advances a witness tampering investigation against him, in Bogota, Colombia, Friday, Aug. 7, 2020. (AP Photo/Fernando Vergara)

BOGOTA, Colombia (AP) — Colombia’s Supreme Court is calling on powerful former President Álvaro Uribe to testify in an investigation into three massacres that could once and for all establish whether he had any ties to violent paramilitary groups.

The new legal quandary for Uribe is potentially more damaging than a separate Supreme Court probe into possible witness tampering that sparked protests earlier this month after magistrates placed the ex-president on house arrest.

Details of the massacre inquiry are contained in a 71-page court document obtained by The Associated Press on Sunday and also published in local media in which magistrates examine whether Uribe had any connection to three mass killings in the Antioquia department as well as the death of a human rights activist during his time as governor.

Both cases strike at long-standing — but never legally proven — accusations that Uribe had a direct role in paramilitary groups, which were formed by landowners during Colombia’s long civil conflict to fight violent Marxist guerrillas.

Though the Supreme Court is still in an investigative stage, the inquiries have split open tensions in Colombia over the peace process that led to an accord with the country's biggest rebel movement. Uribe has vehemently denied the accusations and his lawyer is calling into question the timing of the new court request. Human rights activists, meanwhile, have praised the court for advancing the probes in a country where the powerful routinely escape accountability.

“For decades, there have been serious questions about Uribe’s possible role in atrocities,” said José Miguel Vivanco, Americas director of Human Rights Watch. “Colombia’s Supreme Court is bravely working to uncover the truth despite multiple attacks from the former president and his allies.”

In his decision, Magistrate César Reyes asks for Uribe and several ex-paramilitaries to appear before the court in September and requests a wide scope of documents containing previous court testimony, official records and personnel files aimed at clarifying the circumstances around three massacres.

The killings — in La Granja, El Aro, and San Roque — happened in the late 1990s at a time when leftist rebels were gaining a foothold in the Antioquia region, where Uribe launched his long political career. Paramilitary groups heightened their presence in response, the Inter-American Court of Human Rights has previously found.

In the most notorious of the three massacres, dozens of armed men tortured and assassinated at least 15 people in El Aro, about 135 miles (222 kilometers) north of Medellin, when Uribe was serving as governor of Antioquia. A large number of homes were set on fire, displacing numerous people, and hundreds of cattle were stolen.

Several ex-paramilitaries have previously testified that Uribe was one of the founding members of what became known as the “Metro Bloc.” In 2011, an ex-paramilitary alleged that one of Uribe’s properties was used as an operations headquarters. Another former combatant tied Uribe to the massacre in El Aro in 2015.

The inquiry also examines the death of Jesús María Valle Jaramillo, who was shot twice in the head in his Medellin office in 1998. The 53-year-old human rights activist had accused the army and high-ranking politicians of sponsoring death squads.

Reyes writes that the new request for information is based on the necessity of pushing forward previous probes to confirm any involvement in “criminal conspiracy, aggravated homicide, kidnapping, forced displacement.”

He also requests that several media outlets provide interview transcripts with ex-paramilitaries and asks to be provided with physical geographical studies of several properties, including the hacienda where Uribe is staying while under house arrest.

The case has been in the works for years, transferred from one court to another, and was at one point thrown out by the chief prosecutor’s office.

Uribe’s lawyer, Jaime Granados, questioned the timing, stating that his client has wanted to voluntarily testify for many years.

“This is unexplainable,” Granados said in a statement. “Since 2012 Uribe has been waiting to give his version and clarify these lies.”

The lawyer also said he was not alerted to the new filing until Wednesday, a day after Uribe resigned from the Senate.

The ex-president’s standing as a legislator is key, as under Colombian law only the Supreme Court can handle cases involving elected officials like Uribe.

Granados argues that the Supreme Court no longer has jurisdiction over Uribe’s cases and that the probes should be handed to Colombia’s chief prosecutor. Though several analysts believe the Supreme Court is likely to maintain authority over the case because the allegations concern events that took place while Uribe was in office, others contend it could be more a question of whether he used his role as a public official in carrying out any crimes.

The new filing also touches on former Colombian paramilitary leader Salvatore Mancuso, who is seeking deportation to Italy after serving a long drug sentence in the U.S. Colombia bungled an extradition request that had to be withdrawn last month and has mounted a last-minute campaign to ensure he is brought back.

Uribe deported Mancuso and 13 other warlords to the U.S. in 2008 in what his critics say was an attempt to quiet the men just as they began to reveal secrets about their crimes and politician collaborators, including the ex-president.

The Supreme Court is asking Caracol Radio for the complete interview it conducted with Mancuso from his jail cell in 2012.

Several of the ex-paramilitaries called to testify in the massacre probe are also considered key witnesses in the concurrent witness tampering investigation. The Supreme Court is analyzing whether Uribe had a role in trying to sway ex-paramilitaries into retracting previous declarations stating he had ties to their groups.

The allegations have rocked Colombia just as the nation enters the expected peak of the COVID-19 pandemic. Supporters have staged protests from their cars.

At the crux of the dispute are long simmering apprehensions about how to hold those responsible for human rights abuses during the long conflict accountable.

Uribe’s allies, including current President Iván Duque, contend it is inherently unjust for ex-guerrillas to be largely allowed to be free while testifying about kidnappings, murders and child recruitment during Latin America’s longest-running conflict while the former chief of state has been put under house arrest even while not yet charged.

The case — even without any actual charges — has increasingly morphed into a political dispute, with even U.S. Vice President Mike Pence weighing in. Civil rights groups worry the independence of the court could be jeopardized.

“The international community should have the court’s back and firmly protect its independence,” Vivanco said.