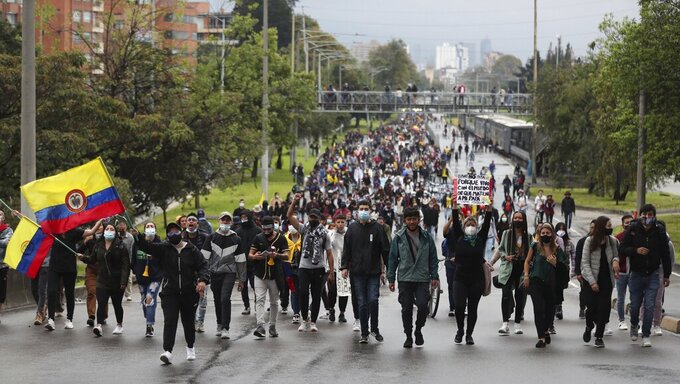 Alberto Carrasquilla’s resignation comes a day after President Iván Duque withdrew the tax plan from congress in response to the protests, which have included riots and violent clashes with police.

According to Colombia’s Human Rights Ombudsman, 16 protesters have been killed since Wednesday as well as a policeman who was stabbed to death.

Carrasquilla had designed the tax reform, which was aimed at raising $6.7 billion for Colombia’s government as it struggles to pay debts while attempting to provide poor families with subsidies to mitigate the pandemic’s impact.

The finance minister’s plan included a 19% sales tax on gasoline, as well as an effort to expand the country’s tax base by charging income taxes to people making $700 a month or more.

Carrasquilla had also proposed a 19% sales tax on utilities in middle-class neighborhoods, and a wealth tax for individuals with a net worth of $1.3 million or more.

The government said it needs the money to pay for healthcare improvements and to continue implementing a basic income scheme that started during the pandemic.

But the tax plan was rejected by most political parties – currently preparing for elections in 2021 – and also angered unions, student groups and small business leaders whose incomes have been affected by the pandemic. Protesters asked the government to raise corporate taxes and decrease military spending instead of taxing the middle class.

Sergio Guzmán, a political analyst in Bogota, said Carrasquilla’s resignation could “embolden” protesters to stay in the streets until the government meets other demands like police reform or stopping plans to fumigate illegal coca crops with a chemical that could cause cancer. He pointed out that Colombia’s president now has few options but to start negotiations over taxes with different political and social groups.

“The problem is that Duque has little credibility now,” Guzmán said.

Colombia's president on Sunday encouraged politicians to come together and design another tax plan.

“Withdrawing this tax reform or not is not what should be debated,” Duque said in a nationally televised speech. “The real debate is how to guarantee the continuation of social programs.”