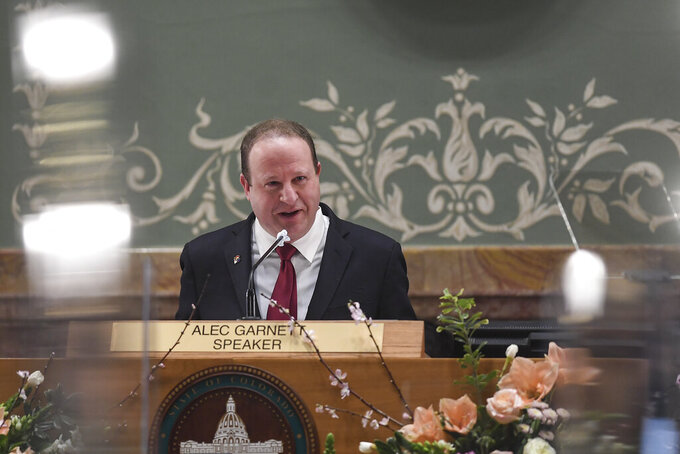 Gov. Jared Polis delivers his state of the state address in front of the House of Representatives at the Colorado State Capitol Building in Denver on Wednesday, Feb. 17, 2021. (AAron Ontiveroz/The Denver Post via AP, Pool)

DENVER (AP) — Colorado Gov. Jared Polis urged lawmakers Wednesday to take quick action on a $1 billion-plus stimulus plan, lower taxes to jump-start the economy and rally the state after a year that saw the coronavirus claim the lives of nearly 5,700 residents, three of the largest wildfires in state history and protests over police brutality and racial injustice.

Delivering his third State of the State address to a Legislature led by fellow Democrats, Polis again threw his weight behind an effort to create a state-administered health insurance option. The idea is to generate more competition in a market where many rural residents have few options, even with the state health insurance exchange created under the Affordable Care Act.

Polis insisted that lawmakers not only restore last year's drastic cuts to public education caused by pandemic-related revenue shortfalls but ensure that children can access universal preschool and kindergarten and that higher education is affordable.

“In short, this has been one of the most challenging years of our lives as Coloradans and as Americans,” he said.

All stood, heads bowed, when Polis called for a moment of silence for those who died of COVID-19. They also gave a standing ovation to health care workers who attended. The governor insisted Colorado is close to its goal of vaccinating 70% of residents 70 and older — and maybe more — by month's end. Seniors account for nearly 80% of virus deaths in the state, he said.

Polis traded elbow taps with a few lawmakers on his way to the podium before launching into a speech that insisted Colorado can emerge from the pandemic with a stronger economy, increasingly affordable health care and continued efforts to fight systemic social inequities. Democratic lawmakers are seeking to build on a comprehensive police accountability law, passed last year amid racial injustice protests, by restricting when officers can intervene in demonstrations.

Polis' proposed stimulus spending aims to create jobs in transportation infrastructure, broadband construction and other areas. Colorado’s unemployment rate surpassed 8% in January, with thousands of jobs lost in the hospitality and service industries during the pandemic.

The governor's agenda for the 2021 legislative session also includes continued incentives for renewable energy — a passion not readily shared by many Republicans. His administration has committed to making Colorado’s electricity grid run on renewable sources by 2040. He introduced that topic by addressing the catastrophic 2020 wildfires.

“How many homes and businesses must we lose before we resolve to meet the threat of climate change with the seriousness it demands?” Polis said.

Senate Minority Leader Chris Holbert welcomed a tax break for hard-hit small businesses, especially restaurants. But the Republican was skeptical of Polis' insistence on quickly transitioning to clean energy. Oil and gas employs tens of thousands of people in Colorado and injects billions of dollars into the state economy.

“I'm frustrated about energy independence sort of being in the rearview mirror,” Holbert said. “It sounds like the governor is intent in moving forward in eliminating clean natural gas.”

House Speaker Alec Garnett urged Republicans to join majority Democrats in fashioning solutions to transportation funding, an issue that long has dogged lawmakers. In the past, Democrats have resisted Republican demands that the state issue bonds to tackle a $9 billion construction backlog and focus new investment exclusively on roads and bridges.

“We need both parties to come together,” Garnett said.