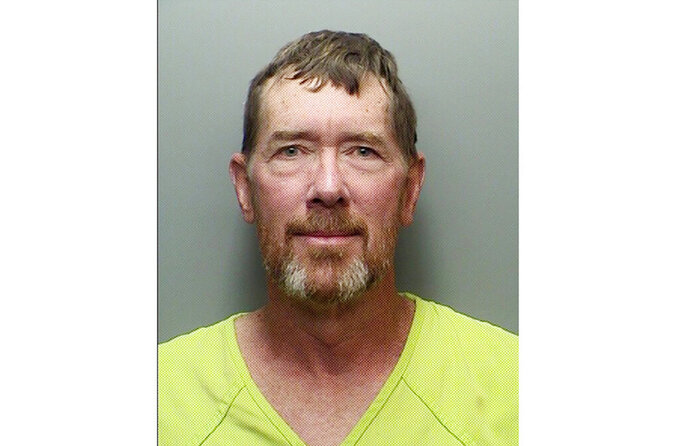 This undated booking photo released by Loveland Police Department shows Scott Gudmundsen. Authorities have arrested the Colorado man they say held at gunpoint two roofing-company employees knocking on doors in his neighborhood. Both were wearing blue polo shirts with a local roofing company logo when Gudmundsen forced them to the ground on Thursday, June 11, 2020, police told KUSA-TV. (Loveland Police Department via AP)

DENVER (AP) — Authorities have arrested a Colorado man they say held at gunpoint two roofing-company employees knocking on doors in his neighborhood.

Both were wearing blue polo shirts with a local roofing company logo when Scott Gudmundsen forced them to the ground on Thursday, police told KUSA-TV.

Gudmundsen, 65, was dressed in fatigues and armed with two pistols, one of which had been converted into a longer weapon that looked like a carbine rifle, authorities said.

Gudmundsen had called 911 saying he was going to confront two men wearing masks in his neighborhood in Loveland, police Lt. Bob Shaffer said. Gudmundsen said he believed they were antifa — shorthand for anti-fascists — which is an umbrella term describing far-left groups that resist neo-Nazis and white supremacists at demonstrations and other events.

The workers were wearing white surgical-style masks during the coronavirus pandemic as they visited the neighborhood following a recent hailstorm, Shaffer said.

Colorado State University officials said in a statement that one of the victims is a football player for the school and a person of color. The school described the perpetrator as white. The race of the second employee was not immediately released.

“They were pretty rattled – both of them were,” Shaffer said.

Police determined the workers were doing nothing wrong and arrested Gudmundsen on suspicion of felony menacing and false imprisonment. He is scheduled to appear in court June 18.

No attorney was listed for Gudmundsen in court records, but a man identifying himself as his son apologized on the family’s behalf and said Gudmundsen was undergoing treatment at a mental health facility.