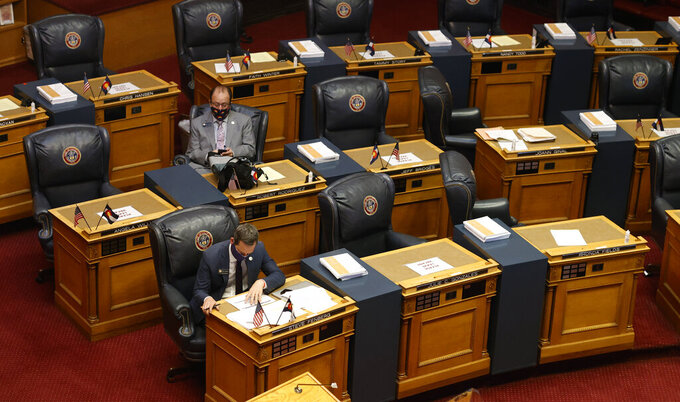 FILE - In this May 26, 2020, file photo, state Sen. Steve Fenberg, D-Boulder, front, and Sen. Robert Rodriguez, D-Denver, sit amid the empty desks before the chamber reopens in downtown Denver. Colorado's Democrat-led Legislature is plowing ahead on special session legislation to provide limited state relief to businesses, students, and others affected by the coronavirus pandemic. The Senate on Tuesday, Dec. 1, 2020, unanimously passed bills to direct $5 million to help residents to pay utility bills; $50 million to assist landlords and tenants; and $100 million to the governor's office for use in the public health emergency. (AP Photo/David Zalubowski, File)

DENVER (AP) — Colorado's Democrat-led Legislature plowed ahead Tuesday on special session legislation to provide limited state relief to businesses, students and others affected by the coronavirus pandemic, overcoming Republican objections to the scope of the aid and GOP attempts to limit the Democratic governor's ability to decree public health orders.

The Senate unanimously passed bills to direct $5 million to help residents to pay utility bills; $50 million to assist landlords and tenants; and $100 million to the governor's office for use in the public health emergency. The bills were immediately taken up by the House.

Democratic Gov. Jared Polis — who has tested positive for COVID-19 and is isolating — called the special session, saying the state could no longer wait for Congress to deliver a new federal relief package. Lawmakers convened on Monday and hope to wrap up business on Wednesday.

A top priority is sustaining Colorado's struggling small businesses, which have been hit by temporary closures, curfews and bans on indoor dining or severe limits on indoor capacity during the course of the pandemic. The Senate sent a $37 million small business relief bill to the House on Tuesday, but only after several Republicans objected to a clause that firms in municipalities both severely affected by the pandemic and that are abiding by state health orders are eligible for aid.

Others objected to taking nearly $2 million from the sum for state and local administrative costs in dispensing the aid.

Legislative fiscal analysts estimate that small firms in only 27 of Colorado’s 64 counties currently are eligible — or roughly 20,000 businesses. Northern Colorado’s Weld County, for one, has publicly stated it will not enforce state health restrictions designed to stem the virus’ spread.

Republican Sen. Jerry Sonnenberg, the lone “no” vote on the bill, said it unfairly penalizes private businesses, regardless of local government compliance with health orders. GOP Sen. Paul Lundeen said the bill’s proposed payments of up to $3,500 for firms that earned less than $500,000 in 2019 “is kind of like tipping money.”

Republican Sen. Bob Gardner took issue with the bill's administrative costs. “In a financial transaction, that would be regarded as highway robbery,” he said.

Under the bill, firms would have to apply to their local county or city government, which in turn will apply to the state. Payments of up to $7,000 would be allocated in February.

Democrats this week have voted down several Republican message bills that sought to limit Polis' emergency powers to issue health and other orders during the pandemic. Polis has repeatedly extended a state of emergency allowing him to issue those orders — long a sore point with Republicans.

One bill, introduced by Sen. Jerry Sonnenberg would set a 60-day limit for a state of disaster emergency declared by the governor and would require the legislature's approval to extend the order. Another bill from Gardner would subject emergency public health orders to undergo a rule-making process with public hearings in order to extend state-issued health measures past the current 120-day emergency rule limit.

In August, Colorado's Supreme Court declined to hear a lawsuit alleging that Polis violated the state Constitution's separation-of-powers provisions and stripped the Legislature of its lawmaking role by declaring a public emergency. The lawsuit was filed by Rep. Patrick Neville, then the House minority leader, and conservative activist Michelle Malkin.

The pandemic has killed more than 2,500 people in Colorado and infected more than 228,000, straining the state’s emergency hospital capacity.

The coronavirus causes mild or moderate symptoms for most people. But for some, especially older adults and people with existing health problems, it can cause more severe illness or death.