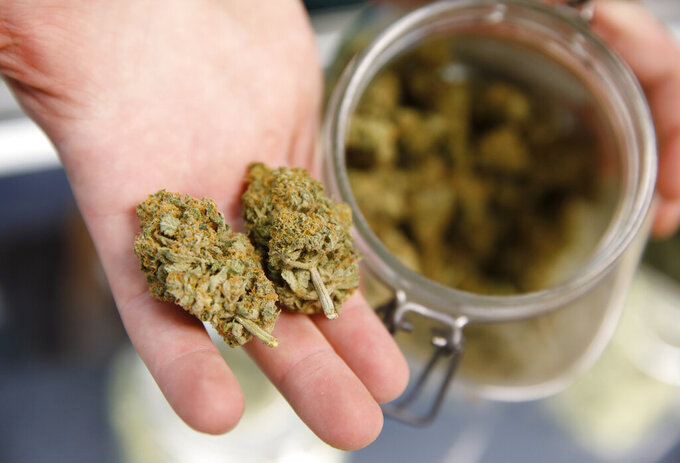 FILE - In this Nov. 27, 2015, file photo, a bud tender holds two marijuana buds on his fingers on the way to a customer at the Denver Kush Club in north Denver. A coalition that wants to ask Colorado voters to approve higher taxes on recreational marijuana to help children make up for learning losses during the pandemic and address tutoring and other special needs for low-income and disadvantaged children said Wednesday, June 16, 2021, it's been endorsed by former Democratic and Republican governors.(AP Photo/David Zalubowski, File)

DENVER (AP) — A coalition that wants to ask Colorado voters to approve higher taxes on recreational marijuana to help children make up for learning losses during the pandemic and address special needs for low-income and disadvantaged students said Wednesday it’s been endorsed by former Democratic and Republican governors.

Learning Opportunities for Colorado's Kids is circulating petitions in hopes of collecting nearly 250,000 voter signatures needed by Aug. 2 to place its initiative on the November ballot.

The campaign said former Democratic Gov. Bill Ritter, former Republican Gov. Bill Owens, state lawmakers from both parties and a host of educational and advocacy groups, many serving Black and Latino children, have endorsed the effort.

Initiative 25 would create a Colorado Learning Authority within the state education department to oversee out-of-school tutoring, English language instruction, special needs and disability instruction, mental health and career and technical training for children ages 5 to 17. It would generally help children from low-income families and those falling behind their grade levels by certifying tutors, who can be teachers doing the work outside regular hours.

Funds cannot be used for in-school expenses or private school tuition and would be distributed directly to tutors.

To pay for the program, backers want voters to approve a 5% excise tax increase on recreational marijuana by 2024 to generate more than $137 million a year. Recreational pot sales currently carry a 2.9% state sales tax and a 15% excise tax, with proceeds directed, in part, to school construction and maintenance.

The proposed tax increase would be phased in starting next year. The authority also would take some existing revenues from leases, rents and royalties paid for activities on state lands, and it could seek outside funding.

In April, Colorado consumers bought about $166.5 million worth of recreational cannabis. Excise tax revenue on those sales surpassed $25 million, according to the Department of Revenue.

The recreational marijuana industry is wary of the proposal, saying in part that continued cannabis tax increases could promote black market sales.

“This initiative helps level the playing field and lift up those for whom there are too few opportunities,” Papa Dia, executive director of the Aurora-based African Leadership Group, which serves the African immigrant community, said in a statement.

“With LEAP, we can narrow the opportunity gaps between the rich and poor, between students from homes where English is not the first or primary language spoken, and between those attending high-performing schools and those who do not,” Dia said.