Column: 11 states, 12 weeks and golf rolls on in a pandemic 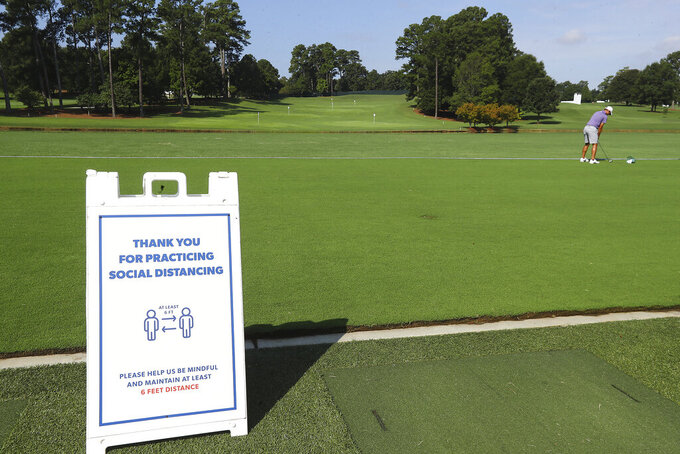 PGA Tour Commissioner Jay Monahan has saved nearly a dozen ribbons, an unusual set of keepsakes that are as much about caution as celebration.

At the end of every tournament he attends — all but one — Monahan clips off the vinyl cloth band on his left wrist that was required for him to be part of the bubble during golf's return from the coronavirus pandemic-caused shutdown.

The wristband represents another week in the books and another tournament on the horizon.

There were 139 tests for the coronavirus last week at the BMW Championship, all negative.

That was the fourth straight tournament without a positive test, the last one coming Aug. 1 at Lake Tahoe when Branden Grace got the wrong result at the wrong time, knocking him out of the PGA Championship the following week.

Since the return to competition at Colonial the week of June 8, 1,042 players and caddies have been tested at tournaments, for a total of 3,591 tests. There were seven positive tests for players, three for caddies. That doesn't include results from the PGA Tour Champions (four events) or the Korn Ferry Tour (12 events).

Nick Taylor was among the last to return, having gone home to Canada to be with his wife and newborn. He recalls some anxiety when he showed up at Muirfield Village in Ohio. As he headed home, he was surprised by the low number of cases.

“I was in our bubble back in Canada, where we had very few cases,” he said. "I knew I was going to be gone for at least six weeks. I felt it would be hard to have a big spread since we're outside so much, which is a low risk. The charter (plane) has helped a lot. But our bubble, people are coming in and out every week. ... What was the most we had in a week? Two or three?”

That was in the third week back, at the Travelers Championship in Connecticut, and that's when it looked as though this grand plan was about to collapse.

Cameron Champ tested positive, along with two caddies that led to three players — including Brooks Koepka and Graeme McDowell — to withdraw. Webb Simpson withdrew when a family member tested positive. By the end of the week, two more players had tested positive.

“The snowball is getting a little bigger,” McDowell said as he began the drive home from Connecticut to Florida. But amid strong feelings that golf was about to stop again, McDowell raised another important question.

What happens if golf shut down for one or two months? Then what?

“You come back and what's changed?” he said. “We have to get through to the other side of this.”

East Lake is not the end of the road by any means. Two majors were rescheduled, with the U.S. Open at Winged Foot in two weeks and the Masters in November (the British Open was canceled). Still to come is another trip to California, ones to Mississippi and Texas, two in Las Vegas and another just north of Los Angeles.

“The first week with no positive tests you're thinking, ‘This will be cake.’ And then tests popped up and the mob wants everything shut down,” Joel Dahmen said. “A couple of protocols were switched up and that helped. If you're tested weekly, you do the right things, we're going to be OK. We've proven that. I thought there would be a couple of cases a week. We're traveling. There's a lot of holes in our bubble. But everyone is doing a good job.

"I'm impressed we made it this long and this safe.”

Through it all, there has been no loss on sponsors (California-based Workday stepped in as a title sponsor for a replacement event in Ohio) and no reduction in prize money, all with no spectators. That model can't last. Players know that. So does the PGA Tour, which has lost some $100 million.

For a group of independent contractors, everyone seemed to be on board. There was a false sense of security with no positive tests the first week. There was overcrowding at Hilton Head, which felt like spring break at some restaurants.

There were eight conference calls with the 16-member Players Advisory Council, all with perfect attendance, a rarity. That includes Anirban Lahiri, home in Bangalore, on the phone at times in the middle of the night in India.

“What you're seeing is the professionalism on the PGA Tour, with the players and caddies, and their roles in how this has played out,” said Kevin Kisner, one of four players on the tour's policy board. “The most positive thing is how well the tour has done to let us play for the money we're playing for, to keep sponsors on board, and to keep us playing."

Next up is the Tour Championship, where the FedEx Cup bonus pool is just over $45.6 million for the 30 players, with $15 million going to the winner. Monahan will be there to present the trophy before he cuts another ribbon off his wrist.

And then it's on to California for the start of a new season.