Column: Age is a meaningless number for Indy's 4-time winner 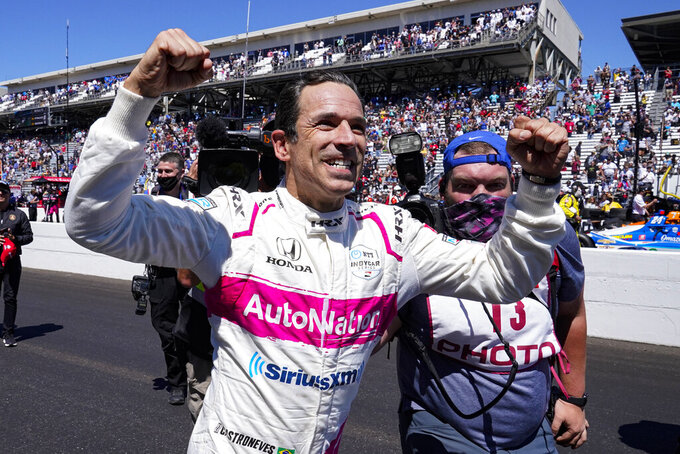 INDIANAPOLIS (AP) — Perhaps it was a little premature to run Helio Castroneves off so soon.

Age wasn't on his side, of course, and time was running out to join that elite club of four-time Indianapolis 500 winners.

But after a 46-year-old schools one of the hot young stars in the closing laps of the biggest race in the world, then climbs 16-feet up the Indianapolis Motor Speedway fence, well, maybe Castroneves deserves a second look.

“The performance numbers from Helio ... I didn’t quite get him not running anymore,” said team owner Michael Shank, who gave Castroneves a six-race ride this season that launched Sunday with the Indianapolis 500.

The deal with Meyer Shank Racing — in a leftover car bought from DragonSpeed Racing that Ben Hanley qualified 33rd in last year's Indy 500 — was an opportunity to get Castroneves back to the Indy 500. And it was all he had on his calendar besides the Rolex 24 at Daytona in January with Wayne Taylor Racing and Tony Stewart's six-race Superstar Racing Experience that begins next month.

Better than nothing, right?

“I keep looking for something else I love, something else I want to do,” Castroneves told The Associated Press on Monday. “I haven’t found anything yet. I want to race. I absolutely should be racing full time and my goal is to be full-time racing next season."

He proved that Sunday with a masterful drive at Indianapolis that put Castroneves into the exclusive club of four-time winners, which last welcomed a new member 30 years ago. The Brazilian won his third Indy 500 in 2009 and has tried for 12 years to join A.J. Foyt, Al Unser Sr. and Rick Mears as the only four-time winners.

But after two decades driving for Roger Penske, Castroneves had aged out of the organization and there really wasn't a place for him anymore. Shank threw him a lifeline that brought him back to Indy and made him the fourth-oldest winner in the 105-year history of the race.

Castroneves then had a wild celebration in front of the 135,000 spectators that made for the largest sporting event since the start of the pandemic.

He scaled his first fence as a 25-year-old first-time race winner so overcome by emotion that he'd forgotten race officials had warned drivers to knock off the celebratory antics. That fence climb at Belle Isle in 2000 drew a $6,000 fine from CART, but the crowd loved the “Spiderman” showmanship and Castroneves claimed the check he turned over was torn up on the spot.

He won two more races and climbed two more fences before he arrived at Indy for the first time in 2001, won the race, climbed that fence, too, and a star was born.

When last year's Indy 500 was held without spectators for the first time because of the pandemic, the mood was particularly dour. When Castroneves passed 24-year-old hotshot Alex Palou on Sunday with two laps remaining and the crowd erupted, the energy pushed him to the finish line and the adrenaline helped him scale new heights of the mesh and cable fencing.

As his career has been coming to some sort of close, Castroneves has kicked it into another gear. He won the first championship at the professional level last season when he captured the IMSA sports car title in his final season as a Penske driver.

Then he opened this year by winning his first Rolex watch in the prestigious sports car race. Since January, he's trained every day as if he's still a full-time IndyCar driver, even though there's been nothing on his schedule until Indianapolis this month.

Now, in two races so far this season, Castroneves has two wins including that elusive fourth Indy 500.

Castroneves “absolutely without a doubt” believes he should be running a full IndyCar season, but he has just five races with Shank remaining on his calendar, plus the six-race Superstar Racing Experience.

So that's why he climbed the fence more than once Sunday. And why he sprinted almost a mile along the frontstretch so that he could wave to the adoring crowd. During his nearly 20-minute victory lap in the back of a convertible, fans in the grandstands climbed the fence in their own homage to Spiderman.

His peers rushed onto the track to congratulate him, many of them Penske employees and former teammates. In victory lane, Roger Penske himself hugged his former driver.

Simon Pagenaud, his former teammate who finished third, marveled at the view he had as Castroneves toyed with runner-up Palou, who led for 35 laps in his second 500 and swapped the lead late with Castroneves.

“Alex was showing his game too early. Helio knew exactly where he could get him and all of a sudden you saw him, he jumped at his throat like a tiger,” Pagenaud said. "He’s got a feel for this place. The more you love the place, the more the place loves you back. There’s something really strange about it.

“All Helio thinks about is the 500. He knows when he’s going to be in the fight for the win. He keeps it to himself. He uses it as energy.”

Shank and team co-owner Jim Meyer both said they watched Castroneves execute “a chess match” for 500 miles while the rest of the field was racing as if it was a regular event.

Castroneves didn't dispute any of the assessments.

“I do have a lot of miles at this place,” he said, smiling.

Castroneves since 2009 has worn the ring he earned for his third Indy 500 victory because, he said, “my mentor Rick Mears said you wear the last one you won.”

On Monday, he sported the massive diamond-encrusted ring he received after the race but said it would join the three others in a safe and he'd wear a smaller replica once it arrives.

He's already thinking about starting a club of five-time winners — he'd be the only member — while he fights for the full-time job he believes he deserves next year.

Mears, still an adviser at Team Penske, said he was “so tickled” to have Castroneves in the four-time winners group and noted his path was slowed by three runner-up finishes. After a few days have passed and his emotions have settled, Mears said, it will be interesting to see how Castroneves views his new place in history.

“Just being in that group for myself, even though I had the same numbers they did, four wins, I still didn't feel I was at their level,” Mears said. “They were two of my heroes. So that was a very special thing for me. And I'm sure he feels very similar. But the other thing is I think this is going to be so good for our sport and so good for our industry. He's a great champion, so upbeat, and it's real and people love him.”