Column: Anniversary marks progress of pandemic, not the end 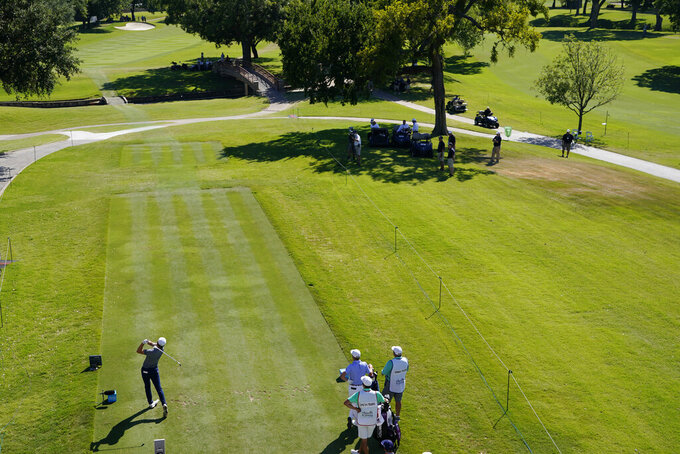 FILE - In this June 11, 2020 file photo, Jordan Spieth tees off on the 17th hole during the first round of the Charles Schwab Challenge golf tournament at the Colonial Country Club in Fort Worth, Texas. The PGA Tour went for most of nine months without fans and a year later is just now starting to get them back. (AP Photo/David J. Phillip, File)

PONTE VEDRA BEACH, Fla. (AP) — The backdrop was a navy blue board filled with 33 logos of The Players Championship. Sitting next to PGA Tour Commissioner Jay Monahan was the gold trophy as he spoke about scrapping the tour's premier event last year and how golf made it through the COVID-19 pandemic.

At least there wasn't a “Mission Accomplished” banner.

It's tempting to think that way. Monahan mentioned the phrase “light at the end of the tunnel” on three occasions during his news conference Tuesday, which typically is more of a “State of the Tour.” This was a state of the pandemic.

The tour has played 36 out of the 39 weeks since it returned, stopping only because of holidays, not an outbreak. It never had more than three players test positive for the coronavirus at any one tournament.

Memories are still fresh from last year. Players received a text late at night after the first round saying that The Players Championship was canceled and there would be no tournaments for at least a month (it turned into three months). Bernd Wiesberger caught the last flight home to Austria. Kevin Na found a banana in one of the pockets of his golf bag, which otherwise would not have been discovered for months.

Monahan remembers missing the opening tee shot for the first time since he joined the PGA Tour as executive director of The Players Championship. He had been in a boardroom at the TPC Sawgrass clubhouse with the rest of the executive staff for a meeting that lasted more than 12 hours and ended with the decision to stop playing.

“I will be there on Thursday. I look forward to it,” he said. "Just proud, most importantly, to be back here a year later — proud of our players, proud of all the caddies, everybody that has worked so hard to get us back to this point in time. And candidly, to do so in a really inspiring way.

“I think this is an important week for us every single year,” he said, “but particularly so this year.”

He won't be the only one watching. The Players Championship is allowing 20% of capacity for spectators, which will be somewhere short of 10,000 people (no one knows exactly what “capacity” means on a golf course). The tickets sold out one hour after they went on sale last month.

Instead of players sharing the $15 million purse like they did last year — a generous gesture by the tour for players who went an entire year without purses being cut — the winner gets $2.7 million.

Not quite, because golf isn't ready. No one is.

“It's funny, because a year into it you think, ‘OK, we hopefully will be done now.’ The vaccine is rolling out and there's light at the end of the tunnel,” Rory McIlroy said.

McIlroy read about Texas doing away with its mask mandate and he was OK with it, because part of him likes the idea of people having freedom to choose. But then he would walk into a bustling restaurant in Florida and pause.

“The idea is great and the idea you're comfortable with, but then when you actually start to live it, it's like, ‘Whoa, maybe this is a little too soon,” McIlroy said. “You are certainly going to have that coming back.”

And that's why Monahan, while pleased with how far golf has come, remains guarded.

“We've seen surges. We've seen the unpredictable, the uncertain nature of this pandemic and this virus,” Monahan said. “While we see light at the end of the tunnel and the progress we're making and the hope that's in front of us ... you still have to remind yourself that you've got to focus on your plan and your protocols and make sure we're doing everything we can to keep health and safety as our No. 1 priority."

The Arnold Palmer Invitational last week was the first of seven consecutive tournaments that are open to the general public at a reduced capacity. The target at Bay Hill was 5,000 and it felt twice as large. A majority, but certainly not everyone, was wearing masks.

Monahan doesn't know when golf or any sport can return to normal, or even when the light gets a little brighter.

Former Masters champion Danny Willett had to withdraw from The Players on Tuesday because of a positive coronavirus test. The tour had gone four tournaments over the last three weeks without one, its longest stretch since six weeks between positive tests last summer.

There is an anniversary this week, a reminder of when it all started. McIlroy is still the defending champion from his 2019 victory. He shot 72 in the first round last year and was already nine shots behind Hideki Matsuyama. Now they start over.

There is progress. There are fans.

But it's best to keep eyes on the road instead of the rearview mirror.