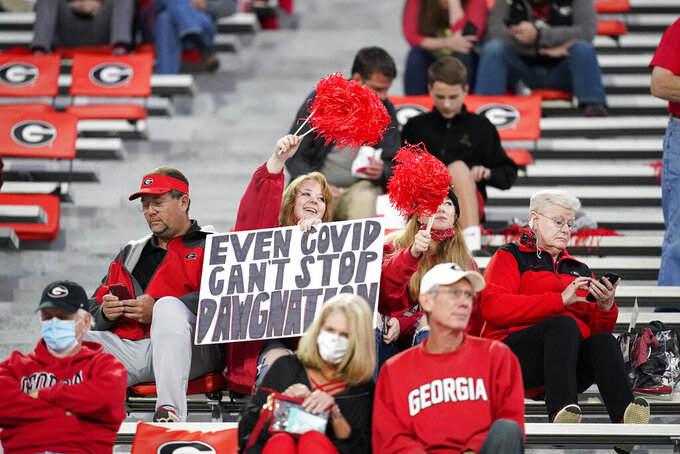 FILE - In this Oct. 3, 2020, file photo, a fan holds a sign "Even COVID can't stop Dawgmation" before an NCAA college football game, in Athens, Ga. Coaches wearing masks around their chins. Fans not wearing masks at all while cheering from their seats. One school deciding to drop the safety checks it was requiring for those entering the stadium to cut down on long lines. College football is sending plenty of alarming signals at it attempts to get through a tenuous season amid a pandemic. (AP Photo/Brynn Anderson, File)

C'mon, college football, you've got to do better.

Coaches must set an example by wearing their masks. Fans shouldn't be cheering from their seats or mugging for the cameras without face coverings. Schools must mandate safety checks for anyone entering the stadium.

That's the only way they're going to get through this most tenuous of seasons — somewhat safely, at least — in the midst of an unchecked pandemic that has already claimed more than 200,000 American lives.

The biggest game of this past weekend produced all sorts of disturbing images. Georgia, the third-ranked team in the country, requires fans to wear masks when they enter Sanford Stadium and while they're on the concourses, but they can take them off at their socially distanced seats.

So, naturally, hardly anyone was wearing a mask while watching a 27-6 victory over Auburn in the first top 10 matchup of the season.

Sure, Georgia was following Southeastern Conference guidelines, and school officials insisted that they maintained a safe environment for an outdoor event, but the message was not a good one.

Especially when Bulldogs coach Kirby Smart seemed to spend most of the evening with his mask dangling beneath his nose or down around his neck.

Smart acknowledged that he must do a better job with this most basic — and arguably, most important — of safety protocols, a simple step that tens of millions of Americans are following every day despite the inconvenience.

“Absolutely," Smart conceded. “I’ve been talked to by the commissioner and several others."

He held up a mask to drive home his mea culpa.

“I just have to figure out a way to get it tighter and more comfortable on there," he said. “The biggest thing is when you’re in the middle of coaching and talking to somebody, you have to get comfortable being able to leave it up and leave it on. And that’s probably the toughest thing.”

Then there's LSU, the reigning national champion and another SEC powerhouse.

We've already heard coach Ed Orgeron casually drop that most of his team already contracted the coronavirus, as though it was nothing more than the common cold.

On Monday, the Tigers doubled down by announcing they'll stop doing CDC-sanctioned wellness checks at stadium gates. Instead, they encouraged fans to do a self-assessment of their health before they leave the house.

LSU officials say they want to cut down on the long lines to get inside Tiger Stadium. For good measure, they also lifted a ban on alcohol sales, creating an even greater chance of irresponsible conduct from those in the stands.

Look at it this way: Since the fans won't have to wait as long to get inside, they'll be even more time for drinking.

Seriously, it's baffling that anyone in a position of authority pondered the options and thought this was the way to go — especially in a state that has one of the nation's highest COVID-19 death rates, roughly 1 in every 850 residents.

To its credit, the NFL has gotten serious about its safety protocols in the wake of games being postponed because of positive tests.

Commissioner Roger Goodell sent out a memo warning the league’s 32 teams of penalties including potential forfeits of games for any violations that force changes in the schedule.

The league already doled out hefty fines to three coaches — Denver’s Vic Fangio, San Francisco’s Kyle Shanahan and Seattle’s Pete Carroll — who thumbed their exposed noses at the league's mask mandate. They were hit with $100,000 fines, while their teams got docked $250,000.

The SEC and other conferences should consider similar measures for coaches who don't wear their masks, but don't hold your breath.

We reached out to the league Tuesday and all we got was “there's always room for improvement” before being pointed to an article in which Georgia officials said they were largely pleased with their safety measures for Saturday night's game.

Georgia and LSU are hardly the only schools worthy of scrutiny.

In a season-opening upset of the defending national champs, new Mississippi State coach Mike Leach was caught many times with his face uncovered. He blatantly violated league rules, and then cast doubt on whether masks were needed at all.

“I try to do my best with it, but once you’re 6 feet apart, I can’t help but wonder if some of this isn’t an homage to politicians,” Leach said, doing his best to send the most irresponsible message to his players.

Thankfully, there are coaches like Duke's David Cutcliffe, who understand the gravity of the situation.

Of course, it was always gong to be difficult to maintain a safe environment in a high-contact sport played in close quarters.

We've already seen positive tests, and we will surely see many more before the season is done.

But the goal must be to get through this without anyone suffering long-term health problems or, heaven forbid, dying.

“If our players are disciplined enough to do all that they’re doing to stay playing football, why would we not do the same?" Cutcliffe said. “It’s not easy to talk and call plays on the sidelines, a constant thing that’s in your mind. But you know what? Personal discipline is the best way we’re going to face anything in life and handle tragic circumstances or tough circumstances. So we’re just going to go with it."

C'mon, college football, you can do better.