Column: A different US Open than imagined at Torrey Pines 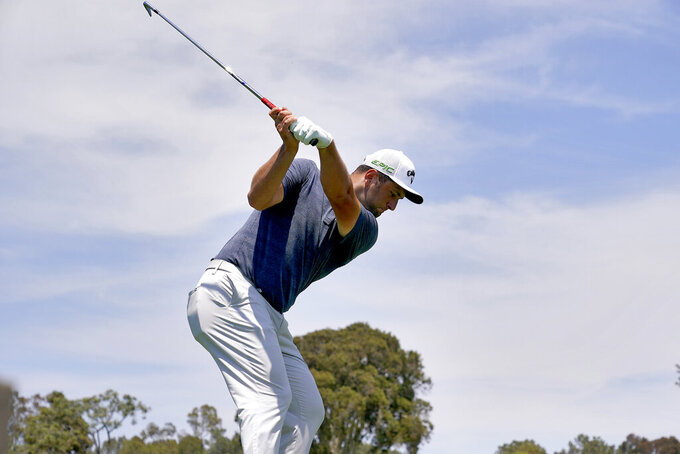 Jon Rahm, of Spain, plays his shot from the eighth tee during a practice round of the U.S. Open Golf Championship, Tuesday, June 15, 2021, at Torrey Pines Golf Course in San Diego. (AP Photo/Gregory Bull)

The spectacular ocean vistas will fill TV screens as usual, along with the obligatory shots of hang gliders prancing above the cliffs of Southern California. In an era where betting is the rage, there’s probably a bookie somewhere who will offer an over/under on the number of times fans at home will be treated to the replay of Tiger Woods rolling in a putt on the final hole to force a playoff at Torrey Pines in 2008.

Aside from that, this is not be the U.S. Open everyone expected just a few months ago. Not even close.

Woods is absent, of course, which changes the dynamic of the storyline probably more than it does the leaderboard. His epic win while playing on a broken leg 13 years ago captivated the country, with productivity plummeting as office workers spent most of a Monday tuned into his playoff with Rocco Mediate.

Thankfully, Woods is still alive after crashing his SUV while speeding on a California highway in February. If he does return to play competitive golf at some time — and that’s a big if — it will be a story even more remarkable than the one he fashioned the last time the Open was at Torrey Pines.

But Phil Mickelson is playing in his hometown, something that was in doubt before the USGA gave him a special exemption because, well, he’s Phil Mickelson. Turns out Lefty didn’t need it, after becoming the first 50-year-old to win a major when he shocked everyone in golf by taking the PGA Championship last month on Kiawah Island.

Strange things can happen in golf, and if further evidence is needed there’s two bulked up guys — including the defending champion — engaged in a feud that may not quite fit in the buttoned up sport but is a lot of fun to watch. Brooks Koepka and Bryson DeChambeau insist they’re only trying to grow the game but there’s bad blood between the two that would be fascinating to watch if they happen to be paired together on Sunday with the Open title at stake.

“I hope on the weekend we can play against each other and compete,’” DeChambeau said. “I think it would be fun and would be great for the game.”

Even stranger might be the return of Jon Rahm, who was last seen being escorted off the 18th green at Memorial after building a six-shot lead through three rounds. Rahm’s tournament came to an abrupt end when he tested positive for Covid-19, likely costing himself a tournament win and $1.7 million in prize money.

Not only is Rahm back, but bookies have made him the tournament favorite at 9-1 odds. Even better, he says he’s now fully vaccinated, meaning there will be no repeat of his exit in Ohio.

“I got it all. I had it, I got the antibodies, got the vaccination,” Rahm said. “I feel invincible at this point.”

That’s a good feeling to have even if you’re not the No. 3-ranked player in the world. Rahm is, and he has history at Torrey Pines, winning the Farmers Insurance tournament in 2017 for his first PGA Tour victory.

And if he can shoot a 64 while playing with Covid like he did in the third round of Memorial earlier this month, who knows what’s possible in the Open. Rahm certainly had time to think about it as he isolated himself in Arizona after his positive test and missing his parents seeing his young son for the first time.

``It was really easy when you’re laying in your bed to go back and forth, what could be in the future, what could have been in the past,’’ Rahm said ``A lot of meditation and mindful reading and trying to stay in the present, and within the weird part of saying this is trying to understand what that experience was for and trying to learn from it.’’

Still, for a lot of fans in San Diego this tournament is all about one man. Mickelson is not only a hometown favorite but showed he can still compete at the highest level by becoming the oldest player to ever win a major in the PGA Championship.

If Mickelson’s win at the PGA was a huge feel-good story, imagine what would happen if he finally won an Open after finishing second six times — and did it on a course he grew up playing. It’s improbable, for sure, but so was the way he dominated on the weekend at Kiawah Island against players half his age.

“It’s a unique opportunity because I’ve never won a U.S. Open. It’s in my backyard. I have a chance to prepare properly, and I wanted to put in the right work,” Mickelson said. “So I’ve kind of shut off all the noise. I’ve shut off my phone. I’ve shut off a lot of the other stuff to where I can kind of focus in on this week and really give it my best chance to try to play my best.”

It’s golf, of course, so that best chance doesn’t even mean Mickelson will make it to the weekend. But Lefty is always must-see TV, even when he’s crashing and burning.

This Open is shaping up to be a must see, too, hang gliders and all.