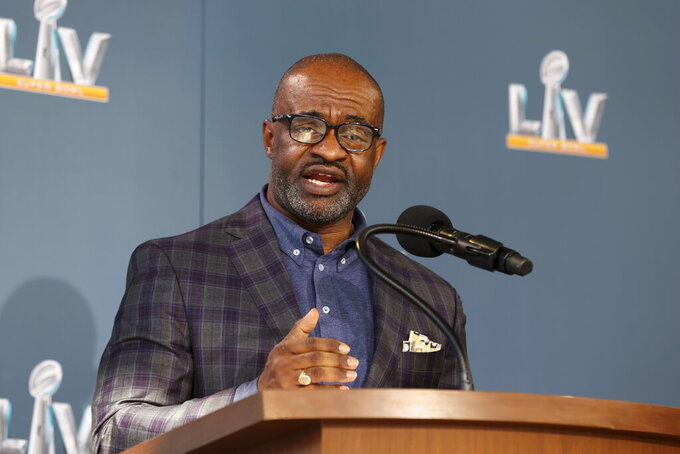 The victory lap Roger Goodell took from the podium Thursday in Tampa Bay was hardly unexpected — and surely not unwarranted. He and the NFL have a lot to crow about on the eve of the Super Bowl, and the commissioner’s annual State of the NFL appearance was as good a time as any to talk about what went right in a season where a whole lot more could have gone wrong.

What was surprising was that Goodell was joined in the celebration by the union chief whose job it usually is to fight against him at every level.

Imagine that, a lovefest between union and management breaking out just days before the big game. Surely that wasn’t on anyone’s bingo card a year ago.

But if politics can make strange bedfellows, so, too, can a pandemic. And if Goodell and union leader DeMaurice Smith wanted to get warm and fuzzy for a few minutes, well, that was on them.

“We have worked together to find solutions and work past our differences,” Goodell said. “We’ve had out dustups in the past. But this season it really took all of us to get through this.”

The message is something other leagues can learn from, particularly baseball, where union-labor relations are so poisonous that they threaten the health of the sport itself.

That it took a deadly pandemic and the prospect of a lost season to get them to join hands and work together was left unsaid. The mere fact a Super Bowl will be played Sunday meant pats on the back for everyone involved, from medical workers administering COVID-19 tests to the players themselves.

“This was an extraordinary collective effort. There are so many people who had to work together to get this done,” Goodell said. “There were doubters, obviously there were people who didn’t think we could do it. We had doubts ourselves.”

Those doubts came with good reason, even if the NFL had the luxury of having a few months to watch — and learn from — what other leagues were doing. Indeed, just attempting to play a season of full-contact football without a bubble seemed ludicrous when plans were first formulated last summer.

Actually playing every game of that season and making it all the way to a Super Bowl on time? That bordered on impossible, until the NFL and its players managed to do just that.

They not only got through a season, but did it at a high level of play. The reward isn’t just playing the Super Bowl, but playing it with Tom Brady and Patrick Mahomes in a quarterback matchup that couldn’t have been scripted any better if Goodell and Smith went behind closed doors to map it out.

“I know we have learned to work in a very difficult environment, and we will do it again,” Goodell said. “That is one of the things we learned ... hearing clubs and the NFLPA saying our relationship has never been stronger. I interpret that as a trust that has been built here that will take us forward and will be the long-lasting legacy of this season.”

If so, perhaps more than one victory lap is in order. The two sides wrapped up a 10-year CBA just as the pandemic was hitting, and the promise of fewer labor battles over the next decade is one that fans can cheer. There’s so much money flowing into the league that reasonable people should be able to figure out how to divvy it up fairly.

And if they can overcome a pandemic together, they should also be able to figure out solutions to other issues. That includes coaching diversity and the shadow ban of Colin Kaepernick, both of which were addressed by Goodell only in broad strokes.

But Goodell was quick to point out 1.2 million people attended games this year despite the pandemic — and did it without any known outbreaks. He noted that 70% of the league’s games were decided by eight points or less, and that the level of play was as good — maybe even better — than ever.

About the only mistake Goodell made was to refer to the Washington Football Team by its former name — something he quickly corrected.

He also had trouble predicting the future, though he was hardly alone.

Tim Dahlberg is a national sports columnist for The Associated Press. Write to him at tdahlberg@ap.org or https://twitter.com/timdahlberg