Column: Left out of Masters a time to appreciate a good year 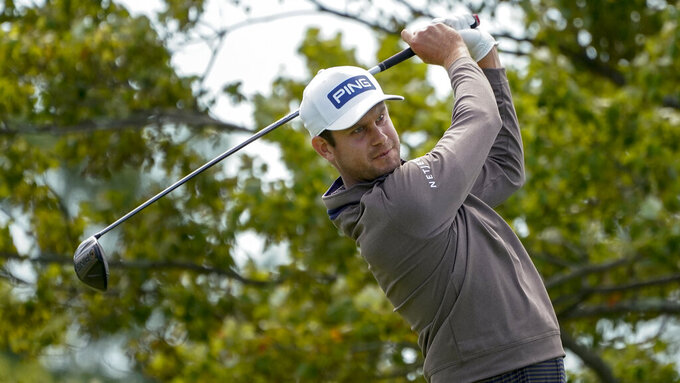 FILE - In this Sept. 20, 2020, file photo, Harris English, of the United States, plays his shot from the second tee during the final round of the US Open Golf Championship in Mamaroneck, N.Y. English has met three criteria for the Masters, but not until next year. (AP Photo/Charles Krupa, File)

It's rare to have a player in the top 40 missing from the Masters, much less four of them.

Rarer still is to show up at Augusta National and notice who's missing.

That element won't change, especially with so much anticipation from waiting 18 months to hear: “Fore, please. Tiger Woods now driving." And with so much intrigue about chasing a green jacket two weeks before Thanksgiving.

The chase will not include Daniel Berger, the No. 13 player in the world.

Berger received more attention from being left off the November invitation list than if he had been playing in the Masters. It became a bigger story than necessary because he was holding out hope that his three months of great play this summer, including a victory at Colonial, might count toward a major that was supposed to be held in the spring.

With the Masters a week away, Berger has company among players in the top 40.

Viktor Hovland, a former U.S. Amateur champion from Norway, won the Puerto Rico Open and has relied on solid, steady golf to reach No. 24 in the world. Ryan Palmer is having a resurgent year with five top-10 finishes and two close calls. He is No. 33, his best world ranking in five years.

Not to be overlooked is Harris English, who was No. 373 in the world and had only conditional status when the previous season began. He had four top 10s in five events, never lost his touch after the three-month shutdown due to the coronavirus pandemic and played his way into the Tour Championship. And then he was fourth in the U.S. Open. Now he is up to No. 35 in the world.

All of them will be watching a Masters without spectators, without blooms, without roars and without them.

It couldn't be any other way.

This is the 2020 Masters, and it was meant to be played April 9-12 with a field of 96 players who began qualifying a week after Woods won his fifth green jacket. C.T. Pan won the RBC Heritage at Hilton Head to qualify for his first Masters. He will have waited 571 days to hear his name announced. Pan now is No. 169 in the world.

Would it have hurt to add one player?

Yes, if the player in question was Berger, because five other players since have won PGA Tour events that qualify them next year. And with limited daylight, Augusta National already is going to a two-tee start and still might not beat darkness.

Augusta National avoided what could have been messy with Collin Morikawa. He was just outside the top 50 when he tied for ninth in the Arnold Palmer Invitational, moving into the top 50. A week later, the pandemic shut down golf, and the Masters used that March 17 world ranking to fill out the field.

Imagine if Morikawa had been a fraction of a point outside the top 50, and then won the PGA Championship at Harding Park. Is he in the Masters? The club never had to consider that scenario.

Even with the smallest field and the toughest qualifying criteria, the Masters gets the right field.

There was outrage in some media corners in 2012 when Ernie Els didn't qualify and wasn't extended a special invitation. Those typically are reserved for international players who don't have regular access to the PGA Tour. Els had his chances. He wound up winning the British Open that summer, and he had a Masters invitation for the following five years.

This is not a time for Berger, Hovland, Palmer and English to wonder what they're missing, because they were never part of the 2020 Masters. This is the time for them to celebrate what they've achieved to at least be part of the conversation, and to look forward to the next Masters. They earned it.

All four are guaranteed spots at Augusta National next April by reaching the Tour Championship, no small feat for any of them. Berger and English were out of the top 125 the previous season. Hovland was a PGA Tour rookie. Palmer's game never seems far off, though he had gone six years since he last played in the Tour Championship.

Now they're in the top 40, and not likely to lose much ground with only two tournaments left this year after the Masters.

They can expect that cream-colored invitation in the mail from Augusta National in December. They will start next year at Kapalua on Maui. And they can make plans for a Masters that is only five months away.

There might be spectators then among the blazing blooms and Georgia pines. And their names will be called in an introduction not heard anywhere else.