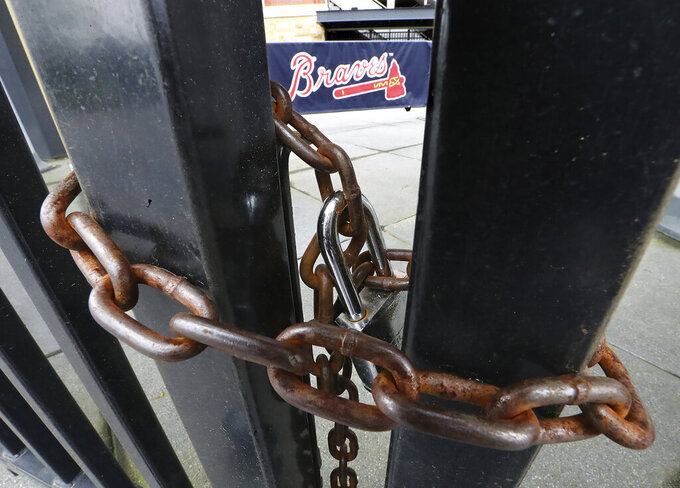 FILE - In this March 31, 2020, file photo, the third base gate to Truist Park, home of baseball's Atlanta Braves, is chained shut in Atlanta. A year after the worldwide coronavirus pandemic stopped all the games in their tracks, the aftershocks are still being felt across every sector. (Curtis Compton/Atlanta Journal-Constitution via AP, File)

The transformation of the sports world began unassumingly enough, while Adam Silver sat in a car outside his New York City apartment making phone calls. With only an inkling of what loomed on the horizon and just one player with a positive test for COVID-19, the commissioner pulled the plug on the NBA season. Soon enough, the lights went out on games around the globe.

By the time sports returned, the roar of the crowd was replaced by canned noise, and fans morphed into cardboard cutouts. Masks were everywhere, even if many on the sidelines and in dugouts never figured out how to wear them.

Viewing schedules had to be rejiggered and sports betting exploded. Anyone who bought stock in DraftKings the morning after Silver’s edict is probably driving a Tesla today. Nothing was the same. Many things won’t ever be — even with the arrival of vaccines.

AP sports columnists Jim Litke and Tim Dahlberg weigh in on the highlights and lowlights of a year in sports few will forget and none want to repeat.

JL: Besides Silver? … Marcus Rashford. The 23-year-old Manchester United star almost single-handedly shamed the British government into extending free school meals for more than a million kids. Then he reached into his own pocket to set up a task force that enlisted some of the UK’s biggest food brands to help. Queen Elizabeth made him an MBE (Member of the British Empire) in October. A knighthood can’t be far behind.

TD: Not sure who Marcus Rashford is, but if the queen likes him that’s good enough for me. Scratch my Justin Turner nomination.

JL: Yes. For a solid month of Sundays with not much else on, we watched him watch old videos of himself scorching one rival after another. Then he’d put down his iPad and cackle, “and I took that personally.” Michael Jordan is exactly who we thought he was.

TD: Can’t say … because I didn’t watch it. Korean baseball — or maybe it was Russian ping pong? — was on TV at the same time and I had money riding on both. Did I miss anything? Did he even mention Scottie Pippen?

JL: Roger Goodell headlines the NFL Draft from the basement/rec room of his home in New York. What’s great about that? Name another location in North America — even another bunker — where Goodell doesn’t get booed at least once. I’ll wait.

TD: There are none. Zoom is an awful excuse for actually talking to people. But if there were, I’d agree, just because of the sweater. Cuddly Goodell is the best Goodell.

JL: When Bryson DeChambeau resurfaced on tour as the Incredible Hulk. He’d already packed on 20 solid pounds since leaving college in 2015. Then he stacked another 20 pounds of muscle on top of that … during the PGA Tour’s three-month hiatus! DeChambeau can play, but that flat cap isn’t doing him any favors. From the neck up, he looks like an anvil.

TD: Andy Reid’s face shield fogging up opening night of the NFL season. Looked like he was smoking something funny inside. Reid got the last laugh, though, because the Chiefs made the Super Bowl and now the shield is in the Pro Football Hall of Fame.

5.) SPORT WHERE ATHLETES WERE LEAST IMPACTED:

JL: NASCAR. Let’s see: Drivers wear helmets, there’s no side windows and they’re roaring along at 200 mph. Pretty sure even when the track is packed, the fans sound like the engine and look like a tarp.

TD: Bass fishing. One person, one boat. Plenty of fish.

6.) SPORT WHERE ATHLETES WERE MOST IMPACTED:

JL: Any team with a coach. They’re supposed to yell in practice so they don’t have to during the game. But the empty gyms and stadiums proved irresistible to that dozen or so coaches who love the sound of their own voice. If you found it aggravating looking in on TV, imagine how the players felt.

TD: Wrestling. The 6-foot distancing thing was always a deal breaker, and wrestlers complained the masks made them too heavy.

7.) WHAT ONE THING DID YOU MISS MOST?

8.) WHAT CHANGE IN THEIR ROUTINES DO YOU THINK WILL BECOME PERMANENT?

JL: Players’ requests will be more closely … scrutinized. They’ve been breaking curfew forever, but attempts to limit their contacts because of COVID-19 required a whole new level of creativity. Clippers guard Lou Williams got permission to leave the NBA “bubble” for a weekend to attend his grandfather’s funeral and was later photographed at Magic City, a well-known Atlanta strip club. Williams claimed he was there just to pick up an order of wings. That defense didn’t fly (though Magic City is also known for its wings). Williams served 10 days in quarantine.

TD: Not signing autographs. Guys always hated it, now they’ve got an excuse not to pull out the Sharpie. A lot of them don’t like the media, either, and my guess is the days of reporters roaming locker rooms before and after games are over.

9.) WHERE DID ALL THE NEW SPORTS BETTORS PUT THEIR MONEY?

TD: Where didn’t they might be a better question. When’s the last time you saw a game that didn’t have a betting line attached to it? Some people would wager on the sun coming up, assuming you gave them odds. The biggest prop bet at the Super Bowl this year was the coin toss. That said, I’m not sure how much credit the pandemic gets for the spike, and how much of it has to do with how easy it is to get down a bet. However, I did learn one thing: Always bet the over in Korean baseball.

10.) WHAT SPORTS ACTIVITY ARE YOU MOST LOOKING FORWARD TO RESUMING?

JL: I’ll probably regret this, but the Olympics. Great cities have always made for great Olympics and Tokyo did the last time around.