Column: No-hitter a reminder of what we might have missed 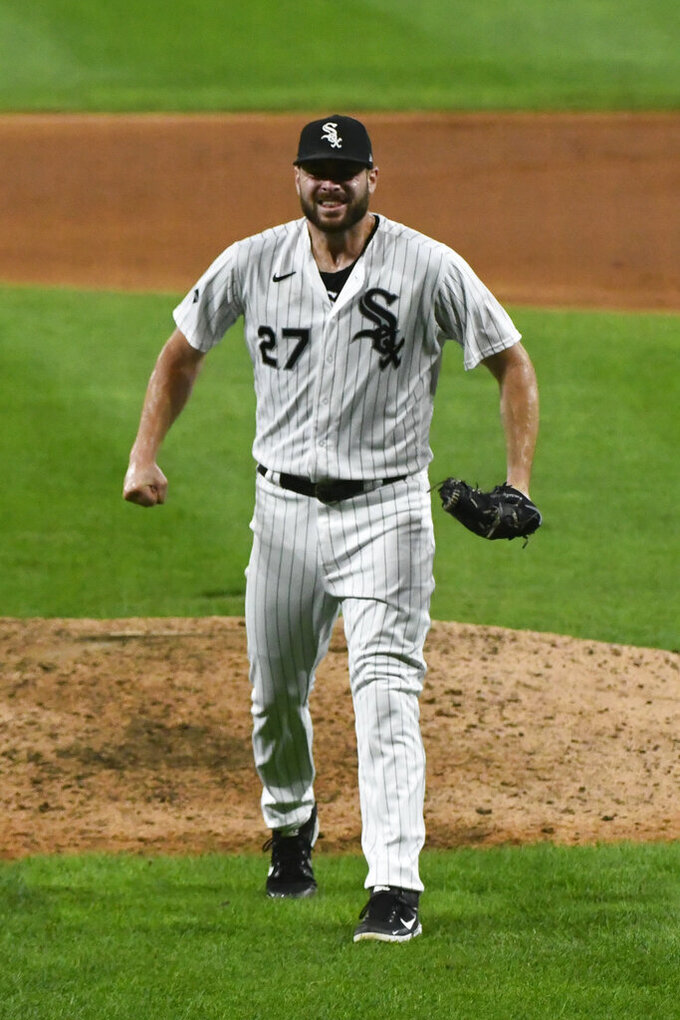 Chicago White Sox starting pitcher Lucas Giolito (27) reacts after closing out a no hitter at the end of a baseball game against the Pittsburgh Pirates, Tuesday, Aug. 25, 2020, in Chicago. (AP Photo/Matt Marton)

Midway through a season most of us will eventually try to forget, Lucas Giolito reminded us why so many wanted baseball back to begin with.

His no-hitter Tuesday night in Chicago was certainly the quietest of the 19 pitched in White Sox history. The cardboard cutouts on hand to witness a slice of history probably didn’t even bother to save their ticket stubs.

But in a season where accomplishments are hard to measure, Giolito served up one that fits easily into the record books. The first no-hitter of the pandemic era looked a lot like any no-hitter, complete with a celebration on the mound afterward that didn’t exactly follow virus protocol.

Turns out baseball really is just baseball, even with seven-inning doubleheaders, playoffs for almost everyone and ill-fitting masks everywhere.

“2020 has been a very strange year,” Giolito said through his own mask afterward. “Obviously a lot of weird stuff going on with COVID and the state of the world, so may as well throw this in the mix.”

It was just one night, and the fake crowd noises were noticeable to anyone tuning in on TV. The opposition wasn’t great, either, even though the Pittsburgh Pirates were coming off a three-game sweep of Milwaukee that almost doubled their win total for the year.

But the beauty of Giolito’s no-no was that it was as legitimate as any thrown in a normal season. And for the first time this year, baseball got the kind of moment that it seemed the weirdest season ever would never deliver.

That Giolito is now on pace to win just six games this year wasn't brought up, at least for a moment. Neither was the fact that he’s not only the sole pitcher in the American League with a no-hitter this year, but the only one with a complete game shutout.

He’s now among the favorites in Las Vegas to win the American League Cy Young award, assuming they still plan to give one out.

Nothing about this season is normal, of course, which makes it difficult to sort out most accomplishments. No one will hit 50 home runs or drive in 100 runs, and there will be no 20-game winners. Everything is supposed to be multiplied by a factor of 2.7 to arrive at full-season stats, but few fans have the patience to pull up calculators on their phones and run numbers every time a player does something that looks statistically interesting.

It’s hard to even figure out the standings, with some teams playing far fewer games than others because of COVID-19 postponements.

A no-hitter? Well, that’s something we all understand.

And the best part is it didn’t happen in a seven-inning game, which would have sent baseball purists in a frantic search for asterisks to attach to the feat.

Giolito pitched the kind of no-hitter that dominant pitchers of the past would have been proud of. He faced the minimum 27 batters, walking just one while striking out 13. He needed just 101 pitches and threw 74 of them for strikes.

There was a bit of drama at the end, when a sinking line drive by Erik Gonzalez was snagged by right fielder Adam Engel at knee height. The cardboard cutouts didn’t give Giolito a standing ovation, but his teammates swarmed over to him and it seemed almost natural for those watching on TV.

“They turned up the (automated) crowd noise. I noticed that,” Giolito said. “The crowd noise was getting louder and louder as the game went on. That was fun. At the end of the day, it would have been great to pull that off with fans in the stands and be able to kind of look out there after it was all done and see how excited they were. I’m sure a lot of White Sox fans were excited from their homes watching it on TV.”

For Giolito, it was affirmation that he can be an elite major league pitcher, something he wasn’t so sure of after a miserable 2018 season, when he gave up a league-leading 118 earned runs for the White Sox. A highly touted prospect, the 26-year-old said he had to learn from failure to reach the pinnacle of success.

But he never gave up, and he persevered through the tough times. Giolito said he could see this day coming, even if the day didn’t quite look the same as he thought.

“I always envisioned that I’d throw a no-hitter in the big leagues,” he said.

A no-hitter that couldn’t have come at a better time for Giolito — and baseball, too.