Column: Players shouldn't get too comfortable with no fans 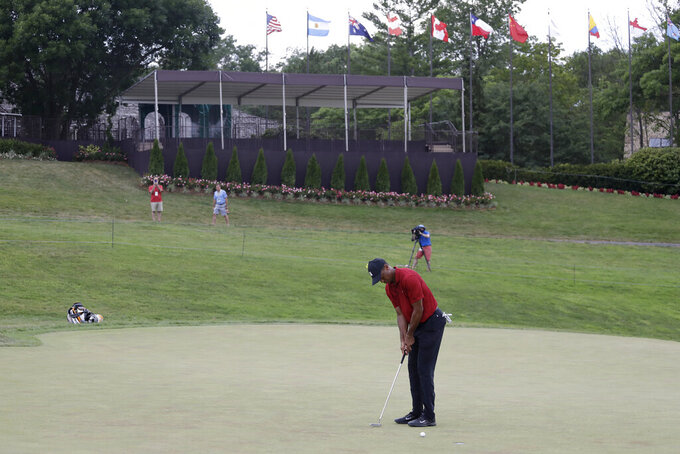 Tiger Woods putts on the 18th green during the final round of the Memorial golf tournament, Sunday, July 19, 2020, in Dublin, Ohio. (AP Photo/Darron Cummings)

DUBLIN, Ohio (AP) — Tiger Woods made his 19th trip to Muirfield Village as a pro and it was unlike anything he remembered.

“I hadn't taken these lines,” he said.

That typically refers to shots off the tee. He was talking about the direction he was walking.

There was no need to go from the range to the side of the clubhouse, into the locker room, down the stairs and out a side door to get to the putting green. With no fans around, it was a straight shot.

On the course, he could cut corners — with his legs more than with his driver.

“Like for instance, it was nice walking off the 16th green going straight to the tee instead of walking around,” he said. “Its certainly different around here with some of the walks. You get from point A to point B very directly. I hadn't felt this ever here. Usually I'm meandering roundabout."

What hasn't changed is the prize money.

They played for a $9.3 million purse at the Memorial. Ryan Palmer made just over $1 million for his runner-up finish, the biggest paycheck of his career, including his 2010 Sony Open victory.

Next week, the prize fund is $10.5 million for a World Golf Championship.

That's worth remembering before players start getting comfortable with not having spectators.

Tournaments and the PGA Tour are having to cut costs and tap into rainy day funds so they can keep going without a key source of revenue.

Players have not competed for nearly $80 million in prize money because of cancellations, including a World Golf Championship and the British Open. But they're playing, and that's a good thing.

Zach Johnson is among those stunned that only seven players have tested positive for the coronavirus, the most recent Grayson Murray before he left for this week's 3M Open in Minnesota.

“We would love to have them back,” Johnson said of the fans. “But if it's responsible and smart not have to have them, we probably should play without them. Our product is better with fans. The impact of not playing far outweighs in a negative way the positives of playing. Completely shutting down should not be an option if we can play.”

Players talk about missing the volume, the energy, without fans. The silence was never more deafening than when Justin Thomas made a 50-foot birdie putt in a playoff at Muirfield Village, and Collin Morikawa matched him from 25 feet.

During the Workday Charity Open, Rahm chipped in from rough left of the 14th green — a spot made famous by Woods chipping in for par when he won the Memorial in 1999. Rahm looked around at nobody and said amid the quiet, “Just like when Tiger did it.” Then he walked to the 15th tee because the grandstand behind the green was no longer there.

It's not just the cheers. No spectators means no pro-ams. It's no corporate hospitality, either local or national, both significant. No ticket sales. No concessions. No merchandise. That's revenue.

And the show goes on.

The PGA Tour is among other sports at the professional and college level that have reduced salaries for employees during the COVID-19 pandemic. Contracts are in place, sure, but golf hasn't had a reduction in purses.

“Not yet,” Kevin Streelman said with a wary smile. “We need the pro-ams. We need ticket sales. We need charitable dollars. Those are all significant implications. We're fortunate to play for what we do, to keep the circus going. But it's probably not sustainable in this situation."

The Memorial was supposed to be the first tournament with fans. Tournament director Dan Sullivan submitted a plan for a reduced capacity that the state enthusiastically approved. Other sports in Ohio were eager to see how it worked.

And then it was scrapped as coronavirus cases began to spike, another decision that made health and safety the priority, which can't be faulted. But it was hard not to see the financial hit to the Memorial. Structures already had been built — the Nicklaus Club next to the 14th green, a concession area behind the 16th tee, a small grandstand overlooking the 18th.

It led to an awkward exchange before the tournament when Jack Nicklaus was asked about the difficult decision his team made to not have fans.

“We didn't make it. The tour made the decision,” Nicklaus said.

Nicklaus then eased off blaming the tour and suggested players had objections, especially with pro-ams, even with testing for everyone involved.

“They're trying to make a living,” Nicklaus said. “And that makes it very difficult for them. In this particular time and what’s going on, I don’t blame them for wanting to make sure that they can stay safe and stay in a bit of a bubble and make sure that the whole world gets to watch good, quality championship golf.”

How soon is anyone's guess.

The U.S. Open on Sept. 17-20 at Winged Foot in New York is the next possibility. Domestically for the PGA Tour, it would be Oct. 1-4 at the Sanderson Farms Championship in Mississippi. Its executive director, Steve Jent, was at the Memorial, hopeful to see how fans would work. Instead, he saw a lot of empty space and vacant tents.

Monahan said the tour is doing everything it can to have fans by the back end of the year, even if it's limited. Golf has to start somewhere. It can't go from zero to the Waste Management Phoenix Open, the rowdiest event in golf.

And it can't sustain this model of players having the course to themselves for very long.

Players miss the excitement fans create. More telling will be how they feel about missing their level of income.