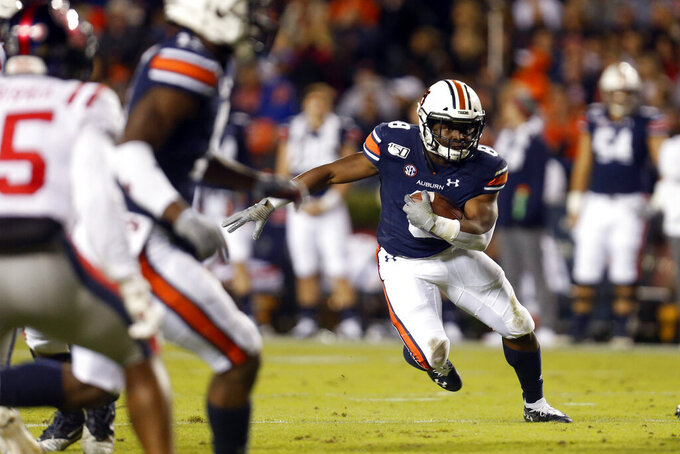 FILE - In this Nov. 2, 2019, file photo, Auburn running back Shaun Shivers (8) carries the ball during the first half of an NCAA college football game against Mississippi in Auburn, Ala. The Auburn Tigers once seemed virtual locks to have at least one 1,000-yard rusher every season. (AP Photo/Butch Dill, File)

Let's start with a confession: It feels downright reckless to be lobbying for more college football games while we're in the middle of a pandemic that has claimed more than 200,000 American lives.

Especially on the same day we learned that not even the White House is immune to the coronavirus.

Frankly, we're on record as favoring a postponement of the season at least until after the first of the year, so this is not our preferred option by any means.

But since college football is determined to carry on, even with players testing positive on an almost daily basis and games being postponed each week, we might as well figure out a way to crown a legitimate national champion at end of this chaotic season.

This much is clear: The four-team playoff must be expanded.

Naturally, the powers-that-be nixed that very idea on Wednesday, turning down a proposal by Pac-12 Commissioner Larry Scott.

"To do it now, it’s such a significant change with so many challenges, especially with the season started, they thought it was best to not make a change,” said Bill Hancock, executive director of the College Football Playoff.

We've come to expect that sort of backward-looking vision from those in charge of the sport — hey, did we mention that they're playing college football in the middle of a pandemic? — but there's still plenty of time to reconsider.

The current system always seemed a bit clunky anyway: a four-team playoff when there are FIVE major conferences (it's right there in the name, Power Five). But it has no chance of being fair this season, when the big boys are playing a varying number of games, starting the season at different times, and aren't playing any games against each other.

The Southeastern Conference, Big Ten and Pac-12 are playing zero games outside of their leagues. The Atlantic Coast Conference and Big 12 are allowing their members to play one non-league game apiece.

Good luck trying to make a fair comparison, though the Big 12 certainly hurt its case with three losses to Sun Belt schools the opening week of the season. The league's reputation took another blow last Saturday when longtime kingpin Oklahoma was stunned by Kansas State, leaving only three unbeaten teams at even this early stage of the season.

But what if one of them — Texas, Oklahoma State or Baylor — makes it through with an unbeaten record? Should they still be left out of the playoff?

Certainly, the uniqueness of the season ought to be pushing the College Football Playoff to double the number of teams to eight, which would mean a guaranteed berth for each Power Five champion.

The rest of the field would have to be subjective (one spot for the highest-rated team from the second-tier Group of Five conferences, along with two wild-card berths), but that's better than the total crapshoot of, say, trying to determine if two teams from the mighty SEC deserve to be part of a four-team field when the league has not played anyone beyond its 14 member schools.

Under an expanded playoff, the four quarterfinals games could be played on New Year's Day at campus stadiums of the four highest-seeded teams. Starting at noon and running throughout the day, what a bonanza that would be for college football fans

The Rose Bowl and Sugar Bowl, this season's two semifinal games, would be pushed back from New Year's Day to a bookend around the opening weekend of the NFL playoffs. One could be played on Friday night, Jan. 8, the other on Monday night, Jan. 11.

The national championship game at Miami's Hard Rock Stadium would also have to be moved back a week to Monday night, Jan. 18.

Stanford coach David Shaw said it's only a matter of time before the playoff gets more teams.

“Whether it’s six or eight, at some point in time it's going to happen,” he told reporters this week. "It's the only thing that makes sense."

Shaw is a long-time critic of the current system, which ensures that at least one major conference champion is left out every year. During the 2017 season, two league champions were snubbed after the selection committee went with a pair of SEC schools, Alabama and Georgia (The committee wasn't wrong, it turned out, as those two schools advanced to the national championship game).

Still, this seems an opportune time to try out an expanded format, while stressing that it's only a one-year experiment with no guarantee of being carried forward to the 2021 season.

Chances are, everyone would like what they see and make it permanent.

“The only thing that should matter is: Did you fight really, really hard your entire season to win your conference?" Shaw said. “If you did, you should get a ticket to the dance.”

American Athletic Conference Commissioner Mike Aresco, who has supported playoff expansion in the past, said it's just not feasible this season.

“The logistical problems are pretty significant,” he said.

In a year like no other, we've already seen most leagues and organizations making it up as they go.

The NBA Finals are being played in October. The NHL playoffs were conducted through the heat of summer. Major League Baseball hastily expanded its playoff field from 10 to 16. The Indianapolis 500 was run in August instead of Memorial Day weekend. The Kentucky Derby was bumped from the first Saturday in May to Labor Day weekend. The Masters has been transformed from a rite of spring to a harbinger of winter.

In light of those momentous changes, surely college football can add a handful of games and make some slight adjustments to its bowl schedule.

If they're going to press forward in a pandemic, they might as well have a worthy champion.