Column: Sports has reason to be proud, but can't be one-off 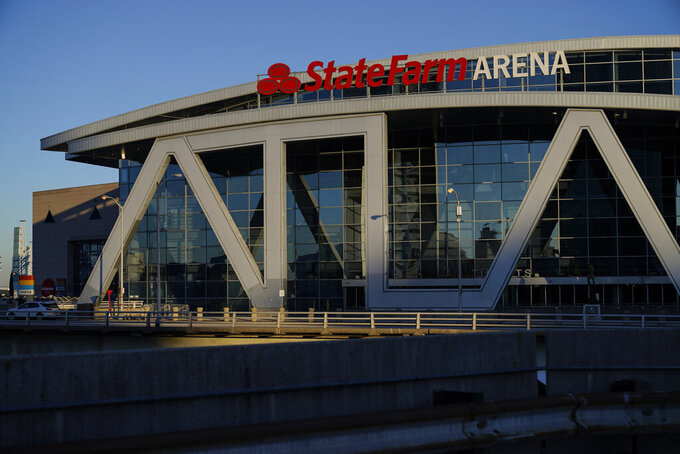 The State Farm Arena is seen in Fulton County where ballots will continue being counted in Atlanta on Wednesday, Nov. 4, 2020, after a delay on Election Day. (AP Photo/Brynn Anderson)

ATLANTA (AP) — Sports has every reason to be proud.

From teams that transformed their arenas into massive voting centers to college athletes getting a day off to cast ballots, there was an unprecedented level of civic engagement that undoubtedly played an influential role in our dramatic national election.

Making sure it's not a one-off.

So many athletes, coaches and team executives were eager to get involved in the political process when a rancorous presidential campaign fell in a year marked by racial upheaval, a deadly pandemic and economic strife.

Let's see if they're able to maintain that passion when the midterm elections roll around two years from now. Even more significantly, will they channel some of that energy toward those barely noticed local races, which often have a much greater impact on a person's day-to-day life?

“You've got to step up and do what you can to make a difference,” said Nell Fortner, the women's basketball coach at Georgia Tech. “What hit me so hard is we've got to vote.”

When all the votes are counted, this election may have drawn the largest share of turnout since the early 1900s, something in the range of 65%.

That's a laudable achievement, and everyone who played a role in it should take a bow. Even so, more than a third of the eligible electorate didn't bother to take part, which means there's so much work still to do. And don't even get us started on the pitiful participation rates when there's no presidential race at the top of the ticket.

College coaches have a huge role to play. Instead of just discussing Xs and Os, they need to instill the importance of going to the polls in our newest voters, those who long been the most disengaged members of the electorate.

The younger they are when casting that first vote, the more likely they are to become lasting participants in our political system.

“It's about voting for change, whatever that is for you,” Fortner said. “This has been a big teaching moment for me. We've tried to teach our young players about that, from the freshmen to the seniors. I'm proud of that. It's not all about basketball when you're the head coach at a college. We need to teach our young people about a lot of things.”

That is especially important when so many school systems have significantly reduced the amount of time they spend teaching social studies, civics and history — courses that long served as the bedrocks for understanding how the machinations of government work.

Far too many Americans have little insight into our political system, which has only served to stifle any sense of urgency to get involved.

We saw encouraging signs of change.

Basketball Hall of Famer Shaquille O’Neal had never voted until this year, but his involvement in several voting rights initiatives inspired him to cast an absentee ballot.

“I voted for the first time, and it feels good,” the 48-year-old revealed on his podcast.

O'Neal conceded that he didn't really understand the Electoral College system that is used to determine who wins a presidential election.

That's OK. He's surely not alone in that respect.

Then there's Adrian Clayborn, a 10-year NFL veteran who plays for the Cleveland Brown. The 32-year-old defensive end had not even registered to vote until this year.

“I always used the excuse that I don’t trust politicians, but that can’t be an excuse anymore,” he wrote on Twitter.

Across America, many large arenas — shuttered during the pandemic — were transformed into early and same-day voting centers, which helped reduce the excruciating wait times and provided plenty of room for social distancing.

State Farm Arena in Atlanta, normally the home of the NBA Hawks, was an early voting center for Fulton County. About 40,000 people took advantage of the opportunity to cast their ballots — a significant number in a state where the presidential race will apparently be decided by just a few thousand votes.

Many of these sports initiatives need to remain part of our electoral process, even when life returns to some degree of normal after the pandemic.

That includes the NCAA's mandate to give all athletes Election Day off — no matter that it falls during the heart of football season. In fact, it should be expanded to include the midterm elections beginning in 2022.

Ignore short-sighted coaches such as Florida's Dan Mullen, who grumbled that a day off would needlessly disrupt preparations for a big game and somehow endanger his players' health.

“It throws you completely off your game-week routine, which obviously to me is very dangerous because you’re out for the health of the kids, the buildup of the game,” Mullen said in a nonsensical stream of consciousness.

Mullen was in the minority this time around, but he may not be in the years to come.

The biggest challenge — something sports and all successful social movements have in common — is to keep that momentum going.

And not just every four years.