Column: With sports on hold, athletes take up new pursuits 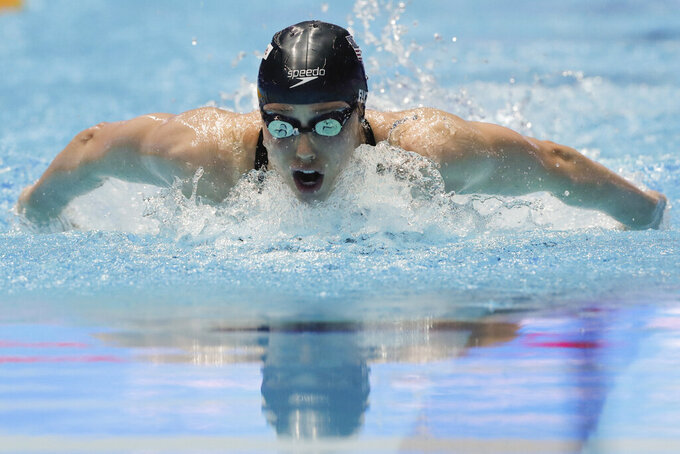 FILE - In this July 24, 2019, file photo, Hali Flickinger swims in the women's 200m butterfly semifinal at the World Swimming Championships in Gwangju, South Korea. With sports still largely on hold because of the coronavirus outbreak, some athletes and coaches have taken advantage of the unexpected free time to try new things, or maybe brush up on an old hobby. For Olympic swimmer Hali Flickinger, it's gardening and home renovations. (AP Photo/Lee Jin-man, File)

With sports still largely on hold because of the coronavirus pandemic, athletes and coaches have been looking for ways to pass all that unexpected free time.

We’ve heard plenty of familiar pursuits. Binge-watching a television series. Hunkering down with video games. Play time with the kids.

Some have gotten more creative.

Olympic swimmer Hali Flickinger has taken up gardening and home renovations. Detroit Lions coach Matt Patricia is strumming his ukulele. Atlanta Falcons lineman Jake Mathews hopes to get as proficient on the grill as he is at protecting Matt Ryan.

“When I’m full-time into swimming, I’m not going outside to plant a plant,” Flickinger, who competed at the 2016 Rio Games and hopes to make it to Tokyo next summer, said with a chuckle. “This is such a great opportunity to do those things we wouldn’t normally be able to do."

Flickinger, a 25-year-old Pennsylvania native who now lives and trains in sweltering Arizona, sulked on the sofa for a couple of days after the entire nation essentially locked down in an attempt to contain the virus, which has claimed more than 70,000 American lives and a quarter-million around the world.

Then, she decided to start living again.

Flickinger and her husband began with the outdoors.

“I’m learning how to garden,” Flickinger said proudly in a telephone interview. “I’m planting plants. I’ve never planted a plant in my life, but we’ve done that.”

There have been a few hiccups along the way, of course.

“We started out with these things called, well, I think they’re called oleanders,” Flickinger said. “But we found out they’re really poisonous. So we dug those up and replanted a bunch of palm trees. They are little baby ones, but hopefully they’ll grow to be big.”

Flickinger and her spouse then turned their attention indoors.

“We’ve remodeled a bathroom,” she continued. “Out here in Arizona, they have these textured walls. I had never seen them before, but they’re super popular here. Well, I wanted my walls to be flat. So we learned how to level out the walls. We also took down the old mirror and old medicine cabinet so we could put up a new medicine cabinet. We repainted the whole thing.”

How did the young couple suddenly acquire all this useful household knowledge?

“YouTube has been very helpful for us,” Flickinger replied.

Patricia, heading into his third season as the Lions coach, normally adheres to the lessons learned in Bill Belichick’s advanced class, “Tight-Lipped 101: Making Sure You Never Divulge Anything The Least Bit Interesting To The Media.”

That’s what made it so surprising when he revealed during a recent video session with Detroit-area reporters that he dabbles with the small, four-stringed guitar of Hawaiian descent.

“I can’t say I don’t have things that I always like to try to mess around with here,” Patricia said, suddenly turning to grab his musical instrument. “There, I don’t know if you can see it, but that’s a ukulele. So, there you go. I gave you a little tidbit.”

Of course, it didn't take long for that Belichick training to kick in again. When asked it he could regale everyone with a tune, Patricia clammed up.

“I may call them songs,” he quipped. “You would call them noise.”

Mathews, who has spent the past six seasons as Ryan's primary protector at left tackle, was hunkering down at his offseason home in Texas.

While the Falcons have been holding remote meetings almost every day and urging their players to stay in condition through a regular workout plan, Mathews still found time to dig out a forgotten gift from his quarterback.

“After the 2017 season, Matt Ryan got all the linemen a Big Green Egg,” Mathews recalled. “I put it together and had all these great ambitions to do stuff and become a master smoker, but I have not touched it since then."

Strange, coming from a guy who checks in at more than 300 pounds.

Now, at least, he's putting it to good use.

“Oh man, I've done some salmon and a few steaks," Mathews said proudly, while also stirring a few hunger pangs. "I may venture into some chicken soon.”

Who knows? After his playing days are done, he might nab a show on Food Network.

“One of my favorite things I've started cooking is sea bass,” Jarrett said. “I never had cooked that before, but once I learned to cook it the right way, it was great.”

He also bought a Peloton stationary bike, which brings up some intriguing ideas for an advertising campaign.

Instead of that sexist, dystopian commercial the company rolled out ahead of Christmas, we'd much rather watch the 290-pound Jarrett pedaling away on his high-tech bike, perhaps joined by 285-pound teammate Allen Bailey.

“Me and Allen are friends on there,” Jarrett said. “We do a class together and compete against each other.”

Jarrett has only one complaint.

“That seat is a little uncomfortable,” he said. “I've got to find me a cushion or something.”

Taking on an even more daunting challenge is Yetur Gross-Matos, the Carolina Panthers' second-round draft pick. He has apparently managed to find a pool, giving him a chance to rectify a missing part of his childhood, one that is often unavailable to kids of color.

“I'm trying to learn how to swim,” the rookie said in a Twitter post. “I never learned how to swim growing up.”

With Major League Baseball still trying to work out a plan to begin its season, Baltimore Orioles outfielder Dwight Smith Jr. has been dabbling with a former hobby.

“I kind of did it in the past,” Smith said. “I actually had a laptop that I would make mixes on, but I got a virus on it and kind of stopped. So now that I’ve got more time to sit down and relax, I might pick it back up and just go back where I left off at.”

A complete gutting of the master bathroom.

“I'm a little of an amateur,” she said, a tinge of doubt creeping into her voice. “But I hope to get better with each project.”

She's got plenty of time to learn.

The Olympics are still more than 14 months away.

Paul Newberry is a sports columnist for The Associated Press. Write to him at pnewberry(at)ap.org, follow him on Twitter at https://twitter.com/pnewberry1963 and find his work at https://apnews.com

AP Sports Writers Larry Lage in Detroit, David Ginsburg in Baltimore and Steve Reed in Charlotte contributed to this column.