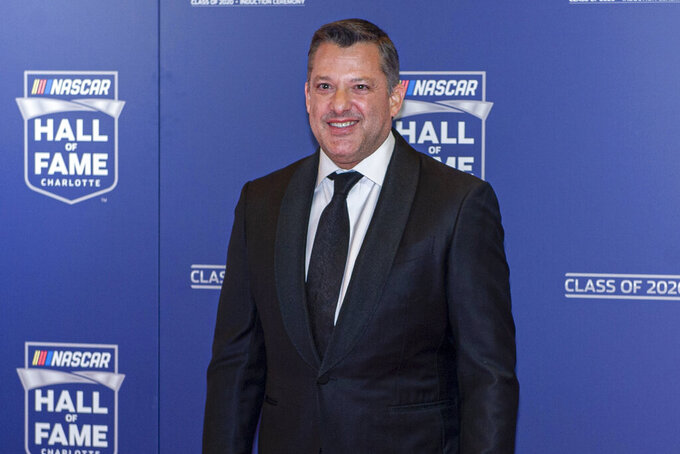 FILE - NASCAR Hall of Fame inductee Tony Stewart poses for pictures prior to the induction ceremony in Charlotte, N.C., in this Friday, Jan. 31, 2020, file photo. Tony Stewart wants to set the record straight about two misconstrued recent business decisions. Fans have been critical of Stewart since the Truck Series was dropped from Eldora Speedway and because he didn't sign Kyle Larson to his NASCAR team. Stewart is adamant that he tried to sign Larson but couldn't get partner approval on the driver suspended for using a racial slur. And he insists he dropped NASCAR after he felt slighted that Bristol Motor Speedway was given a Cup race on dirt. (AP Photo/Mike McCarn, File)

CHARLOTTE, N.C. (AP) — Tony Stewart is angry — what else is new? — and wants the record set straight regarding recent business decisions.

He also is in love — wait, who? Smoke? — and five months away from his 50th birthday finds himself happier in his personal life than ever before.

But even as he's settled into a blissful routine with drag racer Leah Pruett, a relationship that began early in the pandemic when Stewart's hectic schedule was suddenly wiped clean, he can't overlook the criticism being lobbed his way.

It was him, he insists, not NASCAR, who didn't renew the Truck Series race at Eldora Speedway. And he tried to sign Kyle Larson to Stewart-Haas Racing but couldn't get partner approval on the NASCAR driver suspended for most of 2020 for using a racial slur.

Stewart understands being rebuffed on signing Larson, even though that slammed the brakes on Stewart's attempt to help a friend resurrect his career while adding a top NASCAR talent to SHR's four-car organization. Companies make tough business decisions and Larson, since signed by Hendrick Motorsports, still has to redeem himself to corporations that pay the racing bills.

But the Truck Series debacle is one Stewart can't let go. He's heard too many people say it was NASCAR that left Eldora, the Ohio dirt track Stewart owns, after an eight-year partnership. It was Stewart's group that got a dirt track placed on the NASCAR national schedule, invested in capital improvements at the facility and built one of the most popular events on the Truck Series schedule.

In an interview with The Associated Press, Stewart said his goal had always been to use the Truck Series event as proof that Xfinity and Cup can race on dirt and should race at Eldora. But two days before NASCAR released the Cup schedule in September, Stewart received a tip that Bristol Motor Speedway was going to transform its facility into a dirt track for its first 2021 Cup race.

“I felt like I'd been mule-kicked in the gut,” Stewart told the AP.

Incensed that not a single NASCAR executive had given him a heads-up, he immediately told his staff to tear up the sanctioning agreement he'd yet to sign for the 2021 Truck Series race.

A short dialogue with NASCAR finally began, and Stewart took the weekend to calm down. His staff looked at the numbers and, even though the trucks were profitable for the track, the race ranked only fourth on Eldora's events — while requiring double the effort and sweat equity.

When he reconvened with NASCAR after a few days to think, Stewart said he was direct.

“I asked if Eldora was under consideration for an Xfinity or Cup race in the future, and I was told not at this time,” Stewart said. “So I said we were done.”

Some believe NASCAR pulled the race from Eldora or that NASCAR moved the Truck Race to Knoxville Raceway to spite Stewart, but he's adamant neither is true.

“This was entirely our decision and people need to understand. I am extremely frustrated as a track owner that there was zero communication from NASCAR,” he said. “Nobody ever had any conversation with me about Eldora or Cup on dirt until the deal with Bristol was about to be announced.”

He added he was also ignored when he inquired about his eligibility for next month's exhibition Busch Clash on the road course at Daytona International Speedway. Stewart said he absolutely wanted to run the race, but no one at NASCAR followed up with the three-time Cup champion.

Stewart, feted as a first-ballot inductee into the NASCAR Hall of Fame last January in one of the final industry-wide events before the pandemic, now feels snubbed by the series he's been devoted to for more than two decades.

He has plenty on his plate, though, and has become the T-shirt and jeans version of Roger Penske with his motorsports portfolio. He's got a full 2021 schedule of sprint car races that starts this weekend, full ownership of Eldora and partial ownership of Paducah (Ky.) International Raceway and Macon (Ill.) Speedway. Stewart also owns a World of Outlaws team and is the series owner of both the All Star Circuit of Champions and a grassroots racing series he renamed the All Star Circuit of Champions TQ Midgets.

This year will also mark a new venture with Hall of Fame crew chief Ray Evernham on the Superstar Racing Experience aimed at attracting all-stars no longer competing full-time. The six-race, short-track series will air on Saturday nights on CBS, with Stewart competing alongside Helio Castroneves, Tony Kanaan, Bobby Labonte, Mark Webber and other big names from various disciplines.

He scoffs at a false narrative spreading that Eldora was punished by NASCAR for Stewart's SRX involvement — “If people are worried about Ray Evernham, me and six races, they've got bigger things to worry about,” he said — and notes that SRX is racing at both Eldora and Knoxville, the lone dirt track on the Truck Series schedule.

All his business dealings, and next month's start of SHR's NASCAR season, have Stewart spread very thin when he's trying to prioritize someone else in his life for the first time. He and Pruett were introduced in 2019 via FaceTime by drag racing legend Don Prudhomme. They didn't meet in person until they wound up at the same motorsports event appearance, and their first date was the week before the pandemic shut down the country in March.

With nowhere to be for the first time in his life as a racer, Stewart accepted Pruett's invitation to spend four days with friends at Lake Havasu in Arizona. He stayed for four months, dragged her to short tracks across Oklahoma and Texas when his racing schedule resumed, then became a constant spectator at her events when NHRA began.

Stewart is adapting to life as the supportive spectator at Pruett's events, but his need to understand Pruett's form of racing led him to two recent sessions at Frank Hawley's Drag Racing School. The two are diligently working on a master calendar of all their events because Stewart hopes to attend the majority of her NHRA races.

His first conflict comes at NASCAR's season-opening Daytona 500, where he's hoping COVID-19 procedures have relaxed enough to allow him into the garage and around his team. Stewart has not been inside the NASCAR bubble with SHR since the Las Vegas race last February. But the 500 is also Feb. 14 and he's not sure how that will fly with Pruett on their first Valentine's Day together.

“My personal life is the best it's ever been, by far,” he said. “She gets me. And I enjoy going to her events and being the one doing the supporting. I mean, if she wanted me to support her at basket-weaving competitions I probably wouldn't enjoy it, but I am very happy with this relationship and where my life is right now.”