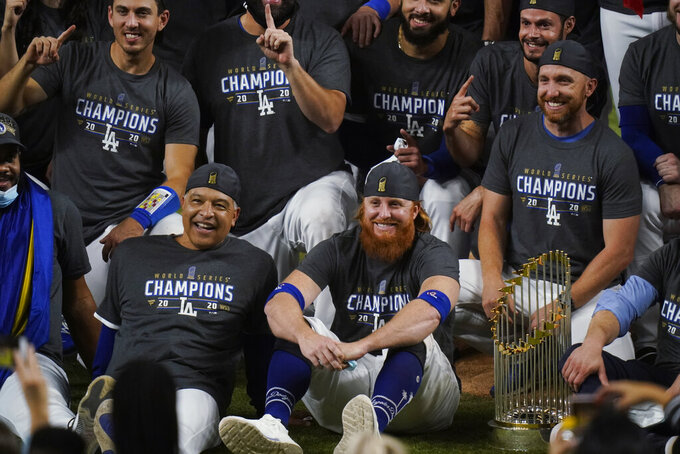 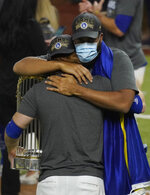 Well, at least the contact tracing should be easy.

The Dodger postseason roster would be a good place to start. So would the team picture on the field after winning the World Series.

You know, the one with Justin Turner sitting front and center among all his teammates, unmasked in his full red-bearded glory.

Turner’s quarantine after testing positive for COVID-19 during the clinching win over Tampa Bay ended up lasting just two innings. The repercussions from his ill-advised decision to celebrate the World Series with his teammates figure to last a whole lot longer.

No, it’s not Turner’s fault he contracted the virus like millions of others. But it is his fault that his appearance on the field afterward overshadowed the feel-good story of the last three decades in Los Angeles.

This should have been about a team that persevered through a season like no other to win for the first time since Ronald Reagan was president. The players on the Dodgers deserved that, manager Dave Roberts deserved that, and the long-suffering fans surely deserved that.

Instead, it became a cautionary tale about what not to do to others when you’re infected with the coronavirus.

Turner paraded around on national television with the World Series trophy in his hand. The star third baseman hugged his teammates, and he kissed his wife.

Then, in an incredibly tone-deaf — and incredibly selfish — grand finale, he took off his mask and plopped himself in the middle of all his happy teammates for an official team victory photo.

A privileged player thought it was his privilege to decide whether he could celebrate or not. By doing so, Turner not only put a lot of people at risk but suggested to everyone watching that the virus that has killed nearly a quarter million people around the nation isn’t such a big deal after all.

It’s not just that Turner went on the field. It’s that he decided his right to celebrate outweighed the rights of everyone else on the field to remain safe.

``When MLB security raised the issue of being on the field with Turner he emphatically refused to comply,’’ Major League Baseball said in a scathing statement Wednesday that called Turner’s actions wrong and said he put everyone in danger.

What could Turner possibly be thinking? How could he possibly be so selfish that he would risk infecting an entire organization just so he could parade on the field afterward?

Luckily, we live in an age where we can turn to Twitter and find out.

“Thanks to everyone reaching out!” Turner tweeted after the game. “I feel great, no symptoms at all. Just experienced every emotion you can possibly imagine. Can’t believe I couldn’t be out there to celebrate with my guys! So proud of this team & unbelievably happy for the City of LA #WorldSeriesChamps.”

The fact Turner felt great isn’t, of course, the point. It’s well-known by now that asymptomatic people can pass the virus on.

Yes, Turner was probably already a superspreader before he even took the field postgame. Just being in the dugout with teammates when the Dodgers came to bat for the first seven innings before he was pulled from the game gave the virus plenty of time to do its thing.

But why would he insist on taking it a step further? Why would he bring on the terrible optics on national television of being nonchalant about a virus that can kill even healthy ballplayers?

Instead of talking about Mookie Betts, Corey Seager, and the satisfaction of finally getting their first World Series title since 1988 fans were talking about the virus. Instead of simply packing up and heading home on Wednesday, the Dodgers and Rays had to figure out who was healthy, who was not, and whether it was safe to travel.

That includes Roberts, a cancer survivor who is sitting next to a maskless Turner in the team picture. Just as he was enjoying the weight of the world being lifted by finally winning the World Series in his third try, Roberts now has a bigger worry — that he could be infected, too.

Before Turner ignored MLB security to take the field his reputation was pristine. He’s the heart and soul of the Dodger team, and it wasn’t October until you saw Turner with his unkempt beard and flowing locks hacking away at home plate.

Off the field he’s known for his charitable efforts and engagement with the community. Everyone loves Turner, from his teammates to Andrew Freidman, the Dodgers director of baseball operations who was seen talking to a maskless Turner afterward.

Friedman said he didn't think anything was going to stop Turner from taking the field. He noted Turner became a free agent when the last out was made, suggesting the Dodgers were powerless to control him, too.

“Now it’s important we all test negative ... to make sure we don’t go out and spread this to other people,” Friedman said.

Let's hope everyone does test negative. Let's hope Turner's positive test — the only one on the Dodgers all season — remains the only one.

In the meantime let's not forget he didn't need to endanger his teammates and everyone else on the field, too.

Because while the virus itself may not have been avoidable, the mess Turner created afterward surely was.