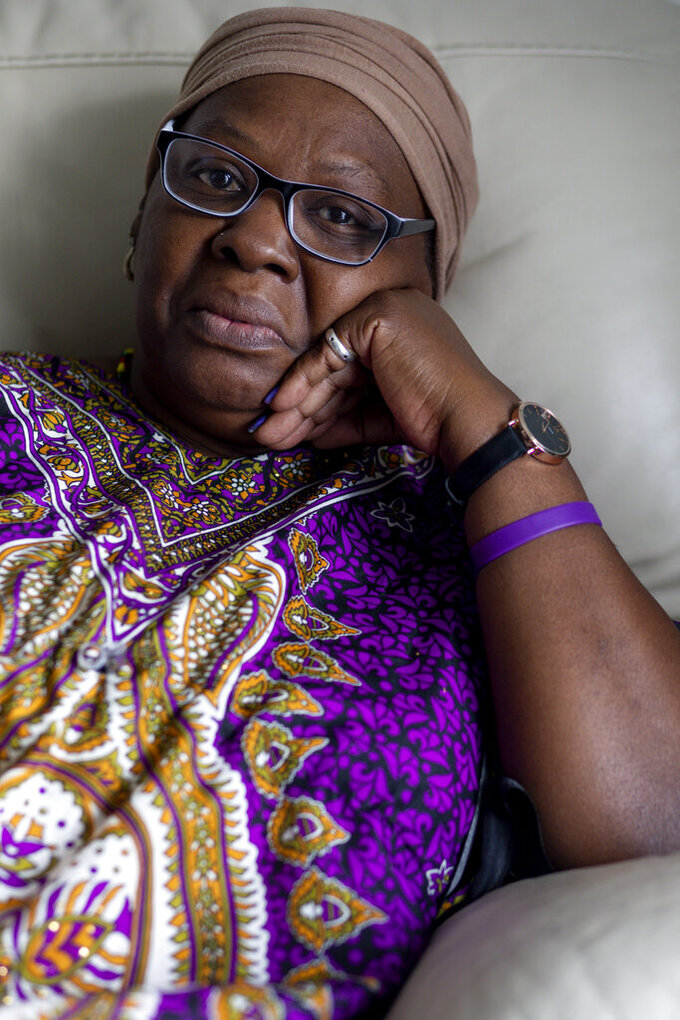 Yochebed Israel, a certified nursing assistant, poses for a portrait inside her Tampa, Fla. apartment on Monday, Aug. 17, 2020. Israel's landlord tried to evict her in violation of the CARES Act after she fell behind on rent after contracting COVID-19. (Ivy Ceballo/Howard Center for Investigative Journalism via AP)

TAMPA, Fla. (AP) — Yochebed Israel was the kind of person Congress had in mind when it voted in March to impose a temporary moratorium on many evictions as the coronavirus spread.

First, the furnace in her Tampa, Florida, apartment broke and her electric bill rose above $460 a month for five months. She fell behind on rent, forced to choose between keeping the lights on or paying the landlord.

Then she contracted COVID-19 in April, she said, missing two months of work without full sick pay as a certified nursing assistant at a long-term care center.

And then, in May, she came home to find an eviction order attached to her door.

“It makes me feel the anxiety of being homeless,” she said.

This story was supported by grants from the Pulitzer Center, the Scripps Howard Foundation and the Park Foundation. It was a collaboration by the Howard Center for Investigative Journalism at the University of Maryland, Big Local News at Stanford University, the University of Arkansas and Boston University.

The federal CARES Act, enacted March 27, was supposed to protect Israel and people in up to 20 million other rental households from just that fate. It barred landlords whose properties got federal benefits from filing to evict tenants for 120 days.

But a two-month investigation by the Howard Center for Investigative Journalism at the University of Maryland found that cracks in the federal law appeared immediately.

Confusion about the moratorium’s language, which played out in conflicting guidance from federal agencies and the courts, led to selective enforcement. Landlords were expected to determine for themselves if their property was covered by the law. And renters had virtually no legal help to fight back if wrongfully evicted.

Israel’s property manager, Tzadik Management, said through a spokesperson it didn’t know the property in Hillsborough County, Florida, was secured by a federal loan. Court records show Tzadik has since asked to dismiss all 24 evictions identified by the Howard Center, including Israel’s, that it filed during the federal moratorium.

The Howard Center focused on eviction filings in 10 counties that are home to Memphis, Tennessee; Tulsa and Oklahoma City in Oklahoma; Atlanta and Savannah in Georgia; Tampa and St. Petersburg in Florida; New Orleans and Milwaukee — all areas hit hard by the coronavirus. Prior to the pandemic, at least 20% of renters in those counties spent half or more of their income on rent and all had eviction filing rates well above the U.S. average.

The eviction moratorium expired July 24, and the Senate left Washington three weeks later without an agreement with the House to extend it.

The Trump administration said late Tuesday it would halt evictions for most renters through the end of the year to stop the spread of the coronavirus. The moratorium does not include money to help tenants in arrears but does include criminal penalties for landlords. It takes effect Friday, according to a draft in the Federal Register.

Emily Benfer, a law professor at Wake Forest University and chair of the American Bar Association’s COVID-19 Task Force Committee on Eviction, praised the administration’s action as a “tremendous intervention that promises to protect the health and safety of millions of renters.” But she also warned in an email Tuesday night that it is only a “half measure.”

“Without rental assistance to cover the mounting debt, it only delays eviction and its devastating consequences,” she wrote.

The CARES Act eviction moratorium only covered rentals with mortgages backed by federal programs such as the Federal Housing Administration, the Department of Veterans Affairs and the Federal National Mortgage Association, also known as Fannie Mae; properties that received Low-Income Housing Tax Credits, and people who got federal housing assistance, such as vouchers, to help pay the rent.

CONFUSION ON THE GROUND

Eric Dunn, director of litigation for the National Housing Law Project, said Congress should have passed a blanket moratorium in the spring covering all evictions “for any reason.”

“What we got was a moratorium for nonpayment of rent from some housing, which is complicated and difficult to figure out,” he said.

Landlords and property managers in four of the 10 counties examined by the Howard Center filed at least 101 evictions that violated the federal moratorium, a review of court and other public records found. The total is conservative because court data in some counties lacked key details needed to confirm CARES Act violations.

Courts or plaintiffs have since moved to dismiss all of them.

The federal moratorium placed the burden on landlords not to evict tenants in covered properties. In an effort to reinforce that, high courts in Georgia, Oklahoma and Tennessee ordered landlords to sign affidavits saying their property was not covered by the federal law. But even in those states, the Howard Center found wrongful evictions.

The CARES Act said if a landlord accepted subsidies for even one tenant in a property, it could not evict the rest of the tenants living there. But a Department of Housing and Urban Development FAQ said the agency “does not have the authority to extend jurisdiction over unassisted tenants.”

Michael Scaljon is general counsel for Ventron Management, which operates rental properties in Florida and Georgia. He said the company interprets the CARES Act to protect the tenants receiving Section 8 assistance but not their neighbors, and has filed evictions accordingly.

A Nebraska district court reached a different conclusion. In a June ruling, the court rejected the HUD guidance, saying the CARES Act language was “clear and unambiguous” that if one household receives federal assistance then all tenants in the property are protected from eviction.

In Florida, meanwhile, two neighboring county clerks differed in their interpretations of the Florida Supreme Court’s order to suspend the issuance of all eviction notices, called writs of possession.

The Pinellas County clerk stopped issuing the writs, but neighboring Hillsborough County did not.

The only way tenants could find out whether their building was covered by the federal moratorium was to search online databases, some of which only a mortgage holder could access.

Challenging a landlord’s assertion that an eviction was valid could be difficult even when a tenant had a lawyer. Court records showed the vast majority of renters being evicted had none.

Yet tenants bear the burden of wrongful filings, even if cases are dismissed.

“Once an eviction is filed, it immediately results in a scarlet E for a tenant or a renter,” Benfer said. “It plummets credit scores and creates barriers to future housing opportunities.”

A New Orleans court dismissed an eviction filing in June against 35-year-old Ernest George because his landlord accepted Section 8 vouchers from other tenants at the property, according to his lawyer. For the ironworker and his family, legal representation and the CARES Act provided a safety net.

Evictions hit minority communities harder even before the pandemic. George’s majority Black neighborhood in Orleans Parish had an eviction rate five times higher than the national average in 2017, according to a study of New Orleans eviction data.

When landlords don’t receive rent, it ripples into the local economy. From the landscaper to the plumber, people lose business and income, said Florida property manager Dave Sigler.

“It’s important that these rents get paid,” he said. “Not just to keep the owners having their houses, but it keeps the whole economy going on such a larger scale.”

Landlords did not receive direct assistance from the CARES Act, but their federally backed mortgages were protected from foreclosure. The law provided up to 90 days of forbearance for multifamily properties and as much as a year for properties with four or fewer units.

In Tulsa, the city and nonprofits launched a massive effort to pay landlords months of back rent with private funds when courts reopened in June. If landlords accepted payments from the Landlord Tenant Relief Program, they had to agree not to evict tenants for nonpayment of rent for the next 90 days.

But organizers said landlords in less than 15% of eligible eviction filings took the offer. They didn’t want to give up their right to evict.

Housing experts had warned that the scope of evictions would start to show in September; landlords were supposed to wait 30 days after the federal moratorium expired to file evictions. Trump’s decision to extend and broaden the eviction moratorium could put off that reckoning until January — at least for some.

Ashley Fitzgibbon could be one of them.

The Oklahoma City single mother of six said she thought she was “finally getting it together” before she lost her house-cleaning and babysitting jobs at the end of March.

“It was just such a hard hit,” she said.

Fitzgibbon’s rental house was not covered by the CARES Act and Oklahoma never instituted a statewide eviction moratorium. When the courts reopened in May, her property manager served her with a summons and has done so every month through August.

So far, the 35-year-old has managed to get the cases dismissed by borrowing money, adding a third roommate in her five-bedroom rental house and working odd jobs such as dog sitting and errand running to make rent each month.

“I’m so incredibly thankful that there were people that, like, had that safety net, and it sucks that I wasn’t one of them,” Fitzgibbon said.

She’s made the tough decision to sell her 2016 Ford Expedition. The proceeds, she said, will give her a financial buffer through the rest of the year.

And besides, she said she wasn’t using it much anyway. She doesn’t have the money for gas.