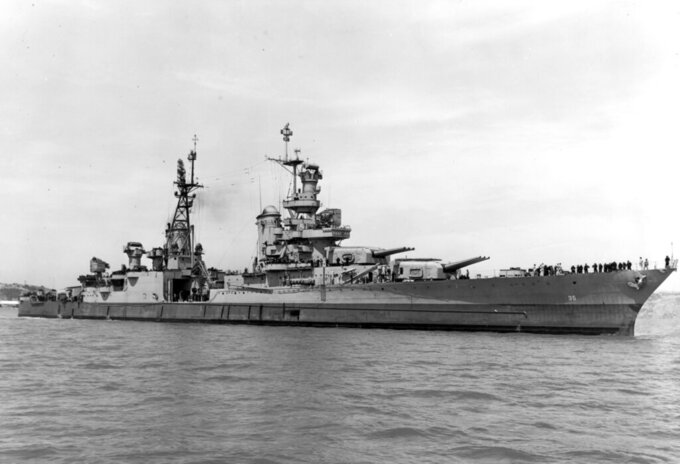 FILE - In this July 10, 1945, photo provided by U.S. Navy media content operations, USS Indianapolis (CA 35) is shown off the Mare Island Navy Yard, in Northern California, after her final overhaul and repair of combat damage. Congress has awarded the Congressional Gold Medal, its highest honor, to surviving crew members of the USS Indianapolis, the ship that delivered key components of the first nuclear bomb and was later sunk by Japan during World War II. (U.S. Navy via AP)

WASHINGTON (AP) — Congress has awarded the Congressional Gold Medal, its highest honor, to surviving crew members of the USS Indianapolis, the ship that delivered key components of the first nuclear bomb and was later sunk by Japan during World War II.

The ship, with 1,195 personnel aboard, delivered enriched uranium and other parts of the atomic bomb ‘‘Little Boy" that was later dropped on Hiroshima, Japan, in August 1945.

Four days after delivering its top secret cargo, the ship was sunk by Japanese torpedoes on July 30, 1945. Of nearly 900 men who went into the Philippine Sea, just 316 survived before being rescued nearly five days later. The death toll of 879 was the largest single disaster at sea in U.S. Navy history.

Survivors were stranded in the open ocean with few lifeboats and almost no food or water, enduring severe burns, dehydration and shark attacks.

The Gold Medal was awarded to the ship's entire crew, living and dead, and will be displayed at the Indiana War Memorial Museum in Indianapolis.

After the sinking, the crew “fought to stay alert, to look after each other — literally to hold on for dear life,'' said McConnell, R-Ky. He and other speakers were shown on video because of the global coronavirus pandemic.

“Those who perished in the water gave our nation the ultimate sacrifice ... but the true legacy of the Indianapolis was secured before those torpedoes struck,'' McConnell said. "Her crew turned the tide of the war. So to her crew members who are still standing watch: Your Congress and your nation say thank you.''

Retired Navy Capt. William Toti, who led a nuclear submarine named in honor of the Indianapolis, said the Gold Medal honors the crew's accomplishments — not the fact that the ship was sunk.

The medal “recognizes a fighting ship's crew, one that helped end the most terrible war this world has ever known,'' Toti said. He called the crew members ”among the best the United States Navy has to offer.''

None of the crew members would call himself a hero, Toti added, "but they would all say they served in a crew of heroes.''

Navy Secretary Kenneth Braithwaite addressed the surviving crew members directly, saying “All Americans owe you a forever debt of gratitude.” Braithwaite called the sinking “one of the darkest chapters in our Naval history'' and said, “We can never forget the astounding grit and bravery shown by those who lived to tell the tale” or "the important lessons our Navy learned from that tragedy.''

The crew members epitomized the Navy's ethos of service above self, Braithwaite said. "Your service, your sacrifice embodied the core tenets of our Navy: honor, courage and commitment. We the Navy salute you and thank you for your service. Bravo Zulu shipmates.''