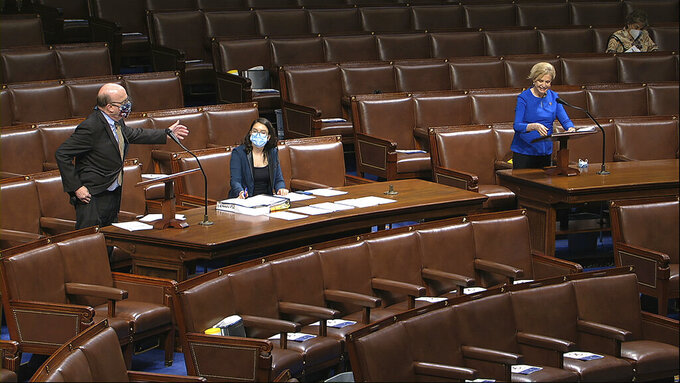 In this image from video, Rep. Jim McGovern, D-Mass., gestures to Rep. Carolyn Maloney, D-N.Y., as they speak on the floor of the House of Representatives at the U.S. Capitol in Washington, Thursday, April 23, 2020. (House Television via AP)

WASHINGTON (AP) — If the coronavirus threat is waning, as President Donald Trump suggests, you wouldn't know it by watching the House.

The nation's representatives on Thursday chose overwhelmingly to wear masks at their first meeting in a month, creating the defining visual of a Congress in the throes of the historic pandemic. There were exceptions — chiefly, a handful of Republicans who attended the session bare-faced.

But to walk around Capitol Hill as lawmakers returned was to see evidence that the rampaging virus had delivered the saddest possible lessons to members of Congress in the weeks since they last met on March 27. Then, gloves and masks were the exception as they approved the largest stimulus package in history. Lawmakers had to be reminded to shed the most Washington of customs — a firm handshake — for elbow bumps. Social distancing meant sitting in every other seat on the House floor.

No more. Arriving lawmakers on Thursday found gloves and masks waiting for them on tables outside the chamber doors. Inside, flyers guided lawmakers to every fourth seat. And when it came time to vote, members were to show up in alphabetical order, filing in specific doors and out others.

The result was the bracing sight of Congress doing the nation's business in a variety of masks — from House Speaker Nancy Pelosi in a white silken scarf to the clerks and aides scattered about the room.

For some, the reasons were searingly personal and happening in real time.

Financial Services Committee Chairwoman Maxine Waters, D-Calif., said from the House floor that her “dear sister” was infected by the coronavirus and lay dying at a hospital in St. Louis.

Rep. Brenda Lawrence, D-Mich., said she had just gotten a phone call. “Another dear friend of mine has passed,” she said. "I stand here today with my heart broken.”

It wasn't just the House. Sen. Elizabeth Warren, D-Mass., said her brother died of the virus on Tuesday.

“It’s hard to know that there was no family to hold his hand or to say ‘I love you’ one more time — and no funeral for those of us who loved him to hold each other close,” Warren tweeted.

Trump, too, has suffered loss during the pandemic.

His friend and donor, Stanley Chera, died this month. He was in his late 70s.

Trump spoke of his friend on March 29.

“The speed and the viciousness, especially if it gets the right person, it’s horrible," Trump said.

But with the most Americans out of work since the Great Depression and an eye on the November elections, the president is nudging some parts of the country to return to work.

“There is a pent-up demand in this country to get it back to where it was,” he said Thursday.

The president does not wear a mask during his daily briefings. But on Thursday, most lawmakers were in no mood to take such a risk.

They made the trip back to Washington to approve the latest coronavirus relief bill, a nearly $500 billion package speeding money to small businesses and hospitals. Former member Ileana Ros-Lehtinen, R-Fla., marveled at the sights in the socially distanced chamber.

“This new normal takes some getting used to,” she tweeted. Would the scene, she wondered, "be a curiosity when looked at again years from now? Or will it just be the way things will be from now on?"

Like so much about the post-pandemic future, that's uncertain. So is whether the tradition-loving Congress ultimately will allow remote or proxy voting during future pandemics.

For now, Congress was just trying to get through the day.

It started with Pelosi entering the Capitol at the center of her security entourage, silken scarf perched on the bridge of her nose.

Across the street, lawmakers arrived to testify before the Small Business Committee only to be ushered into an office across the hall. There, they checked in, were handed a sign with their name on it and were escorted to specific seats in the hearing room, which was festooned with signs urging everyone to stay “six feet apart.” Staffers quickly wiped down everything in between speakers.

The House, meanwhile, opened for business for the first time in weeks. Among the dozens of members present, only two were not wearing masks: Reps. Jim Jordan of Ohio and James Comer of Kentucky.

“I didn't take a mask for somebody who needs it more,” said Rep. Tim Burchett, R-Tenn., another non-mask-wearer outside the hearing. “There's a shortage of masks, haven't you heard?”