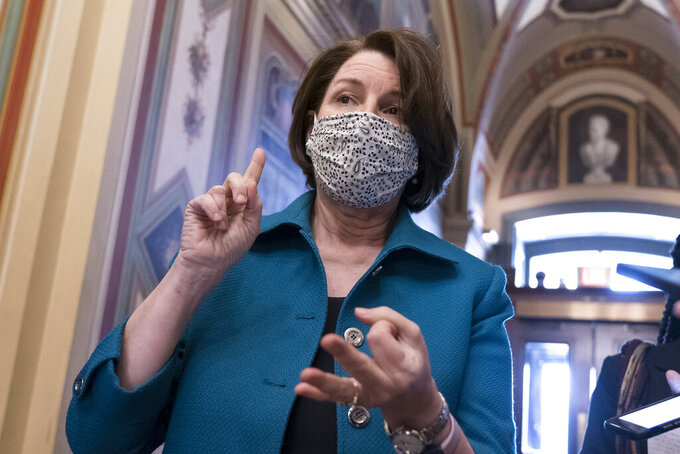 FILE - In this Wednesday, March 17, 2021, file photo, Senate Rules Committee Chair Amy Klobuchar, D-Minn., answers questions from the media at the Capitol, in Washington. Congressional Democrats, including Klobuchar, and nonprofits are pushing for a federal bill that would give nonprofits $50 billion to help them retain employees, hire newly unemployed workers and expand their operations. (AP Photo/J. Scott Applewhite, File)

Congressional Democrats are pushing a federal bill that would give nonprofits $50 billion to help them retain employees, hire newly unemployed workers and expand their operations to combat the devastating effects of the coronavirus pandemic.

The bill, which was reintroduced in the U.S. Senate this week by U.S. Sen. Amy Klobuchar and three other Senate Democrats, would give individual nonprofits grants of up to $3 million. However, experts say the bill's chances of passage this time remain unclear.

Most of the money will cover wages and benefits for existing or new employees with salaries of up to $50,000. Nonprofits can also use some of the funds to pay expenses, like rent and utilities, and program costs. The bill would also allow intermediary organizations, which help and provide expertise for nonprofits, to get grants of up to $100 million.

Klobuchar sponsored a similar bill last May, but it failed to advance. Since then, the nonprofit sector has shed nearly a million jobs, with one estimate from The Johns Hopkins Center for Civil Society Studies showing more than 926,000 nonprofit jobs were lost during the first year of the pandemic.

“As demand for their services continues to soar, many of these organizations are struggling financially,” Klobuchar said in a statement. “We need to help charitable nonprofits keep their doors open, scale their invaluable services, and provide opportunities for unemployed Americans to return to work serving their communities.”

The Minnesota senator and six other Senate Democrats also sent a letter to congressional leaders urging more nonprofit relief, like the ones in the bill, in future coronavirus aid packages.

Nonprofits with 500 or fewer employees have been able to get forgivable loans for expenses through the government’s Payment Protection Program. The $1.9 trillion relief package that was recently signed into law by President Joe Biden expanded eligibility for those loans to include more nonprofits.

Shena Ashley, the head of the Urban Institute’s Center on Nonprofits and Philanthropy, says advocates have a stronger case to make for more funding this time around since nonprofit workforce numbers have been so dismal.

But, she suggests getting the legislation passed could be an uphill battle since many nonprofits have been able to benefit from PPP loans. Those loans are provided at a low interest rate and are fully forgivable under conditions that include spending a certain percentage on payroll costs.

“I was not surprised to see it come up again, but I'm also not super hopeful,” she said, adding, it’s “harder to know why we need to create something explicitly for nonprofit organizations.”

But supporters say more funding is critical because the needs are still large and it can help with recovery efforts.

Jim Clark, president and CEO of Boys & Girls Clubs of America, said in a statement that the bill “would enable Clubs to continue providing critical community support” and “meet the increased demand and cost for these vital services.”

“Nonprofits support communities in their time of need – it’s time to support them in theirs,” he added.

More than 100 organizations have endorsed the bill, including the National Council of Nonprofits. David Thompson, the group’s vice president of public policy, says the council will push for the bill harder this time around because nonprofits can play a larger role in the economic recovery.

“People who are unemployed can come to work quickly for a nonprofit, get paid, pay their bills and pay into the economy,” he said. “So we see it as a jolt to the economy.”

Companion legislation has been reintroduced in the U.S. House by Congresswoman Linda Sánchez, a Democrat from California.

“Nonprofits have shown considerable grit and resilience over the past year, but they can’t continue to operate as they have,” said Erica Barnhart, the director of the Nancy Bell Evans Center on Nonprofits and Philanthropy at the University of Washington. “It’s simply not sustainable. This funding won’t entirely make up for loss of revenue, but it will be a valuable boost to nonprofits who can take advantage of it.”