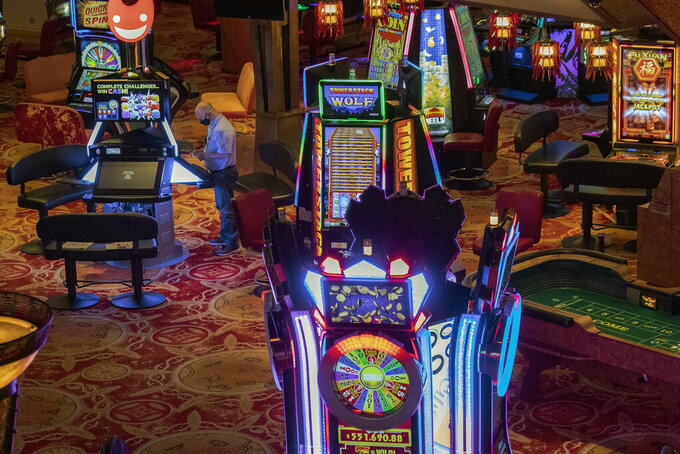 A team member adjusts the machines at the Mohegan Sun casino, Thursday, May 21, 2020, in Uncasville, Conn. Connecticut's two federally recognized tribes, Mashantucket Pequot and Mohegan tribes, said they're planning to reopen parts of their southeastern Connecticut casinos on June 1, despite Gov. Ned Lamont saying it's too early and dangerous. (AP Photo/Mary Altaffer)

HARTFORD, Conn. (AP) — Connecticut faces the prospect of losing about 45,000 child care spaces without government intervention, given the serious financial and staffing challenges the coronavirus pandemic has imposed on the industry, the state's top childcare official said Tuesday.

Beth Bye, commissioner of the Connecticut Office of Early Childhood, said the state was already losing day care slots prior to the pandemic because so many providers operated on tight budgets. Citing projections from the Center for American Progress, she said more licensed family day care providers and day care centers are expected to close or reduce slots as they grapple with strict social distancing rules, nervous parents unwilling to send their children, anxious employees reluctant to return, and the scheduled end of federal financial assistance next month.

“So before this (pandemic), we were losing programs. Now we’re saying to programs that were barely making it, you can take half as many kids,” Bye said during a video news conference. “The usual demand is down and we’ve cut their supply in half. There’s no way they can make it. So this is why the federal funds are critical.”

Unlike many other states, Connecticut allowed day care providers to remain open during the pandemic, but with enhanced safety precautions. Providers that didn't close their doors have been required to limit groups to no more than 10 children in one space, impose temperature checks of staff and children, and increase hygiene and sanitation practices. Grants have been made available to encourage programs to remain open to care for children of health workers and first responders.

“The state of Connecticut, but the entire country, is on the precipice of a childcare crisis. In good times, these are small businesses that operate on razor thin margins. And now, with the pandemic, they are facing financial ruin,” she said, citing national data that show more than 50% of childcare programs across the U.S. could close at a time when states are reopening and employees are returning to work.

A report released Tuesday by Gov. Ned Lamont's reopening advisory committee recommends a system of phased-in testing for COVID-19 in Connecticut, from about 45,000 tests per week now to 200,000 per week by Sept. 1, when faculty, staff, students at state universities and schools would be tested.

According to the report “serial surveys” of the coronavirus are also under consideration in order to understand where new infections might be happening. This could involve testing 3,000 randomly selected adults every one-to-two months.

The report also recommends the state work toward “universal immunization” for influenza within the state's population, noting the importance of reducing the number of patients hospitalized for the flu in preparation for an expected second round of the coronavirus. The report warns “the likelihood of a COVID-19 resurgence is high, even in the optimistic scenario.”

As of Tuesday, there have been 3,769 COVID -19-associated deaths in Connecticut, an increase of 27 since Monday. After an uptick over the weekend, the number of hospitalizations dropped by 12. More than 225,000 tests have been performed so far.

Gov. Ned Lamont said he hopes the tribal casinos will agree to delay their planned, partial reopenings on June 1, reiterating his concerns Tuesday about possibly spreading the cononavirus, especially among older people. A team of state officials, led by the Department of Consumer Protection commissioner, the acting Department of Public Health commissioner, and the Department of Economic and Community Development commissioner, toured Mohegan Sun on Tuesday. The group plans to tour Foxwoods Resort Casino, possibly later this week, to review their plans to protect employees and visitors.

“I'm going to get a report back and we're going to give Mohegan Sun some constructive observations about what we saw as we try to get closer to a safe resolution of this,” said Lamont, who has suggested he might pull the tribes' liquor licenses or warn patrons of the potential risks before they enter the casinos, located in sovereign nations. The tribes contend they're ready to open safely.

Lamont said Tuesday that his budget director received the final itemized lists of COVID-related expenses from cities and towns seeking reimbursement late last week. A breakdown is expected to be released later this week regarding how much of the $1.38 billion Connecticut has received from the federal government under the CARES Act will go to certain municipalities.

Last week, Joe DeLong, the executive director of the Connecticut Conference of Municipalities, released a statement demanding the Lamont administration begin sharing some of the federal money immediately with cities and towns. The federal law left it up to states to decide if and how much of the aid to provide municipalities with populations of less than 500,000 people.

Paul Mounds, Lamont's chief of staff, said Tuesday that the administration is trying to make sure they're “utilizing the funding in the most appropriate manner, as provided by federal guidelines.”