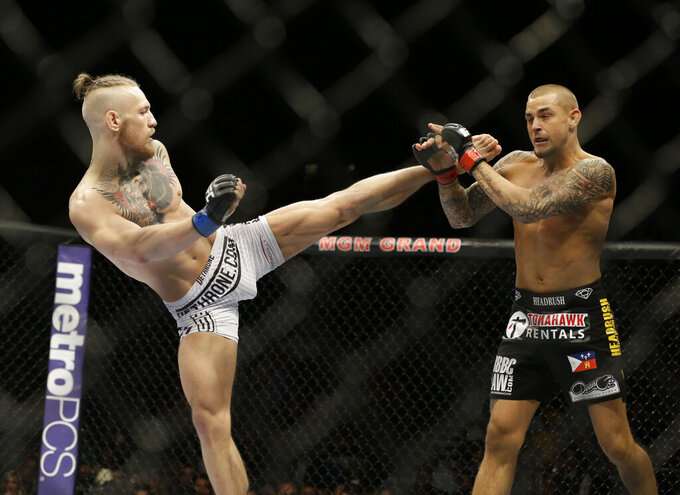 FILE - In this Sept. 27, 2014, file photo, Conor McGregor, left, kicks Dustin Poirier during their mixed martial arts bout in Las Vegas. McGregor returns from a year-long layoff for a rematch against Poirier in the promotions's first pay-per-view of the year, at UFC 257 on Jan. 24 at Abu Dhabi. (AP Photo/John Locher, File)

Conor McGregor had ambitious plans for 2020. Like most everybody's big plans last year, they were ruined by the coronavirus pandemic.

Now safely inside the UFC's Fight Island bubble, the most popular man in combat sports is getting back to work on accomplishing everything he set out to do when he rededicated himself to fighting over a year ago.

“I feel like I’m only starting, man," the 32-year-old McGregor said this week. "Everyone wants to say, ‘Hey, Conor, you’ve done it all! You’re so rich! You’re richer than Dana! What are you doing here?’ I want to be here. I want to perform for the fans.”

McGregor (22-4) returns at UFC 257 in Abu Dhabi on Sunday for a rematch with Dustin Poirier, a fellow power puncher with a flair for dramatic finishes. The winner of this pay-per-view event airing Saturday night in North America will be one fight away from regaining the lightweight title both men have held in recent years.

UFC 257 is co-headlined by title-contending lightweights Dan Hooker and Michael Chandler, who is making his UFC debut after a decade in the rival Bellator promotion.

McGregor now struggles to conjure the trash-talking, flamboyant persona that once made him more famous than anything he had yet achieved in the octagon. Now financially secure and raising a young family, McGregor still lives a wild life at times, but it is cushioned by a growing sense of his finite time left in sports — despite his brash pronouncements of youth — and his evaluation of his legacy.

“All the money, all the belts, all that comes and that goes,” McGregor said. “You know what lives on? A fighter’s highlights. Look at Roy Jones Jr.’s highlights, Mike Tyson’s highlights. I still look at them today. Ali’s highlights. I want my highlight reel to be like a movie. That’s what I’m after. I’m looking to get in and perform and put on amazing highlights that I can sit as an old man with my son, and just watch back and just enjoy life.”

When McGregor knocked out veteran welterweight Donald “Cowboy” Cerrone in just 40 seconds last January, he seemed set for a ferocious return to the sport he had largely neglected for the previous three years. McGregor spoke of wanting to fight four times in 2020, culminating in another shot at lightweight champion Khabib Nurmagomedov.

The pandemic understandably curtailed those plans, but Nurmagomedov’s retirement after beating Justin Gaethje last fall cleared a path to regaining the lightweight belt for McGregor or Poirier. Both men already have lost to Nurmagomedov, who has sent mixed signals about his likelihood of reneging on his retirement vow.

Despite dropping 15 pounds from his last fight, McGregor appears comfortable and healthy at 155 pounds, where he has won just one fight in his career, beating Eddie Alvarez in 2016 to become the first fighter in UFC history to hold two division titles simultaneously.

McGregor and Poirier were even smaller — two up-and-coming featherweights — when they met in September 2014 in the third-billed bout at UFC 178. McGregor stopped Poirier just 1:46 into the opening round, landing a big left hook to the ear that ended the action swiftly.

Poirier (26-6) could have been crushed by the loss, particularly while he watched McGregor's ascent. Instead, he won nine of his next 11 fights, even capturing the interim lightweight title for 4 1/2 months in 2019 with an impressive win over Max Holloway.

Poirier is among the most durable and most successful UFC fighters of his generation, ranking 10th in the promotion's history with 18 UFC victories and seventh with 11 post-fight bonuses. A ferocious striker with a high work rate, he has six knockout victories as a lightweight.

“Every fight is a chip on my shoulder,” Poirier said. “I’m trying to prove something. The work that I put in, I’m trying to make it pay off. I’m trying to put my family in a better position, and this is no different. I know what a win over Conor McGregor means in combat sports, and I know that whoever wins this fight is fighting for gold, and that’s why I fight.”

Although McGregor and Poirier are both well-versed in the promotional tool of performative verbal sparring, they've been model citizens in Abu Dhabi. Both men have been unfailingly polite to each other, and McGregor's company even made a generous donation to Poirier's charitable foundation.

At their final news conference, Poirier laughed at the paucity of ferocity between the UFC 257 main-event fighters, saying it might seem like “we're up here giving each other back massages.”

“I know we have this competitive fire, and it’s still there,” McGregor added. “There’s no denying that. We’re going to have a clash, and it’s going to be a good, firework-filled bout, but the respect is admirable for this man from me.”