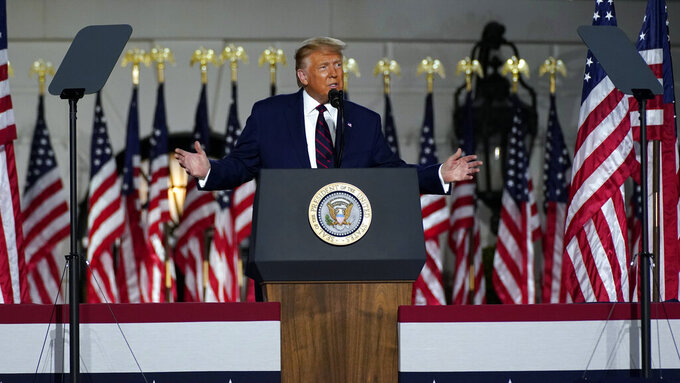 President Donald Trump speaks from the South Lawn of the White House on the fourth day of the Republican National Convention, Thursday, Aug. 27, 2020, in Washington. (AP Photo/Evan Vucci)

NEW YORK (AP) — Rachel Maddow ended her fact-check mission with a lightning round after President Donald Trump's nomination acceptance speech — 12 corrections in about a minute. Or, rather, 11 corrections and a prediction.

“Joe Biden will not bulldoze the suburbs,” she said.

Throughout the GOP convention this week, MSNBC frequently countered speakers by breaking in to point out untruths, a notably aggressive approach at dealing with the vexing problem of lies or misleading statements made in real time.

Daniel Dale has the truth-telling assignment for CNN, and his breathless debunking of 21 statements made by the president became an online curio on Friday.

“Oh, that's it?” a bemused Anderson Cooper said when Dale came up for air after about three minutes.

MSNBC's effort, usually directed by Maddow on-air, was a featured part of the coverage. The network did get some criticism from Republicans since there was no similar on-air effort to question claims during the Democratic convention the week before.

“Both sides do it,” said Tim Graham, director of media analysis for the conservative watchdogs Media Research Center. “One gets checked.”

Maddow seemed almost apologetic when breaking in during the first night of the convention to point out that medical experts have expressed some doubts about a plasma-based treatment for COVID-19 that was touted at the convention.

“We hope that we don't have to keep doing this all night,” she said.

There were usually three to five such breaks in the coverage each night, although they seemed to increase in frequency and duration as the convention went on. Certainly there seemed to be less reluctance on Maddow's part.

“This is the point where we pop up and say some of what you just heard is horse-hockey,” she said Thursday. “I'm sorry to have to do this. We don't relish doing this. But, especially on the issue of COVID where they are distributing delliberately false information that is misinforming the public when we are in the middle of a pandemic, we feel the responsibility.”

She cut in after Cissie Graham Lynch praised Trump for a commitment to religious freedom, pointing out the president's efforts to ban travel from some mostly-Muslim countries, and the president's support of two candidates for Congress who said Muslims should be banned from holding public office in the U.S.

Since many of the GOP convention speeches were pre-taped and the messages known in advance, NBC said it had time to prepare and bring in guest experts to explain the nuances of issues.

“I thought that it was a worthy effort and I'm pleased they did it,” said Mark Lukasiewicz, a former NBC News executive who is now dean of Hofstra University's School of Communication. “It was important to do that. Having said that, it doesn't eliminate the problem.”

No matter how earnest they effort, it's hard to counter deliberate attempts to mislead, he said.

“The best you can do with live lying is a draw,” Lukasiewicz said. “You can't win.”

Some of the efforts also stretch the definition of fact-checking, like when MSNBC interviewed Seattle Mayor Jenny Durkan after a convention speech where South Dakota Gov. Kristi Noem criticized “Democrat-controlled cities overrun by violent mobs.”

Durkan said Noem's characterization was purposefully wrong. “I think she needs to get off Twitter and Fox News and come see our cities,” she said.

But Graham said that there WAS actual violence in Seattle. How someone describes what went on there is more a matter of interpretation than fact, he said.

Similarly, MSNBC brought in a legal expert following Eric Trump's speech not to question what the president's son spoke about, but to outline the New York attorney general's efforts to compel testimony in an investigation involving the Trump company's finances.

“They are obviously pandering to their base,” Graham said. “They know their viewers can't stand the fact that they were covering the convention.”

NBC News would not make an executive available to speak about the fact-checking efforts.

Fox News had a more informal operation during the Democratic convention. “There he goes, lying again,” anchor Sean Hannity said in cutting off a speech by former President Bill Clinton.

Maddow's anchor colleague, Joy Reid, said as the convention's third night was coming to a close that she saw why it was necessary.

“They are creating a separate and new reality that is the complete opposite of reality and saying it with a straight face in droning fashion into the camera,” Reid said.