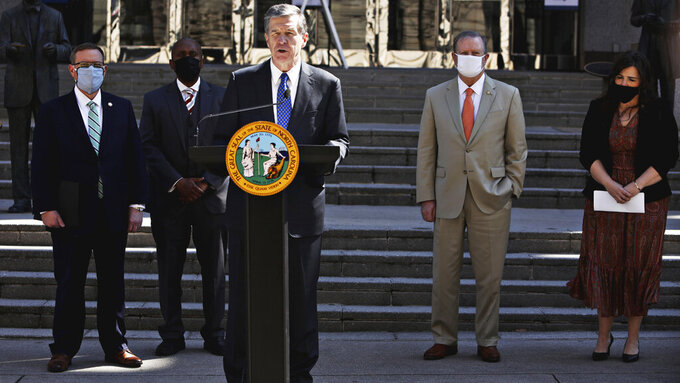 North Carolina Gov. Roy Cooper, center, and lawmakers gather Wednesday, March 10, 2021, for a news conference to announce that leaders of the Republican-led state legislature and the governor have reached an agreement to reopen the state's K-12 public schools to full-time daily instruction in Raleigh. (Juli Leonard/The News & Observer via AP) 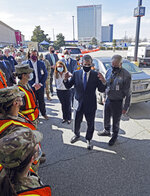 The agreement, unveiled in a rare bipartisan news conference with the state's most powerful leaders, comes nearly two weeks after Cooper vetoed a GOP bill that would have mandated all districts have at least partial in-person instruction as the coronavirus pandemic improves. Cooper and Senate leader Phil Berger had said separately Tuesday that talks were taking place to find a resolution to the vetoed bill.

“The good news is that I think we all want the same thing -- to open our schools to in-person instruction for all students and to do it safely with important emergency protections,” Cooper said at the announcement.

Under the new plan, K-5 schools would be required to provide full-time instruction — likely five class days a week — for all students, without physical social distancing. Data have shown that COVID-19 transmissions involving young children are very low.

Local school boards also would have two options for their middle and high schools. They either can adhere to having students separated by at least 6 feet (1.8 meters) — limiting in-person instruction to just a couple days of week due to space constrictions — or move to daily instruction like elementary schools, with no 6-foot requirement. All schools would still have to comply with other school safety guidance, like a mask mandate. And the state's 115 districts would still provide remote instruction this school year for families that still want it.

The governor said decreasing case counts and improving vaccination rates helped make possible such a compromise. Districts would have 21 days to comply with the new law, but they could make changes as soon as it was signed.

Senate leader Phil Berger, a Rockingham County Republican, said the legislation was a “fair compromise that returns many students to full-time, in-person instruction.”

The measure should get Cooper's signature soon. The Senate voted unanimously for the bill late Wednesday, and a House vote was expected Thursday. It would still require districts that decide when middle and high schools can meet without social distancing to alert state health officials to their decisions. These schools would have to participate in a Duke University project that is analyzing transmission rates in schools. Cooper could still order individual districts to pull back in-person classes and give reasons why.

Nearly all of the school districts already were returning to some form of in-person instruction, as Cooper, legislators and state education leaders urged local boards to reopen buildings and as teachers received vaccinations. But Berger and House Speaker Tim Moore said a law was necessary to push hesitant districts.

Cooper complained the vetoed measure would have kept state officials from pulling back classroom teaching should there be new COVID-19 outbreaks. Republicans countered that too many of the state's nearly 1.5 million students were suffering academic and behavioral problems in districts that had yet to untether from a year of virtual-only learning.

Superintendent of Public Instruction Catherine Truitt, a Republican whose children attend Wake County schools, said she's “been worrying about the extent to which they’re falling behind academically, the missed opportunities for teenagers from not being at school. But most of all, we worry about their mental health."

The legislation “will needlessly encourage school boards to push students, educators, and staff into school buildings that do not comply with CDC guidance during a pandemic," Kelly said in a news release, threatening the health of those inside.

A compromise may not have materialized had the the legislature overridden Cooper's veto. The Senate last week fell just one vote short of approving the override and sending it to the House. The GOP was prepared to put political pressure on a Democratic senator who had co-sponsored the vetoed legislation but was absent for the override vote.

The Republican majorities in the General Assembly aren’t veto-proof, meaning Cooper can block legislation when Democrats are unified.

“The results of those efforts are why we have a truly bipartisan bill before you today that everyone can support,” said Senate Minority Leader Dan Blue, a Wake County Democrat. The outdoor news conference occurred on the walking mall separating the old Capitol, where Cooper keeps his office, and the Legislative Building.