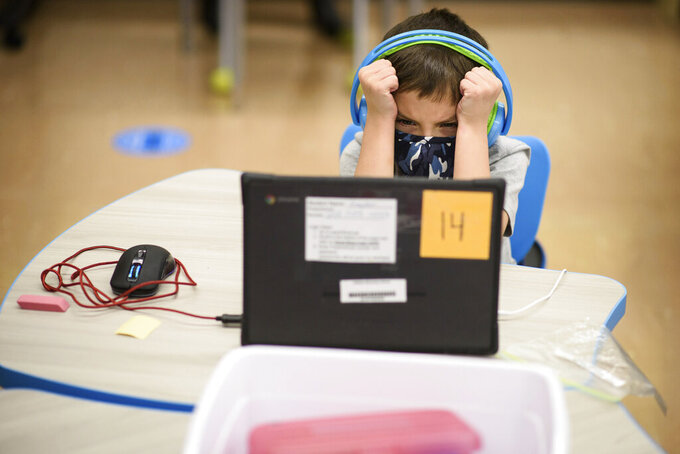 First-grader Kayden Welch gets frustrated with his computer during the first day back to in-person learning at Cliffdale Elementary School in Fayetteville, N.C., on Monday, March 15, 2021. Students last went to school buildings for classes on March 13, 2020. (Andrew Craft /The Fayetteville Observer via AP)

A bill pushed by Republican House Speaker Tim Moore that received unanimous support among state lawmakers requires all K-12 school districts in the state to offer at least six weeks of school this summer to help pupils who have struggled to succeed, particularly with virtual learning, since the coronavirus forced districts to go fully remote in March 2020.

“This pandemic has challenged students and teachers like never before. Providing a summer opportunity for academic growth plus mental and physical health will help schools begin to address those challenges," Cooper said in a statement.

The Democratic governor also signed a proposal from GOP Senate leader Phil Berger to get third graders up to speed to their corresponding reading level. Educators consider the metric a key barometer of young students' ability to achieve success for the remainder of their K-12 experience and beyond.

The Excellent Public Schools Act aims to improve the Read to Achieve program that Berger championed several years ago. The program began in 2013 after lawmakers approved a 2012 bill. Early-grade students struggling with reading will receive individualized improvement plans under the new law.

Berger thanked Cooper for signing the bill that had passed the Legislature with support from all but five House Democrats.

“We have a shared priority of ensuring our students are proficient in reading by the end of the third grade, and I believe this will move us closer to that goal,” Berger wrote in a news release. "All of our students, but especially those who are struggling to read, will benefit from the improved literacy instruction and interventions.”

Cooper signed a third bill on Friday to expand in-state tuition eligibility for dependents whose parents were reassigned to another military location. The proposal also secured unanimous support in the legislature.

“North Carolina is the most military friendly state in the country and this legislation helps children of servicemembers stay in schools here with continued in-state financial assistance even if their parents are moved out of state by military order,” Cooper said.