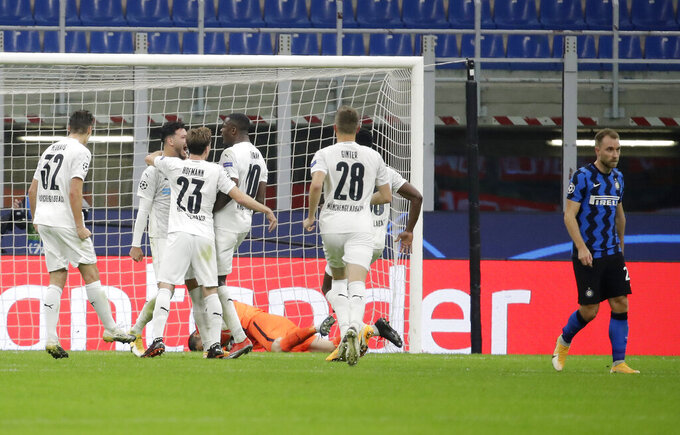 Moenchengladbach's Ramy Bensebaini, second from left, celebrates with his teammates after scoring his side's opening goal during the Champions League group B soccer match between Inter Milan and Borussia Moenchangladbach at the San Siro stadium in Milan, Italy, Wednesday, Oct. 21, 2020. (AP Photo/Luca Bruno) 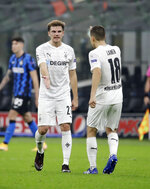 MILAN (AP) — Romelu Lukaku scored a late equalizer with his second goal of the game to give a coronavirus-affected Inter Milan a 2-2 draw against Borussia Mönchengladbach in their Champions League opener on Wednesday.

Ramy Bensebaini converted a penalty for Gladbach and Jonas Hofmann also scored for the German side before Lukaku's last-minute equalizer.

It was another negative note for Inter, which lost 2-1 against AC Milan in the city derby on Saturday.

“For me today’s result isn’t a good one, we could have done more but we have to continue to work and be mentally strong,” Lukaku said. “For us it isn’t an easy period ... We have to be stronger and we have to do better in defense too. We conceded two goals on our own mistakes, we missed a lot of chances. In matches like today’s, you pay for that.”

In the other Group B match, Real Madrid fell to a surprising 3-2 loss at home to Shakhtar Donetsk.

In Milan, it was the first match between the former heavyweights in more than 40 years. The German side overcame Inter on its way to winning the UEFA Cup in 1979.

The Inter squad had been hard hit by the coronavirus. Full back Achraf Hakimi tested positive for COVID-19 on Wednesday. Teammates Ashley Young, Milan Škriniar, Roberto Gagliardini and Ionut Radu were also out with the virus but Alessandro Bastoni and Radja Nainggolan had tested negative and were on the bench.

Lukaku almost gave Inter the lead shortly before halftime but he fired narrowly wide of the left post.

The Belgium forward did break the deadlock four minutes into the second half. Matteo Darmian’s shot was blocked and fell into the path of Lukaku, who rifled it into the back of the net.

Lukaku has now scored in nine successive European matches after he propelled Inter to the Europa League final last season.

However, Gladbach leveled shortly after the hour when Arturo Vidal tripped Marcus Thuram in the penalty area and the referee awarded a spot kick after reviewing the incident on the pitchside monitor.

Bensebaini fired the penalty into the bottom right corner.

Instead it was Gladbach which went in front two minutes later as Florian Neuhaus threaded a throughball to release Hofmann one-on-one with Samir Handanović, and the midfielder scored between the goalkeeper’s legs.

There was a lengthy VAR check for a possible offside before the goal was awarded.

Inter fought back in the final minute as Bastoni headed on a corner from the right and Lukaku prodded in at the far post.

“Without a doubt there are a lot of mixed emotions,” Gladbach's Hofmann said. “It took a long time before we truly believed we could win here.

“I think before the game, not everyone thought we could take something home with us. And now we’re disappointed by the point we’ve won.”