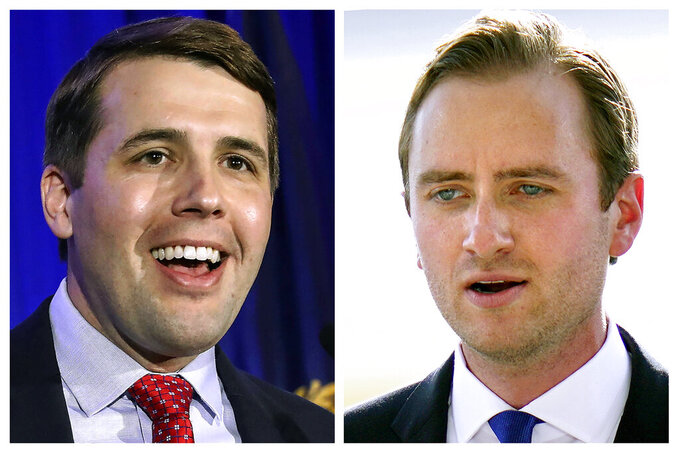 Democratic U.S. Rep. Chris Pappas and his Republican challenger Matt Mowers may have wanted to spend the campaign talking about health care, taxes and immigration.

But like so many races this year, the coronavirus and President Donald Trump’s response to it has dominated their discussions in the 1st Congressional District.

Pappas has been a harsh critic of Trump, accusing him of disregarding the science, politicizing mask wearing and falling short on testing. He also supported a massive coronavirus relief bill that passed the House and would provide relief to small businesses, state and local governments and residents who lost jobs due to the pandemic.

“This is a moment of tremendous national crisis," Pappas, who grew up in New Hampshire and whose family runs a popular restaurant, said during one debate. He added that constituents are afraid of losing their jobs, health care and loved ones and that people need to "come together in this all hands on deck moment.”

Mowers, who has been endorsed by Trump and was an official in Trump’s State Department, said he has taken the virus seriously from the beginning. But in two debates, he didn’t criticize Trump and praised the administration’s decision to restrict travel from China. He did, however, criticize the Centers for Disease Control and Prevention on its handling of testing and disagreed with the Federal Emergency Management Agency decision not to reimburse schools for protective equipment.

He also chastised Pappas for failing to get a new relief package approved, suggesting this showed the congressman was beholden to House Speaker Nancy Pelosi. Mowers said he would support a deal that expanded the Treasury Department’s Paycheck Protection Program and reimbursed state and local governments for coronavirus-related expenses.

Negotiations between Democrats and the White House over the size of a relief package are ongoing but a deal before the election is looking increasingly unlikely.

“Obviously we need to tackle the health challenges surrounding Covid but folks are ready to get back to work in a safe way,” said Mowers in an interview Monday with The Associated Press.

On a range of issues, voters in the district that includes the eastern half of the state have a stark choice.

The 40-year-old Pappas, who made history in 2018 by becoming the state's first openly gay member of Congress, wants to protect and expand the Affordable Care Act, would support increased investment in renewable energy to combat climate change and has criticized 2017′s $1.5 trillion tax overhaul. He supports abortion rights, while Mowers is anti-abortion.

Mowers, a political newcomer who ran former New Jersey Gov. Chris Christie’s 2016 presidential primary campaign in New Hampshire and moved back to the state last year, has accused Pappas of wanting to short-circuit the economic recovery by supporting tax increases. He also criticized Pappas over ending qualified immunity, which he said "would allow criminals to launch frivolous lawsuits against our cops.”

Mowers promised to fight illegal immigration, defend the Second Amendment and address climate change by targeting global polluters like China. On health care, Mowers said he would repeal and replace the Affordable Care Act. He has has vowed to protect preexisting conditions and support measures aimed at expanding access to health insurance.

With a week remaining in the race, the contest has gotten more personal and, at times, nasty.

Pappas has accused Mowers of doing the bidding of big pharmaceutical companies, pointing out that his financial disclosure showed he did work for two drug companies. Mowers said that his work was being mischaracterized by Pappas, saying it related to finding ways to “expand access to HIV AIDS treatment for low income patients" and investment and research into therapies for post-traumatic stress.

Mowers has taken aim at Pappas for dating someone who lobbied for Amazon, suggesting it raised “serious ethical questions." Pappas countered that his boyfriend stopped lobbying for Amazon last year and that none of the legislation he voted on benefited the company in particular.

Mowers backtracked in an interview Monday, saying he understands how many people would find the flag racist and that it “shouldn't be flown over state capitals.”