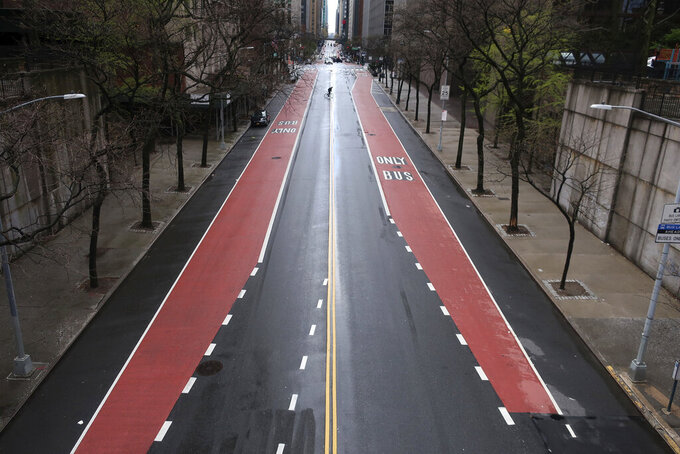 A once busy stretch of 42nd Street in Manhattan has very little traffic during the coronavirus pandemic on Tuesday, April 21, 2020 in New York. (AP Photo/Ted Shaffrey) 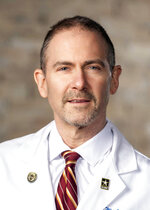 WASHINGTON (AP) — What if the real “invisible enemy” is the enemy from within — America's very institutions?

When the coronavirus pandemic came from distant lands to the United States, it was met with cascading failures and incompetencies by a system that exists to prepare, protect, prevent and cut citizens a check in a national crisis.

The molecular menace posed by the new coronavirus has shaken the conceit of “American exceptionalism” like nothing big enough to see with your own eyes.

A nation with unmatched power, brazen ambition and aspirations through the arc of history to be humanity’s “shining city upon a hill” cannot come up with enough simple cotton swabs despite the wartime manufacturing and supply powers assumed by President Donald Trump.

The crisis turned doctors in the iconic American shining city, New York, into beggars with hands outstretched for ponchos because they couldn’t get proper medical gowns. “Rain ponchos!” laments tech entrepreneur Marc Andreessen. “In 2020! In America!”

It’s turned a Massachusetts hospital executive into an under-the-radar road warrior, working up a deal through a friend of a friend of an employee who heard about a warehouse more than five hours away with masks. Two tractor-trailers disguised as grocery trucks picked them up, dodged interference from Homeland Security and took separate routes back in case one load got intercepted on highways through the northeast “pandemic alley.”

“Did I foresee, as a health system leader working in a rich, highly developed country with state-of-the-art science and technology and incredible talent, that my organization would ever be faced with such a set of circumstances?” asked Dr. Andrew W. Artenstein of Baystate Health, who was on hand at the warehouse to help score the booty. “Of course not.”

But, he said, “the cavalry does not appear to be coming.”

At the time of greatest need, the country with the world’s most expensive health care system doesn’t want you using it if you’re sick but not sick enough or not sick the right way.

The patchwork private-public health care system consumes 17% of the economy, unparalleled globally. But it wants you to stay home with your COVID-19 unless you are among the minority at risk of death from suffocation or complications. It wants you to heal from anything you can without a doctor’s touch and put off surgeries of all kinds if they can wait.

In the pandemic’s viral madhouse, the United States possesses jewels of medical exceptionalism that have long been the envy of the world, like the federal Centers for Disease Control and Prevention and the National Institutes of Health.

But where are the results?

For effective diagnostic testing, crucial in an infectious outbreak, look abroad. To the United Arab Emirates, or Germany, or New Zealand, which jumped to test the masses before many were known to be sick.

Or to South Korean exceptionalism, tapped by Maryland’s Republican governor, Larry Hogan, who accepted a planeload of 500,000 testing kits from Seoul to make up for the U.S. shortfall. The aid was dubbed Operation Enduring Friendship and annoyed Trump, the “America First” president.

“This monumental failure of institutional effectiveness will reverberate for the rest of the decade,” Andreessen, a tech investor best known for the Netscape browser in the 1990s, said in his company newsletter.

Yet Trump uses his daily White House briefings to claim success and talk about his poll numbers, TV ratings, favorite theories about science and the praise he gets from governors, who may be at risk of seeing their states intentionally shortchanged by Washington if they don’t say something nice about him.

“A lot of people love Trump, right?” Trump asked himself at the briefing Monday.

Connecticut Gov. Ned Lamont, a Democrat, found something nice to say about the administration this past week: It’s relaxing some regulations. “They’ve now said you can come up with your own swab,” he said. “One good thing is, the federal government is getting out of the way.”

That is one iteration of American exceptionalism now — a national government responding to a national crisis by getting out of the way.

That's what plunged Dr. Artenstein into his great mask caper.

If the Strategic National Stockpile has been of any benefit to Baystate Health in western Massachusetts, Artenstein, the organization’s chief physician executive, is not aware of it.

The backup emergency medical supply worked in 2015, speeding 50 doses of botulinum antitoxin to Ohio when people ate bad potatoes at a church potluck. One person died, dozens got sick, but botulism was nipped in the bud. But in today’s pandemic, the stockpile drained before the peak.

Artenstein and his team were drawn into what seemed like a zero-sum game to keep their doctors, nurses and staff protected with the most basic gear. Purchases have been known to fall apart at every stage of a transaction over the past six weeks, he said, at times because the federal government has apparently outbid his team for supplies.

So when Baystate Health learned about a large shipment of three-ply face masks and N95 respirators in the mid-Atlantic region, it was time for a road trip. Baystate Health was using up to 2,000 disposable masks a day and within several days of running out.

Two disguised trucks headed south, several members of a supply team flew down and Artenstein decided he’d best go, too, in his car. “It was felt by all that a little executive muscle might help in this situation,” he told The Associated Press, expanding on his account in The New England Journal of Medicine.

Baystate Health was paying five times the normal rate for the masks and found out that only one-quarter of the original order would be available. But the team converged at the distant warehouse and verified that the masks were good.

Then two FBI agents, on the lookout for illegal reselling, flashed their badges and began asking questions. “They were doing their job,” Artenstein said, “and that was fine with me because we were doing our job.”

But passing muster with the FBI was not the last hurdle. Homeland Security, the agents said, was considering whether masks in the shipment should be allocated elsewhere. “They had to hoist it up the chain,” he said of the agents. “The wheels turn slowly.” That took hours. “I really was nervous the whole time.”

Driving back on his own with the shipment still in limbo, Artenstein got on the phone to “try to thaw this frozen structure a little bit.” Baystate Health’s CEO contacted Rep. Richard Neal of Massachusetts, chairman of a powerful House committee, who got on the case. The shipment was eventually cleared, and the trucks set off through the Northeast Corridor.

Artenstein got the call around midnight that the masks were coming off the trucks and into hospital inventory.

With that, the acute mask shortage was resolved. But when Artenstein spoke with the AP, Baystate Health was two days from running out of disposable gowns.

Public institutions are measured by their foresight as well as by their response. Why didn’t you see this coming? they get asked when things go wrong — when terrorists strike, hurricanes flood a city, a pandemic arrives.

The United States saw this coming 15 years ago and still wasn’t prepared.

“If a pandemic strikes, our country must have a surge capacity in place that will allow us to bring a new vaccine online quickly and manufacture enough to immunize every American against the pandemic strain,” President George W. Bush said in a call for readiness in 2005.

The principal goal was “the capacity for every American to have a vaccine in the case of a pandemic, no matter what the virus is,” said Michael Leavitt, then the health and human services secretary.

Bush announced billions of dollars for a wide-ranging plan for a pandemic like this one. It accelerated a new method of vaccine research, beefed up stockpiles and steered aid to states to build mobile hospitals and more.

Many of the needs of today were anticipated in a mix of federal and state plans. Children would be schooled remotely — TV was the medium of choice then. People would need ready access to advice about whether to leave home quarantine to seek care — in Texas, the plan was to have retired doctors staff phone banks for that purpose. If 911 dispatchers got sick, librarians would step in.

But for all the creativity and ambition, a year later almost half the states had not spent any of their own money for the preparedness subsidized by Washington, and in the years that followed — through the Great Recession, more war, more time passing — the federal effort languished, too.

“Our country has been given fair warning of this danger,” Bush said at the launch, recalling the lethal 1918 pandemic and bird flu outbreak then spreading overseas. Americans have “time to prepare.”

But foresight became a thing of the past. And to hear Trump, it’s as if it never existed.

“Unforeseen problem,” Trump says of the pandemic. “Came out of nowhere.”

“This is something,” he said, “that you can never really think is going to happen.”