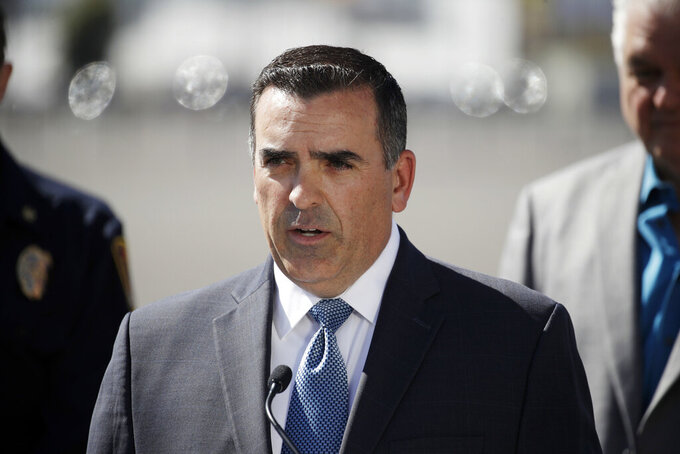 FILE - In this Oct. 5, 2017, file photo, Clark County Coroner John Fudenberg updates the media on the status of the work his bureau is handling in the wake of a mass shooting in Las Vegas. Fudenberg, whose work during three decades of government service included leading his office's efforts in recovering and identifying the victims of the Las Vegas mass shooting in 2017, is stepping down. “It’s been an amazing journey,” Fudenberg said, after taking a voluntary retirement, effective Aug. 7, 2020. (AP Photo/John Locher, File)

LAS VEGAS (AP) — The Las Vegas public official who led the identification of victims after the deadliest mass shooting in modern U.S. history is retiring after nearly three decades of government service.

Clark County Coroner John Fudenberg’s work heading the office handling notifications, autopsies and investigations after 58 people were killed at an outdoor music festival in October 2017 drew praise from Nevada Gov. Steve Sisolak for his “deep sense of professionalism and compassion."

Sisolak was Clark County Commission chairman at the time, and fielded media questions with Fudenberg and Sheriff Joe Lombardo, the head of the Las Vegas Metropolitan Police Department. Kirkpatrick was a member of the commission, which has jurisdiction over the Las Vegas Strip.

Fudenberg’s staff of about 100 reached next-of-kin and conducted autopsies of victims from Nevada, California, 13 other U.S. states and Canada. They determined all 58 died of gunshots.

Another 413 people were wounded by gunfire and police say more than 450 more were injured fleeing bullets rained rapid-fire from upper-floor windows of a high-rise casino on the Las Vegas Strip. The shooter killed himself before police reached him.

Police and the FBI found the gunman, a 64-year-old former accountant and high-stakes video poker player, had amassed an arsenal of military-style weapons and meticulously planned the attack. They theorized he may have sought notoriety, but said they never found a clear motive for the carnage.

“It’s been an amazing journey,” Fudenberg, 51, told the Sun after announcing he would take a county voluntary retirement offer. His last day is Aug. 7, and he said he looked forward to driving with his daughter to her college this fall.

Fudenberg began his career in government in 1991 as a corrections officer in Las Vegas. He became a Las Vegas city marshal before his predecessor as coroner, Mike Murphy, recruited him in 2003 as No. 2-ranking administrator in the medical examiner’s office. Fudenberg was named coroner when Murphy retired in 2015.

A county spokesman told the Las Vegas Review-Journal that Fudenberg was among about 420 employees to take voluntary retirement as a cost-saving measure due to budget issues from the coronavirus pandemic.

“We call ourselves the last of the first responders,” Fudenberg told the Review-Journal in 2018. “When the police are done securing the scene, when the firefighters and hospitals are done saving who they can, we’re just getting started.”

He recalled food still cooking on grills, cellphones scattered and a breeze blowing empty plastic cups past overturned chairs on the artificial grass of the shooting site, where a crowd of 22,000 had been attending the Route 91 Harvest Festival.

“It’s like everyone vanished suddenly,” he told a 2018 panel discussion.

The Review-Journal pointed to a years-long public records legal battle between the county, representing Fudenberg’s office, and the newspaper over the release of coroner’s autopsies.

The Nevada Supreme Court in February ruled that the autopsies are public records, although the coroner could withhold some “sensitive, private information.”

Fudenberg declined to talk with the Review-Journal about the legal battle, saying he preferred “to just keep it positive.”

The Clark County coroner’s office is a “good spot with good people there,” he told the Sun. “They’re going to do great.”