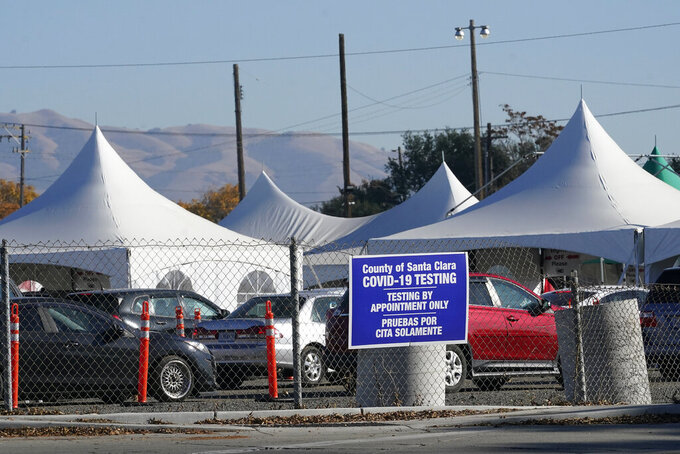 FILE - In this Dec. 1, 2020, file photo, cars line up at a County of Santa Clara COVID-19 testing site during the coronavirus pandemic in San Jose, Calif. Santa Clara County will not participate in Gov. Gavin Newsom's plan to have Blue Shield control COVID-19 vaccine distribution in California. County Executive Jeff Smith said Monday, March 8, 2021, that the county will not sign a contract with the health insurance company because it would not improve speed or efficiency, The Mercury News reported. (AP Photo/Jeff Chiu, File)

SAN FRANCISCO (AP) — More counties in California are reopening to business as coronavirus infection rates fall, but angst remains over the governor's plan to centralize the vaccine delivery system. The largest county in the San Francisco Bay Area now says it won't participate in it.

Eected officials are also pushing Gov. Gavin Newsom to reconsider another reopening plan he announced last week, one that ties equity metrics to the economy. The governor pledged to send more doses to vulnerable neighborhoods, but critics say the ZIP codes he wants to use do not capture all the pockets of poverty in the state.

But significant questions remain over Newsom's initiatives, including what happens if counties don't participate in the new statewide system administered by insurer Blue Shield. The governor tapped the insurance company to create uniform rules and increase the rate of vaccinations, especially in hard-hit communities, through a centralized online portal.

County officials say they don’t have enough details and the number of changes are confusing.

In Santa Clara, County Executive Dr. Jeff Smith said late Monday that his county won't sign a contract with Blue Shield because it would not improve speed or efficiency.

The county has been distributing COVID-19 vaccines from the start, ensuring equitable outreach to socially disadvantaged communities, including farmworkers, the county said in a statement to The Associated Press. The county noted that its allocations have decreased recently and are expected to drop further.

Smith told a Tuesday meeting of the county’s Board of Supervisors that the contract would not bring in more doses, while adding “another layer of administration” that could delay getting residents getting vaccinated.

“It eliminates local control,” Smith told the supervisors. “It would put statewide priorities over local needs.”

The state's switch to a vaccine appointment and delivery system administered by Blue Shield was expected to be completed by March 31. So far, only Kern County has signed a contract with Blue Shield. Orange County's Board of Supervisors won't even consider signing the contract for another two weeks. San Bernardino said it's still examining contract details.

Los Angeles County said Tuesday it has not signed the contract but will work with Blue Shield and the state “to design a partnership that strengthens the existing vast and diverse network of vaccination providers."

Marin County's health officer, Dr. Matt Willis, told county supervisors he is “not super eager” to switch over to the state's My Turn scheduling system because Marin's is more precise in reaching specific residents.

The California Department of Public Health did not respond to questions about what would happen if Santa Clara does not join the system. In a statement, the department said dozens of providers at more than 1,000 vaccination sites have signed on.

Among them are about 40 federally qualified health centers, 28 hospitals, four large medical groups, three pharmacies and three tribal clinics, according to Blue Shield.

“Our goal is to save lives by helping to provide all Californians equitable access to the vaccines, especially in those communities hardest hit by the pandemic,” Blue Shield spokesperson Matthew Yi said in a statement.

The San Francisco Bay Area counties of Santa Cruz, Alameda and Solano are among 20 counties where spread remains “substantial” but not widespread. Improving metrics could mean that heavily populated counties in the south, including Los Angeles and Orange, also will be allowed to resume indoor dining and gym workouts at reduced capacity soon.

LA County’s public health director, Dr. Barbara Ferrer, said Tuesday that LA may even hit the red tier as soon as this weekend under the equity initiative announced by Newsom last week.

His plan to set aside 40% of vaccine to people living in more than 400 vulnerable ZIP codes allows counties to exit the state's most restrictive tier once 2 million people in those neighborhoods receive at least one dose of the vaccine. The state could hit the milestone this week.

Most of the ZIP codes are in Southern and central California, with only 2% of Bay Area residents living in the affected ZIP codes, and lawmakers want him to consider other metrics, such as census tracts.