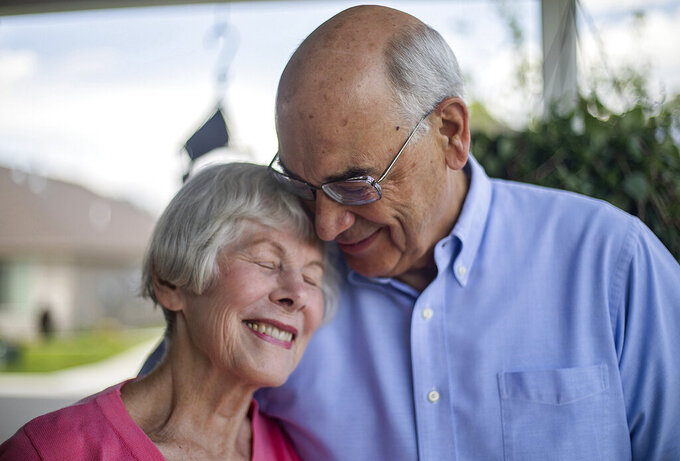 Newlyweds Ann Marcusen Bell and Enoch Bell pose for a portrait on Monday, May 11, 2020, in Kaysville, Utah. Due to COVID-19 social distancing restrictions, the couple was married in their living room while guests and the presider were present via Zoom video chat. (Ben Dorger/Standard-Examiner via AP)

KAYSVILLE, Utah (AP) — With all the bad press COVID-19 has gotten, it only seems fair to point out when something good comes of the pandemic.

Our story begins back in early December, when 76-year-old Enoch Bell called up 83-year-old Ann Marcusen to ask her out on a date. The two Kaysville residents had lost their spouses within the last few years — Enoch after a 50-year marriage, and Ann after nearly 60.

“It was a blind date,” Enoch said. “A mutual friend thought we should meet each other, so she gave me Ann’s phone number and I called her up.”

“He said, ‘Hello, this is Enoch Bell. Kenny Barnes said I should call you and that I might want to marry you,’” Ann recalls, adding dryly: “I told him we’d see how it goes.”

Holly Wright, one of Ann’s nine children, said the entire family had a good laugh about the way Enoch brought up marriage at that initial phone call.

“Enoch said, ‘You have to forgive me, I haven’t dated in about 50 years,’” said Wright, who now lives in unincorporated Weber County near South Ogden. “And my mom said, ‘I haven’t either. We’ll stumble through this together.’”

For her part, Cupid-wannabe and Kaysville resident Kenny Barnes swears it’s the first and only time she’s ever acted as a matchmaker — although she and her husband of 28 years had a similar introduction three decades ago.

Barnes and Ann work together on Thursdays in the Bountiful Temple for The Church of Jesus Christ of Latter-day Saints. One day back in November, the two women were talking — it had been a few years since Ann’s husband had died — and Barnes asked Ann, “Have you ever thought you would want to date or get married again?”

Barnes says most people of a certain age would just say, “Are you kidding me?” But Ann got a little grin on her face and said, “Yeah, I think that would be fun.”

The following Sunday, Barnes was sitting in church behind Enoch when the inspiration hit her.

“I thought, ‘Oh my gosh, those two need to be together,’” Barnes said.

That next Thursday at the temple, she ran the idea past Ann, and Ann wrote down her phone number to pass along to Enoch.

Once the two started dating, Barnes says it was cute to see Ann’s excitement.

“She’d come to the temple and say to me, ‘Oh, I just really like him; I hope he likes me,’” Barnes said of her 83-year-old friend. “It was just like high school all over again.”

The couple’s first date was Dec. 9, a Monday. Enoch took Ann to a Christmas party for singles who get together once a month.

So then, was it love at first sight for the two?

“For me, it was like at first sight — I wanted to go out with him again,” Ann said.

“I thought she was beautiful,” Enoch adds. “I was impressed.”

Date No. 2 came later that week, at the Tabernacle Choir Christmas Concert in Salt Lake City. After that, the cat was pretty much out of the bag.

“My neighbors were in the balcony at the concert, and were watching us,” Ann said. “So they told on me to the other neighbors.”

Wright said she and her sisters got the news that their mother was now in the dating pool at a birthday lunch for Wright in December. Usually at these gatherings, the daughters talk excitedly between themselves while mom listens quietly, “watching from face to face like a tennis match,” Ann quips.

But this time, their mother told her daughters that she had something to tell them.

Recalls Wright: “Mom got a quiver in her lip — she never gets nervous — and said, ‘I have some news. I went on a date.’”

Adds Ann: “I said I’m dating someone and the whole conversation stopped. It was complete silence.”

Wright confesses the idea of her mother dating again was a bit strange.

For Wright, that change of heart came when she met Enoch and realized what a genuinely nice person he was.

“I guess I’ll call him dad,” Wright laughed. “He’s a sweet man. My own dad was one of the kindest, most gentle people you ever met, and when I met Enoch, he was just as nice and sweet.

“And they seem so happy,” she added.

Ann and Enoch went on a third date after that, but then came a three-week lull.

“I figured it was over, and that it was just a nice experience,” Ann said.

But then the pair had a few chance meetings, which led to them starting to see each other three times a week — including weekly in the Bountiful LDS temple, where they both volunteer their time.

“I have to tell you, every date we had was comfortable, as if I’d known him for a long time,” Ann said.

Ann calls Enoch even-tempered, not a showoff, a man of few words who isn’t impressed with himself, kind and gentle, and very respectful of people.

Enoch says Ann is intelligent, witty and smart. She knows French and English, and was an English teacher, so “she teaches me.”

Ann didn’t think she’d ever get married again. Enoch, on the other hand, says he was just following orders.

Both say they like to think their deceased spouses had a hand in getting them together.

Ann begs to differ. She thought it was quite special. She’d worked in the temple that day, and remembers that filet mignon had been on the cafeteria menu. She bought two dinners to bring home that night.

“I had decided to say ‘yes’ about a month before that, if it ever happened,” she admits.

Wright says she got the news about her mother’s engagement via text message the next day.

“I got a text from my mom,” she remembers, “that said, ‘A funny thing happened last night. Enoch asked me to marry him. And I said yes.’”

The original date for the wedding was set for May 9 at Farmington Station. Then, the coronavirus came along, and little by little the wedding plans changed.

The ceremony was performed on the afternoon of April 24, by Ann’s former bishop and current LDS stake president, Jeff Taylor.

Taylor, who presides over the Kaysville South Stake, had known both Ann and Enoch before their spouses passed away. So when he got a text from Enoch asking if he’d perform the ceremony, he was pleasantly surprised.

“I had no clue that they were dating,” Taylor said. “I was shocked and happy, because both are such great people. They were two wonderful couples prior to that, and obviously with both spouses passing away it was incredibly sad. So for Ann and Enoch to find each other is wonderful.”

Taylor admits that, as the wedding officiant, it was daunting to attempt to give the couple any sort of wisdom or advice.

“When Enoch asked for words of counsel, my comment was, ‘You two can give me more counsel than I can give you,’” Taylor said.

“So my counsel was to keep doing what you’re doing,” Taylor said. “Ann, keep teaching, Enoch keep serving, and you’ll have a wonderful life.”

Initially, it was just going to be Ann, Enoch and Taylor at the ceremony. But then, similar to the way in which the wedding got smaller and smaller, the wedding party suddenly began growing larger. At first, Ann wanted at least one daughter at the ceremony to take photographs. Then, she realized she needed another daughter there to be a witness. Eventually, Ann said she wanted all of her daughters there.

At first, these last-minute wedding guests were going to wear masks and just “peek through the window,” Wright said. But they couldn’t really hear, so they ended up standing at the back of the room, careful not to touch anything.

“And we gave a lot of air hugs,” Wright said.

Another 50 people — mostly relatives from across the country — participated virtually through a teleconference of the ceremony.

Neighbors had requested that, following the ceremony, the newlyweds walk around the block so they could all stand on their porches and wish them well. Thus, Ann and Enoch — trailed by their socially-distanced daughters walking behind and holding bells — strolled the neighborhood while folks waved and rang their own bells in a tribute to the new Mr. and Mrs. Bell.

Following their walkabout, Ann and Enoch stood on the sidewalk in front of their home while other community members had a sort of drive-by reception/parade.

The couple will live in Ann’s Kaysville home; she’ll go by the name Ann Marcusen Bell.

Wright didn’t expect her mother’s wedding in the time of coronavirus to be such a beautiful event. But the way the two lovebirds pulled it off, it was a lot nicer than she had hoped.

Wright says it reminded her of the Whoville Whos from “How the Grinch Stole Christmas.”

“Although the Grinch tried to steal Christmas, the Whos still celebrated,” Wright said. “My mom and Enoch are like the Whos — they just enjoyed life to the fullest during that wedding celebration, in spite of the quarantine COVID thing going on.

“It was just some good, happy news in the middle of all this craziness.”

Which brings us full circle to the silver lining in this COVID-19 madness. Ann believes that the pandemic actually helped the couple’s love blossom.

“The coronavirus has been our friend,” she insists. “It made it so we can spend more time together to get to know one another.”

Indeed, between their busy lives — family, church callings, temple work and other service — they wouldn’t have been able to see each other as much.

“I just don’t know if we could have gotten to know each other so well if not for coronavirus,” Ann concludes.