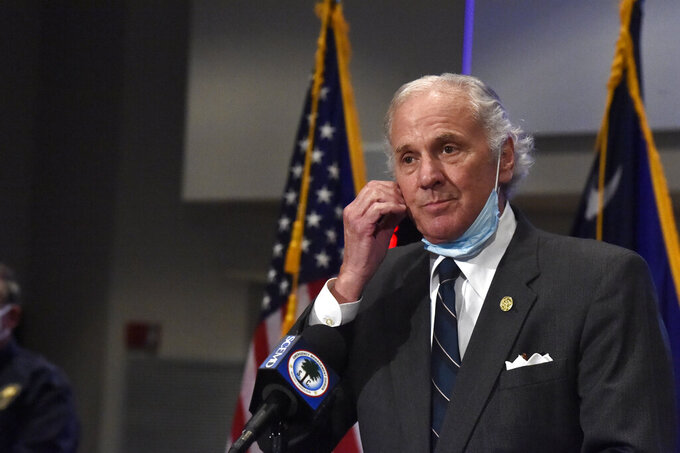 South Carolina Gov. Henry McMaster removes his mask while speaking during a COVID-19 briefing on Wednesday, July 29, 2020, in West Columbia, S.C. As of Monday, McMaster says all businesses will be allowed to be open, as long as they adhere to social distancing and capacity limits. (AP Photo/Meg Kinnard)

The unanimous decision by the state Supreme Court says the governor's decision to use money from the coronavirus rescue package in this way “constitutes the use of public funds for the direct benefit of private educational institutions within the meaning of, and prohibited by” the South Carolina Constitution.

McMaster unveiled his plan for Safe Access to Flexible Education in July, effectively creating a one-time voucher program for parents who couldn’t otherwise afford the expense of private school. The plan was immediately challenged in court.

Saying he wanted to give more families the option to send their children to private schools -- especially if their own schools would not reopen for in-person instruction because of the pandemic -- McMaster said during an event at a religious school in Greenville that the program would cover about 5,000 SAFE grants of up to $6,500 each for students to attend private schools this academic year.

The governor had called on all the state's schools to reopen classrooms five days a week, but many instead opted for virtual instruction or a combination of face-to-face and remote learning.

The money flows from the federal relief package passed by Congress early in the pandemic that allocated more than $48 million to the Governor’s Emergency Education Relief fund, to be spent at McMaster's discretion. McMaster decided that two-thirds of this money should support private schooling.

McMaster, a former state and federal prosecutor, who previously called the program “perfectly legal,” said Wednesday he was “disappointed for the 5,000 or so students from working and low-income families who will be denied any financial aid."

The governor also said that, because of the court's decision, independent and private colleges, including historically Black colleges and universities, would not be able to access federal relief dollars that the governor had allocated to them.

As for the $32 million, which must be spent before it expires Dec. 31, McMaster said the funding would go to “providing educational opportunities” but that details were still being worked out.

Wednesday's ruling was nearly identical to the high court's original rejection of the case in October, a decision justices agreed to reconsider at the request of McMaster, South Carolina’s private colleges and federal officials.

Attorneys for the state had said that torpedoing the plan would also put other established funding programs at risk, including higher education tuition grants, lottery scholarships and the South Carolina First Steps program.

Michelle Liu, a corps member for the Associated Press/Report for America Statehouse News Initiative, contributed to this report. Report for America is a nonprofit national service program that places journalists in local newsrooms to report on undercovered issues.