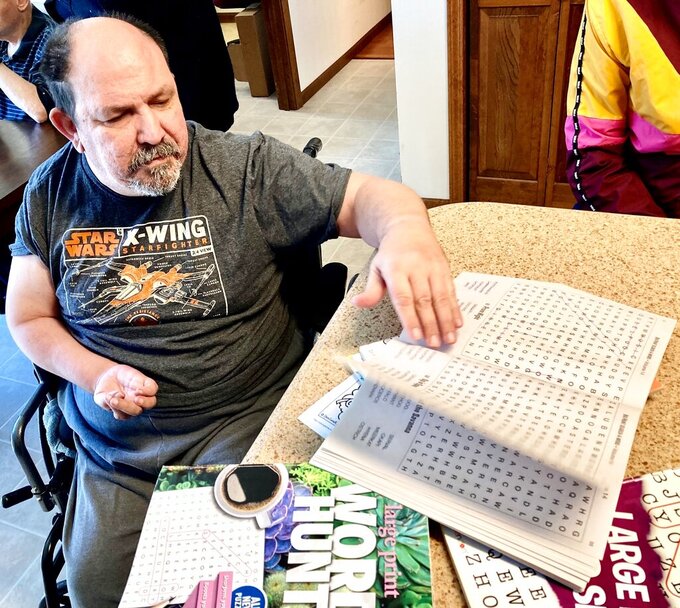 Mark S., shows some of the word search books he enjoys in this April 1, 2021 photo at his Springfield, Ill., group home operated by Sparc, an agency that assists people with intellectual and developmental disabilities. A state study prompted by a federal consent decree reports that it would cost the state $329 million this year alone to meet the 2011 court order's demands expanded community-based housing, training and the reduction of a list of 18,000 awaiting services. Sparc is prohibited by law from releasing full names of its residents. (AP Photo by John O'Connor)

SPRINGFIELD, Ill. (AP) — Illinois lawmakers are in the final weeks of their spring session, when they slice the fiscal pie amid a cacophony of cries from state-funded service providers. Few can lean on the kind of spending-boost argument that this year, advocates of the intellectually and developmentally disabled have: A federal judge said so.

Gov. J.B. Pritzker is responding. The Democrat has proposed an eye-popping $122 million increase to meet the dictates of a 2011 consent decree requiring more community-based services, such as neighborhood group homes of eight residents or fewer and more job opportunities for people with developmental disabilities. The case is known as Ligas v. Hamos.

The problem is, after the judge in the case admonished the state in 2017 for falling short, a painstaking study by Pritzker’s own Department of Human Services determined that meeting the court’s goals would cost $329 million this year alone, largely to hike salaries, which at current levels fuel turnover and create uncertainty for a system serving 28,000 while maintaining a waiting list of 18,000.

“Driving more funding into reducing the ever-growing waiting list is critical...,” said Sen. Sara Feigenholtz, a Chicago Democrat and chairwoman of the subcommittee on human services appropriations. “Ligas is a 10-year-old consent decree — it’s time to see some movement.”

This is a familiar state capital springtime tune: Costs of vital services invariably outstrip available tax revenue. Pritzker’s budget planning started with a $1.6 billion deficit and none of the $1.5 billion in new money he hoped would come from restructuring the state's income tax, which voters rejected.

It’s left multiple sectors wanting. This is the second consecutive year K-12 education could go without the $350 million annual increase that a 2017 funding overhaul deemed necessary. Another service bound by a federal consent decree, prison inmate health care, is short by 350 beds, testimony this month revealed. The state’s mayors are bucking Pritzker’s $152 million cut in tax-revenue sharing to pay for local police and fire services, street maintenance, sanitation and more.

Mindful of the funding bump but undaunted, advocates for the intellectually and developmentally disabled, or I/DD, community, press for more, highlighting the monetary gap between the governor’s proposed contribution, however generous, and the rates outlined in the Human Services Department's study.

“Now is the time,” said Josh Evans, president and CEO of IARF, an advocacy group for the community. “We recognize Illinois’ (financial) situation. But we have this study, we have support from Congress and we really have a legal, ethical and moral obligation, as well as a court consent decree to get going in this direction.”

Federal support is another chit supporters can redeem. Illinois expects $7.5 billion in COVID-19 pandemic relief. Washington has yet to set spending rules, so it's become a fanciful piggy bank for hat-holding state-funded groups.

But it has built-in financial assistance for the exact type of services offered by I/DD programs and outlined in the rate study. Between an existing pandemic-related boost in the federal Medicaid match and the one offered to I/DD services in the relief package, what's typically $51 in federal spending for every $100 spent by Illinois has been boosted to $67 for most of the fiscal year beginning July 1.

Spokesmen for the Department of Human Services did not respond to requests for comment on the Guidehouse study or the extra cash committed to its recommendations.

The study examined government reimbursement rates for salaries and services and delineated seven goals for meeting the 2017 court order's requirements for group-home housing, job training and other services, the crux of Ligas. The top two focus on salary, which the study determined should be 150% of minimum wage.

No one disputes the notion that better pay would slow turnover when consistency is critical to residents' success. Feigenholtz notes particularly the disparity between the salary made by private contractors' group-home staff and similar jobs in state government, alluring because they are more lucrative.

At Springfield-based Sparc, which operates dozens of group homes and day services, CEO Greg O'Connor does not hesitate to name his top priority should more money become available.

“The first thing we would do is pay staff better so that our turnover would be reduced,” O'Connor said. “We're blessed because turnover statewide is over 53%. We’re at, like, 40%. And 40% is pretty paralyzing.”