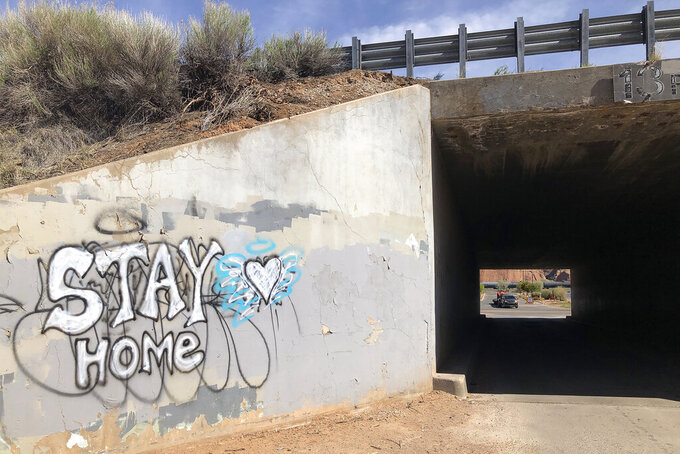 Graffiti urging people to stay home amid the coronavirus outbreak in the region is shown on a wall in Gallup, N.M., Thursday, May 7, 2020. The original lockdown came as a suprise to many Navajo Nation residents who depend on Gallup for supplies they can't access. New Mexico Gov. Michelle Lujan Grisham renewed the lockdown order amid concerns about the rapid transmission of COVID-19 in the area. Gallup and surrounding McKinley County are one of the worst rural hot spots for coronavirus infections in the U.S. (AP Photo/Morgan Lee)

SANTA FE, N.M. (AP) — The New Mexico Supreme Court on Tuesday unanimously upheld the governor's authority to fine businesses up to $5,000 a day for violating state emergency health orders aimed at slowing the spread of COVID-19.

The court heard arguments from a group of business owners who claimed the administration of Gov. Michelle Lujan Grisham overstepped its authority in imposing fines higher than $100 citations.

The five-member court ruled without dissent against the business owners who sued. Chief Justice Michael Vigil said the "Legislature has clearly given the governor that authority.”

The court did not make a decision on another claim that the restrictions in response to the pandemic may require government compensation for businesses.

Carter Harrison, an attorney for several business owners, contended that the health order violations could be sanctioned with fines of up to $100 and up to six months in jail.

But Matthew Garcia, a lawyer for the administration, said Lujan Grisham has the authority to impose steep fines.

“What we’re trying to get here is immediate compliance because the only tool we currently have to stem the transmission of COVID-19 is social distancing,” Garcia told the justices.

State officials have issued the $5,000 daily fines to 16 businesses amid a backlash against the public health orders affecting restaurants and other establishments.

Major steps toward reopening the economy have been delayed until at least the end of August amid a July surge in cases in New Mexico and the neighboring states of Arizona and Texas.

The seven-day rolling average of daily new cases in New Mexico has risen slightly over the past two weeks from 277 new cases a day to 282 new cases a day on Aug. 3, according to an analysis by The Associated Press of data collected by Johns Hopkins University Center for Systems Science and Engineering.

The average rate of positive tests has declined slightly over the past few weeks. Comparing seven-day averages of new cases smooths out anomalies in the data, including delays in test results.

Statewide virus related deaths increased Tuesday by three to 658, with confirmed infections increasing by 214 to 21,340.

The state Supreme Court plans to issue written guidance soon on the question of whether administrative sanctions against health order violations constitute a “taking” that warrants compensation.

The governor’s office says the outcomes of recent litigation in Illinois, Colorado, New York and California support its position that enforcement of its emergency health order does not require compensation.