Cousins steps back to forefront for Vikings with Cook slowed 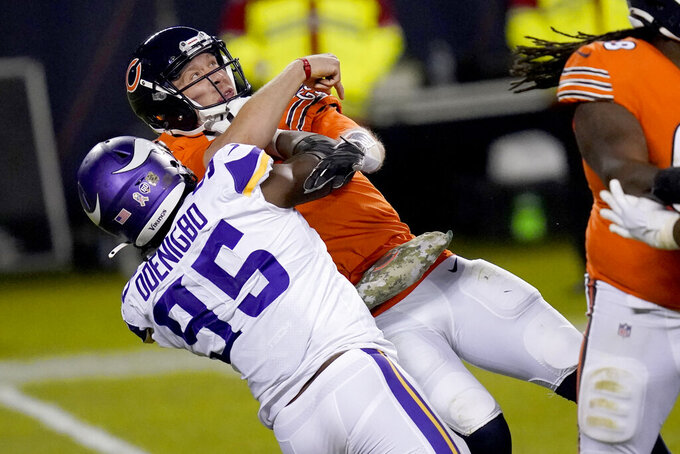 Chicago Bears quarterback Nick Foles tries to throw under pressure from Minnesota Vikings defensive end Ifeadi Odenigbo (95) during the second half of an NFL football game Monday, Nov. 16, 2020, in Chicago. Foles was injured on the play and left the game. (AP Photo/Charles Rex Arbogast)

MINNEAPOLIS (AP) — With league-leading production from running back Dalvin Cook and clever play-calling by offensive coordinator Gary Kubiak, the Minnesota Vikings helped Kirk Cousins get back in a groove this month after his rash of turnovers contributed to the team's 1-5 start.

Cousins wasn't going to be able to just linger in the background for long, though. Chicago's defense made that clear on Monday night, containing Cook with one of the best front-seven groups assembled in the NFL. Minnesota's hyper-scrutinized quarterback went to work, delivering a clutch performance that was about far more than simply managing a 19-13 victory over the Bears.

“I thought he played really fast, which is important for him. He was extremely accurate. He got the ball in the right places all night," Vikings coach Mike Zimmer said. “I just felt like he did a really good job of handling what the defense was giving us.”

Cook reached 96 rushing yards — he also had a modest 16 receiving yards — but needed 30 carries to get there. Most of those gains came after standout defensive tackle Akiem Hicks left the game with a hamstring injury.

Cousins completed 10 of 11 attempts on third downs for 149 yards and a perfect 158.3 passer rating and one sack. Two of those throws went for touchdowns to Adam Thielen and five more moved the chains for first downs.

“Gary deserves a lot of credit for sticking to the game planning. He had a plan all week long of how to attack them on third down,” said Cousins, whose only turnover was a second-quarter interception that slipped straight through Thielen's hands as Khalil Mack converged on the ball.

Cousins attempted a combined 34 passes while Cook ground up Green Bay and Detroit in victories over the previous two weeks. In defeating Chicago for the first time in three seasons with the Vikings (4-5), Cousins went 25 for 36 for 292 yards and just one sack. He took six sacks in a 16-6 loss at Soldier Field last year.

“It’s been nice to kind of figure ourselves out, find an identity as we play through things,” Cousins said. “So I like that part of it. Just like I said at the bye week when we had 10 games left, these 10 games are going to tell the story. Even after three wins, I’d still say the same going forward.”

Zimmer said last week he told his assistants on defense that they've been doing their best work as coaches this year, considering the pandemic-shortened preseason and the volume of rookies and other inexperienced players being thrust into regular roles.

The combination of pressure from the front four and the blitzes dialed up by Zimmer kept Bears quarterback Nick Foles on his heels all game and allowed the young cornerbacks to further progress. The Bears totaled two first downs and 32 yards on six drives in the second half.

“When you’re doing a good job stopping the run and you’re not always having to get a safety involved, it really opens up your whole play-calling sheet," safety Harrison Smith said.

Special teams coordinator Marwan Maalouf has undoubtedly been the most stressed member of the coaching staff this month. The struggles of his units reached a crescendo when Cordarrelle Patterson, the former Vikings return ace, took the second-half kickoff back 104 yards for a touchdown that triggered a sideline tantrum by Zimmer aimed at Maalouf.

Long snapper Austin Cutting sent back a grounder to holder Britton Colquitt in the fourth quarter, a botched extra point that could've been the difference in the game. About five minutes later, the Vikings allowed a 32-yard punt return to Anthony Miller.

Justin Jefferson is on pace to break Minnesota's rookie-season receiving records set by Randy Moss in 1998 for catches (69) and yards (1,313). Jefferson has 42 receptions for 762 yards and is fifth in the league with an average of 18.1 yards per catch.

Cutting couldn't practice this week due to COVID-19 prevention protocols. The second-year player was fuming at himself on the sideline after the botched extra point.

“Sometimes he's pretty good and sometimes he hasn’t been good lately, so we’ll keep working at it,” Zimmer said.

Tight end Irv Smith Jr. was missed both as a receiver and a blocker against the Bears, sidelined for the first time this year by a groin injury. Tyler Conklin had an elevated role in his absence, and Kyle Rudolph contributed four catches for 63 yards, both season highs, while frequently tasked with blocking Mack, the three-time All-Pro outside linebacker. Cornerback Cameron Dantzler missed his second straight game with a concussion.

The Vikings have allowed only seven plays of 20-plus yards over their three-game winning streak, according to Sportradar research. They allowed 29 of those big gains over the first six games, the third most in the NFL to that point.

The Vikings will be favored to win each their next three games, all at home against Dallas, Carolina and Jacksonville, teams with a combined 6-22 record. Holding serve would give them a fighting chance to make the playoffs entering the final quarter of the season, when daunting trips to Tampa Bay (7-3) on Dec. 13 and New Orleans (7-2) on Dec. 25 are juxtaposed with home games against Chicago (5-5) and Detroit (4-5).