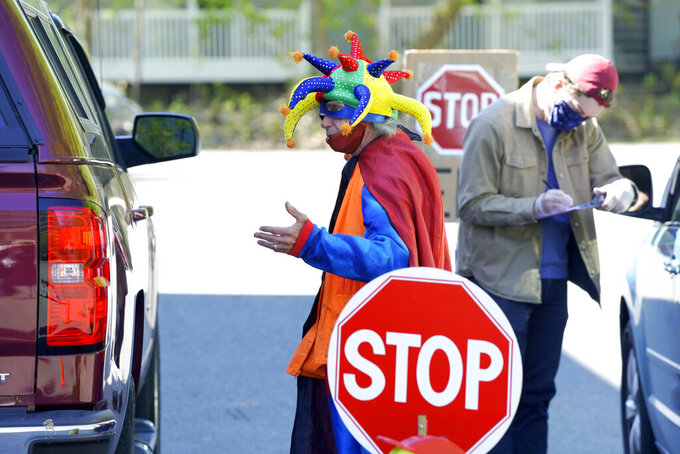 Joey Johnson, AKA Captain Corona, directs traffic at The South Congregational Church Food Pantry, Wednesday, May 20, 2020, in Pittsfield, Mass. The food pantry served about 500 families with pickups Wednesday and Thursday mornings and delivered boxes to others. Additionally, the pantry operates a kitchen that serves up to 100 people per meal to go. (Ben Garver/The Berkshire Eagle via AP)

BOSTON (AP) — The number of individuals in Massachusetts diagnosed with confirmed cases of COVID-19 surged past 90,000 on Thursday as the state reported more than 1,100 new cases.

The number of confirmed COVID-19-related deaths since the start of the pandemic climbed to more 6,148 as another 82 deaths were reported.

There were also continued signs of progress in the daily numbers, with the state reporting having conducted more than half a million tests since the pandemic’s start.

The number of people currently hospitalized with the disease fell to about 2,400 — down from more than 3,400 two weeks ago.

The number of COVID-19 patients in intensive care also fell to 647 — down from 852 two weeks ago.

The number of deaths at long-term care facilities stood at 3,755 — or about 61% of all COVID-19-related deaths in the state. Federal justice officials have been pressing states including

Massachusetts to reopen houses of worship as the country battles the spread of the coronavirus, Gov. Charlie Baker said Thursday.

Baker said his decision to shutter houses of worship during the state of emergency “was the right thing to do, but I hated doing it.” They have been allowed to restart services this week as long as they practice social distancing.

“The Department of Justice has made very clear to a number of states that peoples' ability to access church and practice their faith is a constitutional question that they are pushing people at the state level pretty hard on,” Baker told WGBH News. "I couldn’t ignore that.”

Baker declined to say whether he would support efforts by some in the state Legislature to mail ballots to every registered voter for the fall elections.

“I really haven’t spent any time thinking about it,” Baker said. “People think this is something that needs to happen soon? I mean the elections are a long way away.”

Baker also said he hopes coronavirus cheek swab or nasal swab tests that can be self-administered will be available this summer, which could help the state increase testing.

Baker said he and Lt. Gov. Karyn Polito have been tested once after they had “conversations at a distance” with Massachusetts Public Safety Secretary Thomas Turco who later tested positive for the virus. Baker said he and Polito both tested negative.

State officials blamed the problem on a data entry error.

More than 38,000 people filed an initial unemployment insurance claim in Massachusetts from May 10 to May 16 according to accurate numbers, officials said.

That’s a decrease of nearly 6,200 compared to the previous week. Since March 15, nearly 860,000 initial claims have been filed for unemployment insurance.

Initial claims for Pandemic Unemployment Assistance for the week ending May 16 were about 116,000. Since April 20, more than 371,000 individuals have filed for the insurance.

Boston has distributed nearly $4 million in grants to more than 1,100 small businesses across the city struggling because of the coronavirus pandemic.

The businesses receiving grants through the Small Business Relief Fund represent industries most-impacted by closures, policies, or general loss of revenues due to the pandemic, according to a statement Thursday from the office of Mayor Marty Walsh.

The new sites will utilize self-swab tests that won’t require people to leave their vehicles. No testing will be done in stores. The tests are done under the supervision of a CVS employee and results are usually available in three days. Preregistration is required.

The Rhode Island-based company plans to open 1,000 sites across the nation by the end of the month.

Boston is planning a virtual graduation ceremony for the approximately 3,000 students in its graduating class of 2020.

The ceremony will be broadcast June 13 from 7:30 to 8 p.m. on WCVB-TV and will be hosted by Mayor Marty Walsh and school Superintendent Brenda Cassellius with former United States Secretary of Education John King as the keynote speaker. It will also be streamed on WCVB’s website.

Valedictorians from all 36 city high schools will participate and students have also been asked to submit photos and videos of their high school experience.

Officials at MSPCA-Angell said the tortoise -- Ms. Jennifer -- is possibly the oldest animal ever to be offered for adoption.

A spokesman for the shelter said the tortoise is the 10th animal to be given to the shelter due to the pandemic.

Tortoises can live up to 100 years, Halpin said.