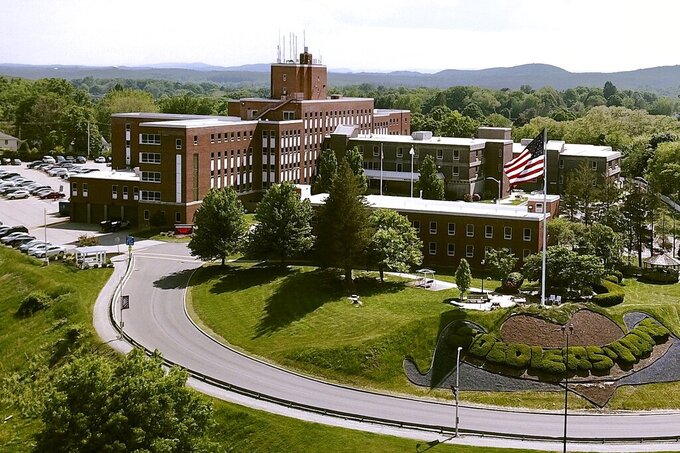 This May 2018 file photo shows an aerial view of the Holyoke Soldiers' Home in Holyoke, Mass. The superintendent of the veteran's home was removed from his duties Monday, March 30, 2020 after several residents died, including some who had tested positive for COVID-19 and others whose results are pending. The new coronavirus causes mild or moderate symptoms for most people, but for some, especially older adults and people with existing health problems, it can cause more severe illness or death. (Patrick Johnson/The Republican via AP)

BOSTON (AP) — COVID-19-related deaths in Massachusetts surged again Wednesday, topping 5,300 just days before the state is set to release a plan to reopen the economy.

There were 174 new deaths reported, bringing to 5,315 the total number of deaths recorded in the state since the pandemic’s start.

It’s a sharp increase compared to the 33 deaths reported Tuesday.

The total number of confirmed cases of COVID-19 in Massachusetts neared 80,500 after the state reported an additional 1,165 individuals who tested positive for the disease caused by the coronavirus.

The number of COVID-19 patients in intensive care dipped below 800, while there were about 3,100 people overall currently hospitalized with COVID-19.

Deaths at long-term care facilities stand at 3,236 — nearly 61% of all COVID-19-related deaths in the state.

Reopening the Massachusetts economy is going to be a gradual process, Gov. Charlie Baker said Wednesday, offering few specifics of the plan he’s preparing to release early next week.

“This isn’t going to be a situation or a circumstance where on May 18, every business in Massachusetts that is currently closed is going to be permitted to open,” Baker said at a press conference.

Massachusetts residents have gone through “a tremendous amount of dislocation and discomfort and lost wages” over the past 60 days to get to the point where the virus has been reduced enough to let some businesses reopen, Baker said.

“The last thing we’re going to do is reopen it in a way that fires that virus up again,” Bakers said. “I would love to be able to open everything up tomorrow. That would be an incredibly irresponsible thing to do.”

The first businesses to reopen are those that will be the most successful at not spreading the virus and don’t have a lot of direct contact with customers, he said.

Baker offered few other specifics, saying he wanted to wait until the plan is released on Monday.

Baker told reporters he's also having discussions with the K-12 community about reopening schools in September and about graduations plans. He said he would talk more about that on Monday.

A Massachusetts veterans home that's been the site of one of the worst coronavirus outbreaks in the nation will undergo a management overhaul and operate with fewer residents and new safety protocols, state officials said.

About $2 million in improvements are also being made to the Soldiers' Home in Holyoke to make it safer, Daniel Tsai, deputy secretary of the state Executive Office of Health and Human Services, said Tuesday.

“We have been in quite a bit of a gauntlet, but we are not in the clear,” Tsai told Masslive.com.

As of Wednesday, 74 residents of the long-term care facility for elderly and ill veterans who have recently died tested positive for COVID-19, the disease caused by the coronavirus.

There are several state and federal investigations into the deaths underway.

Bills aimed at expanding voting options in Massachusetts during the pandemic will be the subject of a virtual public hearing Thursday.

The bills propose a number of changes, including requiring the state to mail ballots to all voters before the November election and affirming coronavirus concerns as a reason to vote by absentee ballot in the September primary and November general elections.

The hearing is scheduled for 1 p.m. on the Facebook page of Sen. Barry Finegold.

A mother who contracted COVID-19 was finally able to hold her newborn baby girl about six weeks after giving birth.

Isabel Gonzalez, 34, of Chelsea gave birth on March 30 at Massachusetts General Hospital by an emergency cesarean section, and was then quickly distanced from her baby. Two days later, Gonzalez was rushed to the intensive care unit and ended up on a ventilator until April 26, when she was moved to Spaulding Hospital in Cambridge.

On Tuesday, Gonzalez finally left the hospital and was reunited with her baby.

Mass Audubon is gradually reopening trails at many of its wildlife sanctuaries across the state, although nature centers and other buildings, including bathrooms, remain closed.

The nonprofit said Wednesday the sanctuaries were selected based several conditions, including the ability to manage the number of people and cars expected.

Among the sanctuaries that have opened are Lime Kiln Farm in Sheffield; Nashoba Brook in Westford; and Tidmarsh in Plymouth.

Additional sanctuaries will opening in the coming weeks.

Six additional employees of the Bristol County Sheriff's Office and eight inmates have tested positive for the coronavirus in the past week, the office said in a statement.

Nine county inmates and one federal detainee have now tested positive, the Tuesday statement said. Seven other staff members have recovered from COVID-19 and returned to duty, while 11 employees remain away from work.