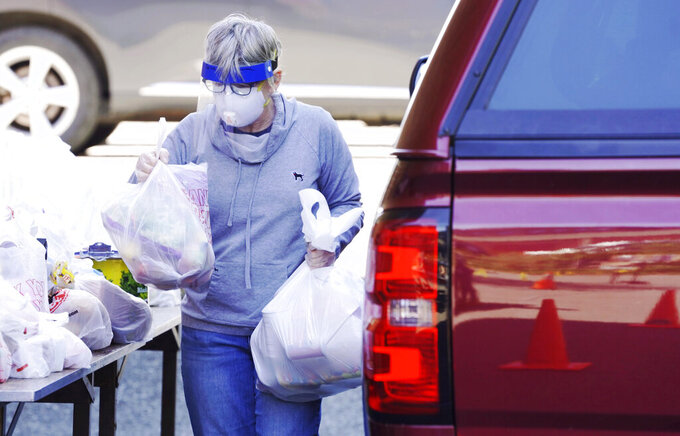 Becky Crane transfers food to a car at The South Congregational Church Food Pantry during the coronavirus pandemic, Wednesday, May 20, 2020, in Pittsfield, Mass. Additionally, the pantry operates a kitchen that serves up to 100 people per meal to go. All the food distribution is carefully packed and transferred without contact. (Ben Garver/The Berkshire Eagle via AP)

BOSTON (AP) — The number of COVID-19-related deaths in Massachusetts has surged past 6,000 as the state’s economy begins to reopen.

There were 128 new COVID-19-related deaths reported Wednesday, bringing the total number of deaths to 6,066 since the start of the pandemic. Massachusetts has recorded the third highest number of deaths of any state.

There were about 2,500 people currently hospitalized with the disease, down from more than 3,500 two weeks ago.

The number of deaths at long-term care facilities stood at 3,701 — or about 61% of all COVID-19-related deaths in the state.

Adapting to new COVID-19 work requirements will take some getting used to, but is essential to limit the spread of the coronavirus Gov. Charlie Baker said Wednesday.

“We get the fact that this is difficult for people,” Baker said.

The Republican made his comments during a visit to Symmons Industries, an 80-year-old Braintree manufacturer. Under Baker’s plan to gradually restart the economy, manufacturers were allowed to reopen this week provided they follow safety protocols.

At Symmons, those protocols include daily temperature tests and the use of masks and gloves when needed, said company CEO Tim O’Keeffe.

Just because a business is allowed to reopen, doesn’t mean they have to, Baker said. On Tuesday, Boston Mayor Marty Walsh said he was leery about one part of the plan which would let Boston offices bring back workers at 25% capacity starting June 1.

Baker said the guidance for Boston is up to 25%.

“We want people to do whatever they’re most comfortable with,” Baker said.

University of Massachusetts President Marty Meehan is recommending a tuition freeze for the university’s nearly 50,000 in-state undergraduates for the upcoming academic year.

Meehan made the recommendation Wednesday pointing to the financial hardships many families are facing because of the coronavirus.

The Board of Trustees Committee on Administration and Finance is due to set student charges at its June 10 meeting with a full board vote June 17.

The five UMass campuses are also in the process of distributing federal emergency aid to students who have incurred expenses related to the disruption of campus operations.

Two Boston-area Muslim groups have collected 40,000 face masks they plan to distribute to first responders, police officers, nursing home staff, medical workers and others on the front lines of the coronavirus pandemic.

The Massachusetts chapter of the Council on American-Islamic Relations and the Islamic Society of Boston Cultural Center in a statement Wednesday said the initiative is taking place in the holy month of Ramadan, during which Muslims are encouraged to perform acts of charity.

The project, led by a group of local Muslim physicians, obtained the masks through a fundraising effort.

“As Muslims, we’re humbled to be able to live out our faith by serving our neighbors,” Wael Alkhairo, executive director of the Islamic Center, said in a statement. “During the holy month of Ramadan in particular, it’s our duty to do everything in our power to ensure the safety of those around us.”

The New England Patriots and the New England Revolution are planning to plant a flag garden near Gillette Stadium to honor some of the state's residents who have died in the service of the nation.

The Massachusetts Military Heroes Fund usually plants about 37,000 U.S. flags on the Boston Common every Memorial Day to honor state residents who have died in wartime dating to the Revolutionary War. This year's event was canceled because of the coronavirus pandemic.

The organization instead asked people to plant flags on their lawns or post flags in their windows.

The Patriots and Revolution's foundations will gather volunteers Thursday to plant more than 2,500 flags to honor the men and women from Foxborough who have lost their lives defending the country.

Social distancing will be enforced.

Some residents of a Boston suburb are calling on the president of the city council to resign for holding a birthday party for her 21-year-old daughter that appeared to violate restrictions on large gatherings and social distancing guidelines.

More than 130 people have signed an online petition calling for the resignation of Malden City Council President Jadeane Sica, according to The Boston Globe.

Critics say the party — which included a DJ and was held in a restaurant parking lot — drew about 50 people.

Sica, in a lengthy Facebook post, wrote “I am guilty," and admitted some people might have gotten too close, but said the party drew mostly family and a few friends and lasted only about 30 minutes. She said police responded and reminded people to observe social distancing.