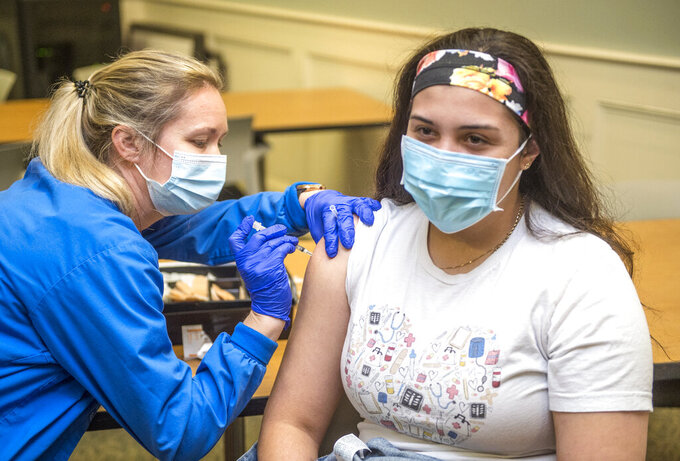 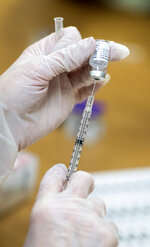 ATLANTA (AP) — Georgia now has more than 4,000 people hospitalized with COVID-19, with hospital admissions increasing at a pace that raises questions about hospitals' ability to handle demand.

“We are eager to see the vaccine make its way quickly and safely to our most vulnerable," the Republican Kemp said, speaking at a nursing home owned by the Pruitt Health chain, Georgia's largest nursing home operator.

More than 636,000 Georgians have now tested positive for the coronavirus. The state has moved into the top 20 for most new cases per capita in the last 14 days as infection rates have declined in the Midwest and risen in the South. Nearly 15% of those tested in Georgia have had the virus over the last week, the highest rate since early in the pandemic, although holiday-related changes in testing may be affecting that number.

More than 10,000 Georgians have died from the respiratory illness. While most people recover from the virus, it can be deadly for older patients and those with other health problems. Some people show no symptoms.

Nursing homes and other long term care facilities have been among the hardest hit. Of 42,000 residents, more than half have now tested positive for COVID-19, and more than 3,000 have died. Nearly 12,000 employees have also tested positive at 690 facilities tracked by the Georgia Department of Community Health.

Employees will be vaccinated first, followed by residents. State officials said nursing homes would be prioritized over assisted living facilities.

“If you think about it, the providers here at the long term care facility are the firewall protecting the residents,” Public Health Commissioner Kathleen Toomey said Monday.

Department of Public Health spokeswoman Nancy Nydam said vaccinations at long term facilities could be complete by sometime in February.

Georgia is receiving additional allocations of vaccines, with Toomey saying Monday that the state had now been allocated 234,000 doses of the Moderna vaccine and 268,000 doses of the Pfizer vaccine. That's up from 300,000 reported before Christmas. Nydam said much of that was for second doses that will be due to be administered beginning Jan. 4.

Toomey said 39,000 doses would initially be allocated to the long term care facility vaccination effort, which is being run by pharmacy giants CVS Health and Walgreen Co.

Kemp, who has declined to add to earlier measures meant to slow the spread of the virus, again asked for people to limit interactions on Monday. He noted that Northeast Georgia Health System, a four-hospital system based in Gainesville, continues to see increasing numbers of COVID-19 patients, even after it put beds in a gym to care for people with milder cases.

“We are essentially at capacity for what our staff can handle at this point,” Dr. John Delzell, who's overseeing the response for Northeast Georgia Health System, wrote in an email. He said surgeries are being delayed, the system is trying to fully use smaller hospitals in Winder and Dahlonega, and trying to shift patients toward beds with lower levels of care.

“The only way to extend capacity at our Gainesville campus further is to increase the number of staff which is not easy to do during this pandemic,” Delzell wrote. “We do not want to expand nursing ratios – which would mean having each nurse care for more patients.”

The governor said the state would reopen its overflow hospital at the Georgia World Congress Center in downtown Atlanta by the end of the week, the third time Georgia has opened the facility. On Monday, 25 hospitals statewide were reporting that their intensive care units were full or that they were entirely full, including five of nine hospitals in Fulton County, the state's most populous.